BlackBerry India has been trying its best to capture a good number of share in the Indian market and to do so, the company was quick enough to launch its latest BlackBerry Z30 smartphone in the Indian subcontinent which packs in a large 5 inch display. The device is priced at Rs. 39,990 and we recently got the review device to play along with. Is it worth the buy? Read along to know more. 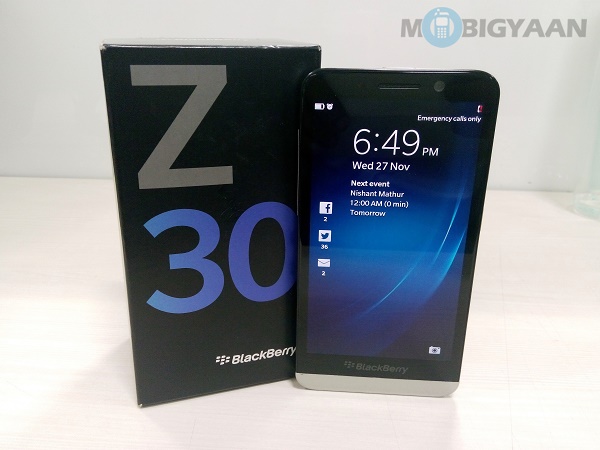 The BlackBerry Z30 is a sturdy 5 inch smartphone which has a premium built quality. The body is made up of high grade aluminium chassis, which the back of the device has a rubberized cover with BlackBerry’s Weave design which was also available on the BlackBerry Q10 which we reviewed earlier. On the front we have a great 5 inch HD display and above it, you will find the Speaker Grill, LED notifications light, front facing camera and proximity sensor. Below the display, you will find the BlackBerry branding and a microphone.

On the left, BlackBerry has placed the microHDMI port and the microUSB port. While on the right, we can find the Volume rockers and the secondary microphones for voice cancellation. On the back we have the 8 megapixel camera with LED Flash and the removable back cover which will give you access to the microSD card slot and the microSIM slot. On the top, we find the 3.5mm audio jack with the Power/Unlock button. BlackBerry has packed in a 5 inch Super AMOLED display which gives a has a resolution of 1280 x 720 pixels giving a pixel density of 295 PPI. The touch of the BlackBerry Z30 is responsive and we really loved using it. The sunlight visibility is one of the best amongst all the smartphone which we have reviewed recently. The brightness of the display is decent enough and when we combine the UI the color reproduction on the screen is good.

The BlackBerry Z30 is powered by a 1.7 GHz dual-core Snapdragon S4 Pro processor coupled with 2 GB of RAM and while you might feel that, in an age when smartphones are coming out with quad-core and even octa-core processors, the dual-core processor on the Z30 is quite enough for all the processing that the user might put the smartphone to perform. Multitasking on the BlackBerry Z30 is smooth but there were a few occasions when we did feel that the device didn’t respond and as the battery is non-removable, users might just feel panicked on how to restart the device. BlackBerry Z30 arrives with BlackBerry 10.2 OS out-of-the-box which brings in many new features like the Priority Hub which goes on to automatically out important message into the Hub so you don’t miss on any important messages. One interesting new feature amongst others which we really liked is the instant previews of BBM, Missed calls, Mails and more on the top of the screen. Also various improvements with the Copy and Paste, BlackBerry keyboard, Calendar and more good to use over the BlackBerry 10.1 OS. The internal memory on the device which we received was 16 GB of which about 10.7 GB will be available for users to take advantage of which will further be expandable using a microSD card up to 32 GB. The user interface on the BlackBerry Z30 is swipe based and new users might take time to get used to it but after a while you will get ‘addicted’ to it. The BlackBerry keyboard is something which I personally loved and I would rate it over the stock Android keyboard and even the Windows Phone keyboard. Overall, the UI is a pleasure to use. The Canadian giant has included an 8 MP auto focus camera with BSI Sensor, F2/2 lens with LED Flash which is also capable of recording videos at 1080p. On the front, the BlackBerry Z30 has a 2 megapixel camera which will enable users to make BBM video chats and video calls with their friends and family.

While using the camera, there are times when the focus is lost and users will have to refocus on objects. The macro performance of the camera on the BlackBerry Z30 is good and the colour reproduction is good. Check out the camera samples below. Connectivity wise, the BlackBerry Z30 has included 2G, 3G, 4G LTE (not supported in India), Wi-Fi, Bluetooth 4.2, micro HDMI and micro USB options for users to make use of. The reception of the network is good and we never faced any issue while using the device. The BlackBerry Z30 has a powerful 2880 mAh battery which gives some impressive backup to users which is a good thing for power users as they will go on to use for a good number of hours under heavy usage. We got about 12 hours of backup under normal usage which included switching between 2G and 3G network, chatting on BBM, push notifications, few hours of calls and more.

The BlackBerry Z30 has been priced at Rs.39,990 which, we personally feel is a bit too pricey for everything that the device has to offer as users could very well go in for a flagship Android smartphone for the same price. But if you are a power user or will not be hesitant in trying something new, then the BlackBerry Z30 is a nice buy.