Coolpad launched a Lite variant of Coolpad Note 3 with similar design and a fingerprint sensor attached at the backside. At a price of ₹6,999, the smartphone is kept in the budget segment. It also packs a 3 GB of RAM and a quad-core processor with 16 GB storage. Just like the Coolpad Note 3, the specifications of the Lite variant are killer at this price point and Coolpad may be hoping to get the same success the Note 3 made. Let’s see how the well it does in our Coolpad Note 3 Lite review. 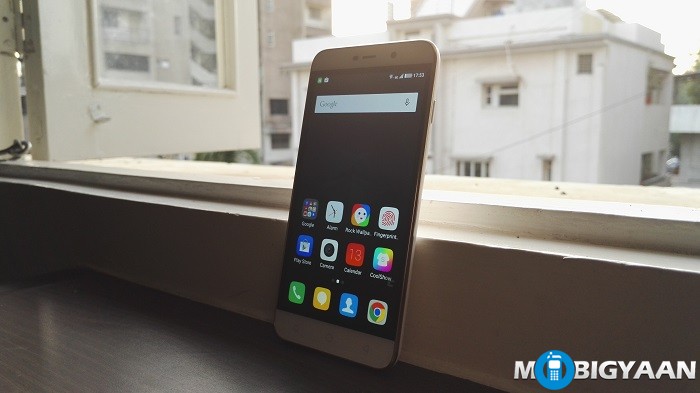 The 5-incher looks exactly the same as the Coolpad Note 3 but in a smaller form factor. It is light in weight (146 grams) and 8.9 mm thick. The front has a scratch resistant reflective glass that is prone to fingerprints. The device is made up of plastic materials though possess a good build. It can be used single handed because it has a 5-inch display. The top comprises of a 5 MP fixed focus camera while the bottom has capacitive touch buttons that do not light up, same as the Coolpad Note 3. The display bezel is made golden color to differentiate it from the Coolpad Note 3. It looks a tad premium, the golden and white combination. The back side has a 13 MP autofocus camera with LED flash. You can see the fingerprint sensor that you have already seen on the Coolpad Note 3. The speakers below are loud and clear. The textured back panel is removable and you can insert the SIM cards and a MicroSD card. Both of them look all the same on the front and on the back and you are yet to notice the difference of the microphone placement and the MicroUSB.

Moving to the left has a small power button while, on the right, you have the volume rocker buttons.

The top is kept the same as the Note 3 but at the bottom, the MicroUSB port varies followed by a microphone.

The Coolpad Note 3 Lite has 5.0-inch IPS LCD display with a resolution of 1280 × 720 pixels. For a budget smartphone, an HD display is pretty good overall. It is covered with a scratch resistant glass protection. The front glass is glossy thus prone to fingerprints. The viewing angles are fine and the screen is reflective thus you may not be able to read the text or see images clearly under direct sunlight though the brightness is enough to see under sunlight shade.

The Note 3 Lite uses a different SoC MediaTek MT6735 compared to the bigger sibling. It is powered by a 1.3 GHz quad-core 64-bit processor. What takes your attention is the only smartphone in its price to provide a 3 GB of RAM. A higher amount of RAM means you can multi-task even more but just that the processor is a quad-core, it doesn’t mean that the performance you get on the device is same as the other smartphones that give you 3 GB of RAM. The performance of the apps are good and we did not feel any big lags. The AnTuTu benchmark scored 27490 points the Geekbench 3 scored 501 in single-core performance and 1458 in multi-core performance. Everything is fair at this price point. Gaming on the device is not recommended because it struggles. Low-end games run fluently. Dead Trigger 2 ran fluently. Other games like Traffic Rider, Bad Piggies, Candy Crush Jelly ran all good. Asphalt Nitro was playable but the framerate showed that it was struggling quite a bit.

After hours of gaming, the Note 3 Lite remained cool thanks to the low power GPU. Mali-T720 takes out mainstream gaming. The temperatures according to the HW Monitor were around 34 degrees after playing the games. The FP Lock app is used to lock the apps using your fingerprint. When you open the locked app, you will be asked to unlock it using a fingerprint. It is an interesting feature and you do not need any third party apps that put PIN locks or Pattern locks. The Coolpad Note 3 Lite runs the same version Android 5.1 Lollipop with Cool UI 6.0. The UI is flexible and has a lot of options to play with. It doesn’t have app drawer so everything you see is on the homescreen. It supports multi-window and a small C that overlays on the screen for a few shortcuts. We noticed some interesting features in the CoolUI. You can change the wallpaper by shaking the device. The FP Lock can lock certain apps with your fingerprint. Some gesture controls are a double tap to wake up, slide to unlock, swipe down to open the camera, draw c for dialer, e for browser and m for music. The Note 3 Lite pairs a 13 MP and 5 MP cameras on the backside and on the front side respectively. It offers many options along with a pro mode to tweak the camera settings manually. You can adjust the focus, exposure, white balance and ISO sensitivity in pro mode. Other than that, it has features like Face Beauty, HDR, Dimlight shot, Smile shot, Panorama, and Gesture shot. We captured a few images to see how the camera performs and the results are quite similar to the camera used in the Coolpad Note 3. The back camera did a great job capturing the shots and for the price it holds, it is one of the good if not best cameras to get. The color reproduction of the images may differ somewhat but the output results are satisfying. The front camera is average but does the job for taking selfies.

The Coolpad Note 3 Lite has a 16 GB built-in storage and the user gets around 10 GB of free to use. The remaining space is taken by the Android system. Nevertheless, a MicroSD up to 64 GB can be used to expand the storage further. It also supports USB OTG that means you can plug and play the flash drives using an OTG connector or cable.

The 2500 mAh battery powers the device and lasts a day and a half on average use. On heavy use with 3G data and gaming, the battery cannot survive for a day. The battery is 2500 mAh but seems not too great when you perform various tasks on heavy load. On light usage, i.e checking notifications, SMS, some phone calls, and a few camera shots, it runs around 3 days easily in our tests.

We played games and ran few apps to check out the battery performance. Dead Trigger 2 took 7% of the battery in 29 minutes while the battery dropped 3% playing Traffic Rider for 10 minutes. Bad Piggies took 7% for playing 29 minutes and Candy Crush Jelly took 10% for a huge 42 minutes gameplay. It seems like the low-end games take less battery but high-end games may drop more percentage. 1 hour of Facebook app surfing took 12% battery while a 1080p video playback took 4% in 18 minutes. Please note that all the battery tests were done with Auto brightness.

In our battery charging test, it took 1 hour 15 mins to charge 90% battery and with the same results, you can expect the battery to charge fully in about 1.5 – 2 hours.

The Coolpad Note 3 Lite is available for a price ₹6,999 exclusively on Amazon.in. So far there is only white color variant available and just like the Note 3, Coolpad may also launch a black color variant with the same price tag.

The Coolpad Note 3 Lite will be available on Amazon on a flash sale. Registrations are starting from 28th January.

Being a younger sibling of the Coolpad Note 3, it is very much similar and people can’t tell the difference between them at the first glance. The specifications like the fingerprint sensor and 3 GB RAM at this price point is a steal. The battery is sufficient and the phone doesn’t generate heat but remains cool even during heavy usage.

People who have a tight budget and looking for a smartphone with some amazing specs can surely go for the Coolpad Note 3 Lite with a fancy fingerprint sensor at the back.