Honor has unveiled its latest smartphone, Honor 5C in India at a price of ₹10,999. It’s powered by in-house CPU, Kirin 650 instead of a Qualcomm Snapdragon CPU which was there in the Honor 5X. On paper, the specifications look very good, Honor 5C uses a 2 GHz octa-core processor (8x Cortex-A53), based on a new 16 nm FinFET fabrication tech found in various flagship chips including the Honor’s Kirin 950 and Qualcomm Snapdragon 820. Honor 5C could be a promising mid-ranger but before we come down to the verdict, we will share you our hands-on images on Honor 5C. The specifications seem promising as the smartphone houses a powerful Kirin 650 CPU. Also notable is the fast fingerprint scanner at the back as a fact we’ve been so far impressed with all the fingerprint scanners available on the Honor devices, be it Honor 7, or Honor 5X. By seeing the specs, we don’t think they look weak rather boasts quite a mainstream specifications for this price segment. It also has a 2 GB of RAM and 16 GB of internal storage which can be expanded using the micro SD card in hybrid SIM tray. That being said, we would glad to see if the Kirin 650 competes with the Qualcomm Snapdragon 650 seen in the Xiaomi Redmi Note 3.

As far as the design goes, the Honor 5C takes on the metallic back with a fast fingerprint scanner. The handset is sized at 5.2-inch i.e. decent in terms of comfort, holding it in one hand is easy. It uses an IPS display with full HD resolution (1920 x 1080 pixels). Speaking more of the design, the smartphone isn’t fully metal, the sides are made of plastics but it does tend to look like metal from far due to its glossy finishing. The overall appearance seems quite unique due to its mixed plastics and metal plate at the back. The front glass isn’t Corning Gorilla Glass yet seems to be a decent scratch resistant glass, however, I do prefer a Gorilla glass at this point. The screen surface isn’t quite smooth as rest of the smartphones we know and it gets smudges often when you use it.

On the back and the front, the Honor 5C has a 13 MP f/2.0 single LED flash camera and 8MP with f/2.0 front-facing camera respectively. Further resides is the neat fingerprint scanner at the backside. Below you will find the Honor branding so as on the front. Honor 5C didn’t use any external touch buttons rather internal on-screen buttons taking a portion of space on the display. 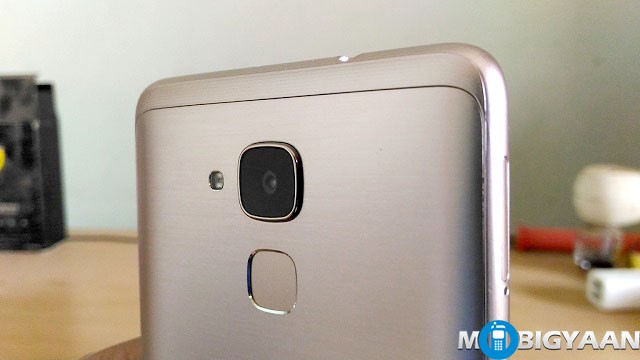 All the buttons are kept on the right side, the power button and the volume control buttons. On the left, there is one SIM tray supporting dual SIM. The Honor 5C supports 4G network. It uses a hybrid dual SIM tray that means you can insert two nano-SIM cards (GSM + GSM) or one nano SIM card plus one MicroSD card (GSM + MicroSD).

The bottom has a standard Micro USB port, a microphone, and loudspeaker on the right grill. The top has another microphone and a 3.5 mm audio jack.

It can be a big challenge for the smartphones like Moto G4 since the Honor is offering some really top tech at this price. We can’t wait to check out the device in more detail to come down with a verdict. Till then share your views about Honor 5C and let us know what you think.

Samsung Galaxy On7 (2016) spotted on GFXBench with Snapdragon 625 SoC