Yesterday we shared with you the hands-on images of the LG Optimus G Pro phablet which was launched in India last month for Rs.42,500. The G Pro is being aimed as a direct competitor to the Samsung Galaxy Note II. But does it succeed? Read on to know about it. 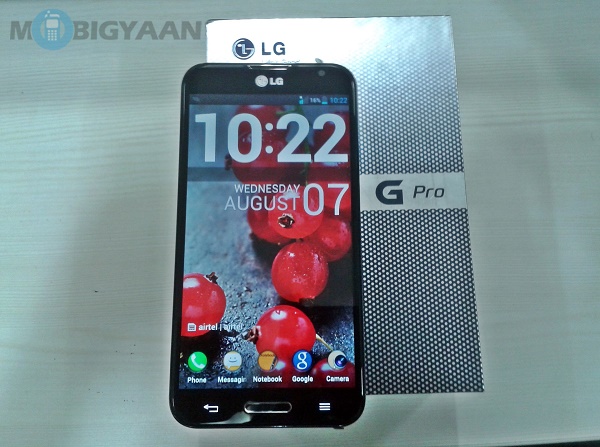 To start with, let us take a look at the specifications of the LG Optimus G Pro below:

In the Box, LG has packaged: The LG Optimus G Pro measures 150.2 x 76.1 x 9.4mm which is not fits very well in hands and you hardly feel that you are holding a 5.5 inch phablet as the company has fit the huge screen with thinner bezels. The 5.5 inch True HD IPS panel on the LG Optimus G Pro is a treat and LG has indeed worked hard on making it almost perfect as the colors are crips and accurate. The display is very sensitive and the responsiveness is brilliant which might make a lot of users happy. Users can even use their fingernails to write something on the display as the screen is sensitive enough to detect input. Coming to the sunlight visibility, this is where we felt that the G Pro’s display starts to go downhill. We found it a little tough to use the device even with full brightness and this might not please a few of you who are out of their office for long hours. A 13 MP camera with LED Flash which is capable of shooting videos at 1080p can be found on the back of the LG Optimus G Pro and the sensor takes some nice shots in all conditions. The camera UI is nicely baked and LG has included an Intelligent Auto Camera Mode which detects the conditions automatically and chooses the right camera mode to get the picture right. Apart from this, users can select from an array of camera modes which includes Panorama, Burst Shot, HDR, Beauty Shot, Dual Camera and VR Panorama. VR Panorama allows you to take a 360 degree panorama image and stiches it into one, in the same way as Photosynth works on Windows Phone devices. One of the best features which I personally liked on the 13 MP camera of the Optimus G Pro is the option to manually focus on objects we wish to capture.

Overall, the images taken from the camera turn out to be good enough but there are times when noise enters the scene but the colours are almost accurate. The camera on the LG Optimus G Pro takes some brilliant macro or close up shots and really impressed us. The front facing 2.1 MP camera is also capable of capturing videos at full HD resolution and video chats turn out to be clear. The LG Optimus G Pro runs on Android 4.1.2 Jelly Bean OS out-of-the-box which now seems to be outdated given that Android 4.3 Jelly Bean is already official. We expect the company to release a Android 4.2 upgrade for the smartphone soon but overall the experience on the current version is good enough too. LG has nicely customized the OS with its own Optimus UI and I persoanlly loved the deep customizations from the company. One cool feature is the swipe to unlock which has a very nice effect of a dew drop and users can see the contents of the homescreen while unlocking their devices. Even while the device is locked, double clicking the hardware home button will display the QuickRemote which will allow you to control your devices without even unlocking the phone. The notification panel on the smartphone is a very busy place as LG has packed in a lot of options to control the device right from this panel and not forcing users to go into the menu options as they can control Wi-Fi, NFC, Bluetooth, Hotspot, Miracast, launch QuickMemo and QuickRemote right from the panel. Just under the panel, LG has included access to various QSlide apps which can be used anytime.

There is so much more into the UI and we just tried to sum it up in the screenshots below. The LG Optimus G Pro is powered by a 1.7 GHz quad-core Snapdragon 600 processor coupled with 2 GB of RAM which ensures that the device runs without any lags and the performance of the smartphone is great. Heavy games run smoothly and you will just love playing them on the device. Also multi-tasking is buttery smooth and the device responses even when you open multiple apps.

The speaker on the back of the device is good enough for your music-listening experience while when you connect the earphones to the 3.5mm audio jack, you can experience Dolby Surround Sound experience which can be selected from the settings in the Music Player. Connectivity wise the LG Optimus G Pro arrives with options like 2G, 3G, Bluetooth v4.0, microUSB v2.0, DLNA, Wi-Fi, Miracast, IR Blaster, 3.5mm audio jack, NFC and Wireless charging thus giving users a lot of options of connectivity. The battery on the LG Optimus G Pro is of 3140 mAh which is huge but given that the smartphone has a big full HD display and a lot going under the hood, the battery backup is something which a bit disappointing. The display takes a toll on the battery but the backup last about a day when you keep the brightness of the device to the minimal and make a decent number of calls, SMSes and keep using the device for mails and keeping in touch with what’s happening on the social network. At the end of the day, you will need to charge the LG Optimus G Pro before you hit the bed. With the LG Optimus G Pro, the company has tried to strike the right chords with the consumers as users are finally moving on to smartphones with larger displays. LG is targetting the users who are looking for an alternative to devices like Samsung’s Galaxy Note and the way the LG has customized the UI and made available various interesting apps including QuickRemote and QuickMemo things do get interesting on the G Pro. When we combine the nice display with the 13 MP camera and performance of the device, the LG Optimus G Pro scores another point but it loses one when it comes to the battery and the hefty price tag of Rs.42,500 (MRP). We really wished LG has included a stylus on the G Pro as the device feels too alrge for one handed operations. Overall, if you are not into Sammy and are looking for an alternative with a great UX, the LG Optimus G Pro is all your to grab.