realme’s latest Narzo Series smartphones include the Narzo 50A and Narzo 50i, the former is a midranger while the latter is an entry-level smartphone. The newly launched Narzo 50A is powered by MediaTek’s Helio G85 octa-core SoC, a new 50 MP camera on-board, and offers a massive 6,000 mAh battery. Here’s what our hands-on and first impressions say about the smartphone. 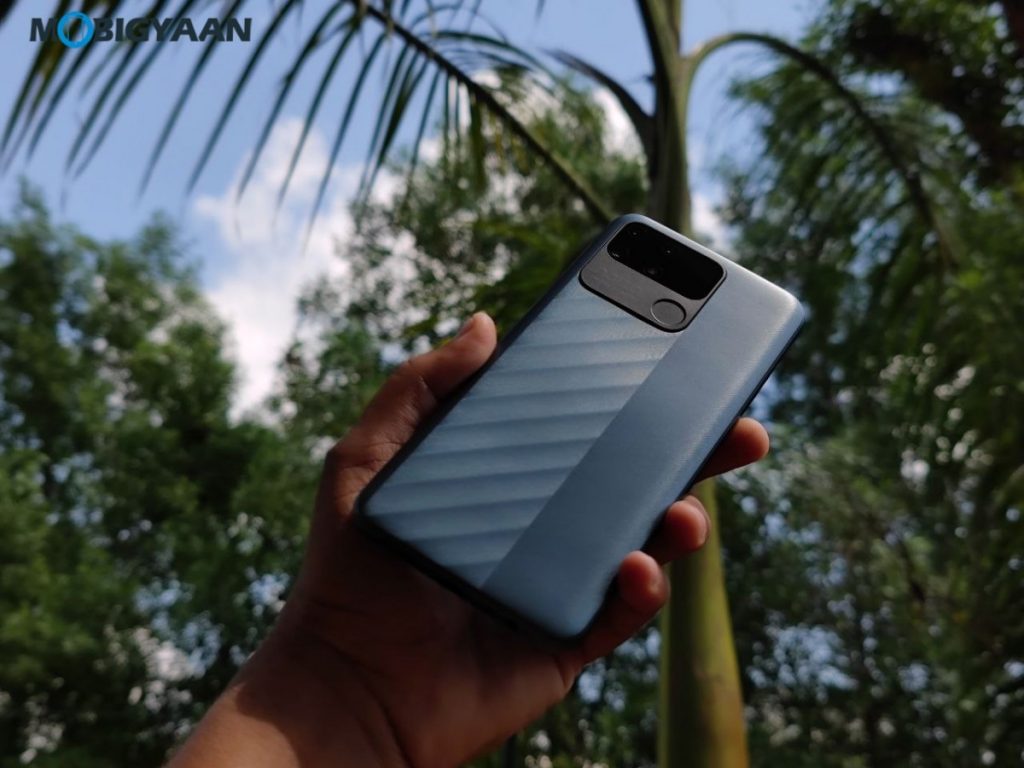 The realme Narzo 50A is the successor to the realme Narzo 30A, the new upgrades include a camera system (50 MP primary camera) as the smartphone’s major highlight while the other perks include realme UI 2.0 based on Android 11 and offers a higher storage variant i.e. 128 GB.

It’s 4G! Yes, the realme Narzo 50A still uses an LTE instead of the 5G due to the same Helio G85 chip carried over from its predecessor. Even though there aren’t many 5G smartphones in this range, realme could use it as an advantage to compete with other players.

The backside has a huge camera system that holds triple lenses, 50 MP f/1.8 being the primary camera, 2 MP as a Portrait lens, and a 2 MP Macro lens. Just below the lenses, you will find a fingerprint scanner and a large Narzo branding. The front has an 8 MP  f/2.0 camera for selfie needs.

The phone has a polycarbonate back with a matte finish surface and diagonal stripe design, quite similar to its predecessor. The color variants include Oxygen Blue and Oxygen Green.

The right side has a power button and volume rockers whereas the left side hold a triple-slot SIM tray with dual 4G SIM card slots with dual standby and a dedicated slot for the microSD card.

At the bottom side, you will find a USB Type-C port for charging, a 3.5 mm jack for earphones/headphones connectivity, a single microphone, and loudspeakers. The top side has nothing, no second microphone was found on the phone.

The realme Narzo 50A runs on the latest realme UI 2.0 with Android 11 out-of-the-box and a security patch dated 5th July 2021. The user interface offers loads of features and customizations in addition to all the native features of Android 11.

In our initial use, the UI seems smooth and works fairly good, the MediaTek Helio G85 appears to be a decent performer. However, you do get some bloatware that can be removed if you don’t need it.

On the performance side, it packs a 12 nm MediaTek Helio G85 octa-core CPU for the processing which is the same SoC found in the Narzo 30A. Here’s a screenshot of the about section showing you the specs.

The battery on the realme Narzo 50A is quite large, the 6,000 mAh battery seems to be long lasting and also offers fast charging of 18W. You can expect a similar battery performance of its predecessor, the Narzo 30A.

The realme Narzo 50A offers a large battery, a good camera on-board, and decent performance. For Narzo 30A owners, you will mainly get a better camera upgrade while most things remain the same, but the good thing is it now comes in a 128 GB storage variant and the base one starts with 64 GB storage. The RAM is no longer 3 GB, but 4 GB and lastly, the realme UI 2.0 with Android 11 out-of-the-box.