The Xiaomi’s Redmi Note is an affordable phablet powered by a MediaTek’s octa-core processor. It is the only phablet in the market that is available at under Rs 10000 that packs a high end specification list. It has a 13 MP camera and a 5.5 inch IPS display protected by a corning gorilla glass 3. It run on a older version of Android, the Jelly Bean 4.2.2 but completely forked by the MIUI ROM and you don’t actually feel the need for a newer OS. The Redmi Note will go on sale from December 2nd and will be available for Rs 8999. Later in December, Xiaomi will launch the 4G version of Redmi Note, priced at Rs 9999. 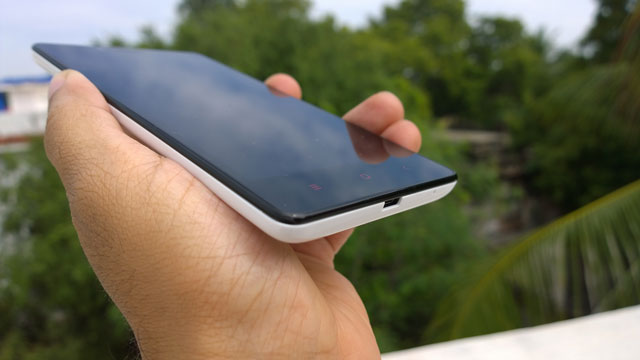 The Redmi Note is a large phablet. It is completely constructed by plastic. It weighs 200 grams, but it doesn’t feel heavy due to the equal weight distribution. It has a 5.5 inch display and it surounded by thick bezels, which makes the device larger than other devices with similar display. The display is a 720p display. The plastic back panel is glossy and flimsy when detached. When attached to the phone, it fits in solidly and give an nice finish to the mobile. Though it is a finger print magnet, the glossiness does not mean is it slipper. On the contrary, it enhances the grip, surprisingly. The contours around the phone gives you a pretty comfortable grip. The Redmi Note runs on a MediaTek MT6592 octa-core processor clocked at 1.7GHz. It has 2 GB of RAM and 8 GB of internal storage. The microSD card allows storage expansion by another 32 GB. The primary camera is a 13 MP camera while the front facing camera has 5 MP sensor. The Redmi Note has a 13 MP rear camera and its results surprises me. The results are quite sharp and the images pack in a lot of details with optimal color saturation and decent color reproduction. The macro shots are really commendable. The lens arrangement lacks optical image stabilization and there is not software enhanced stabilization algorithm as well. Also the low light perfromance is not upto mark. This is due to the lack of BSI sensor. Xiaomi has managed it keep the camera simple and yet functional. The camera UI is the same which we had seen in Redmi and we had talked about it in our review already. So ill skip it. The front facing camera is a 5 MP wide angle lens which gives decent output for selfies and video calls. The Redmi Note runs on a older Android 4.2.2 Jelly Bean. It is very unlikely that it will be ever upgraded. The Redmi Note 4G variant will run on Android 4.3 and could eventually receive further updates, but not the 3G variant. But I would never worry about the Android version on a Xiaomi device. Xiaomi devices run on MIUI Custom ROM which has its own set of unique functionalities and design language. Xiaomi assures that the Redmi like another MI phones will receive regular MIUI updates. As far as the features are concerned, there is nothing different from the earlier MIUI running Xiaomi devices that we haven’t covered in detail already and ill skip it for now. But one noteworthy feature is that the Lite Mode is retained from Redmi 1s. Lite mode helps senior citizens and differently abled people to access the phone features effectively.

The octa core mediaTek processor is a true 8 core processor and has the ability to utilize all the 8 cores at the same time. Also the device packs a 2 GB of RAM and a dedicated ARM Mali 450 GPU. I played some graphic intensive games like the Asphalt, Powerbot and NFS. The frame rate was nearly smooth and the graphic rendering was smooth. The device did not heat up. The Quadrant benchmark test gave it a score of 15961 while it scored 31474 in AnTuTu. While these scores are not on top of the charts, they are pretty decent for a device which is priced at Rs 8999 and performs better than what the scores indicate. Redmi Note is powered by a 3200 mAh Lithium Ion Polymer battery. It is removable and user replaceable. In my experience I have found the Li-Po battery gradually get better on usuage. I have spent 2 days with the Redmi Note so far and for my normal usage, it lasts a little longer than 1 day. But it takes over 3 hours to charge, though it comes with a 2A charger. But as I said, Li-Po battery will get better on usage, if not worse. People who have got the Redmi 1s usually complain about heating issues. Also there is a myth that Xiaomi is mishandling privacy data. With the Redmi Note, I can assure that there is no heating issues or whatsoever. The device stays well under 31 degrees under all conditions so far. Also if you are worried about using Xiaomi’s privacy policies, better not activate the cloud messaging feature. The Redmi Note is a good looking posh and stylish phablet. At Rs 8999, it offers the best value for money. However, if you could wait a little longer, I would suggest to buy the Rs 9999 priced 4G variant of the Redmi Note which will be available soon.