by Rishabh Jain
in Reviews, Samsung

The rise of ‘Mini’ smartphones is a trend that is picking up in the smartphone industry. Minis are actually smaller version of flagship, generally big screen phones. 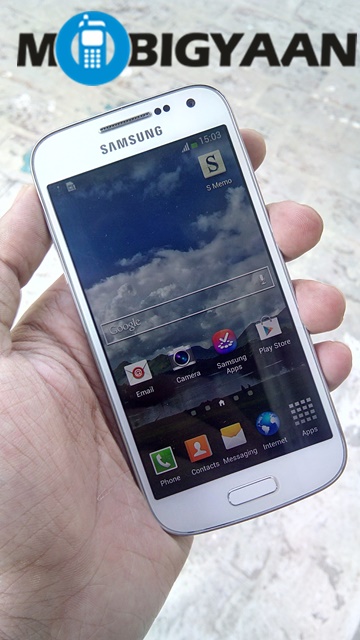 While every company is leaning towards par 5-inch screens for every flagship phone, the truth is that an ideal screen size still rests somewhere between 4-5.5 inches and no company has been able to get it right. So what’s the next best thing to do? Well, it is to launch a smaller screen device, which will be a lighter and smaller both in terms of specs and price and will be a win-win for both the company and the consumer – one gets a new consumer base, while the other gets more to choose from.

The Galaxy S4 is a special phone for Samsung, since it is that one phone along with the Note series, which helped smartphone claim the #1 smartphone company tag from Apple. Does the S4 Mini match up to the flagship handset? Read on. The Packaging on this phone is pretty much the regular Samsung deal – the box will remind you of the S4. Apart from that, it comes with Samsung in-ear headphones, a data cable and a USB charger. As far as looks go, the handset is stunning. It is nicely crafted and easily fits in the palm of your hand. It has smooth edges and a plasticky form factor which somehow still exists on even the most premium Samsung handsets.  The handset comes with a 4.3-inch touchscreen. The touchscreen performs good but has a little problem with sunlight visibility. Below the display, there are three capacitive buttons, which are easy to use. Besides this there is a layer of a silver metallic strip around the handset which lends it class. The handset comes with the elongated home button which is the general Samsung fare. The handset has a volume rocker on the left, a 3.5-mm jack on top and a power button on the left. The USB/charging port is located at the bottom.

The only problem is that the handset is a bit too smooth and you might end dropping it, so getting a good cover is advisable. The back of the handset has its 8-megapixel camera. The back pops out easily and you can easily insert your MicroSIM card inside. The smartphone runs on Android 4.2.2 – Jelly Bean OS. If you have used the Samsung Galaxy Mega or Grand, there isn’t much difference in the UI. It has the same wallpapers and themes. The app layout is easy to use. The only word for the UI is smooth. The Android and UI are easily accessible. What’s different is that the phone comes with a Blocking Mode and Driving mode. There are features such as Safety assistance, which sends out messages in case of emergency. You can use DLNA to share content along with screen mirroring and Kies. You can use Samsung’s social network – Chat on, or its linking service i.e. Samsung Link which you could actually use to connect it to a TV or PC. Then, there are features such as S Planner, S Memo and Samsung Hub. Two other features worth mentioning are Trip Adviser and Watch on which lets you using it as a remote for other devices. The Camera is a bundle of pleasant surprises. Whether it be indoor shots or outdoor shots, this one will not disappoint. The clarity beats many higher spec smartphone cameras in the market. The camera software works well, and you can use a variety of filters and modes available. The Samsung S4 Mini comes with a great music player and FM radio. Both are easy to use and so is the voice recorder. The video and audio play pretty fine. The speakers at the front and back work pretty well.

The Samsung S4 Mini is a handset is a charming one. At around Rs. 25,000 it is quite a great handset for its price. It has a great form factor and a great camera on-board. The handset is easy to hold and easy to use.

If you have a fad for the S4, the S4 Mini wouldn’t disappoint. It is lighter to hold and lighter on the pocket.

The S4 Mini, in our book is one of the most value for money handsets in the market.