The Samsung Galaxy A7 sports a 5.5 inch full HD Super AMOLED display. It is powered by a homegrown Exynos 7580 octa-core 1.6 GHz CPU, Mali-T720, and 3 GB RAM. Other highlights are 16 GB internal storage, a fingerprint sensor on the home button, and a 13 MP primary camera that supports Optical Image Stabilization.

The Samsung Galaxy A7 has almost the same looks as the Samsung Galaxy A5. It is slightly bigger in size yet looks the same from every angle. It justifies the use of Galaxy S6 design i.e. it’s sleek with a gorilla glass placed on both sides, front and back, giving you a premium feel so when you hold the device in your hands, it feels like you are holding the flagship Galaxy S6. 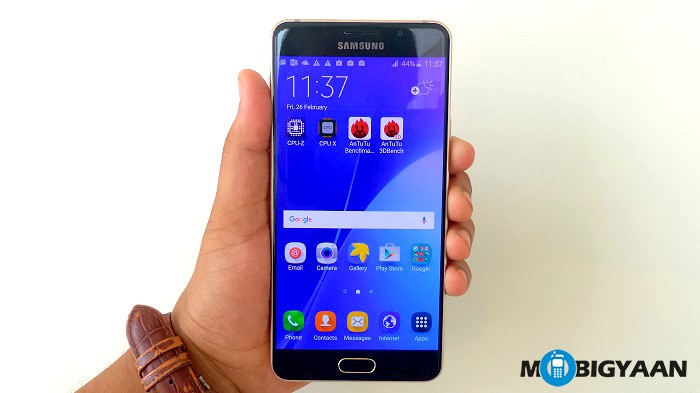 The design is completely changed from its predecessor Galaxy A7 which used a whole metal body, but here, you will find glass all over the body with a metallic frame covering the sides. Just like the Galaxy A5, the back is not removable due to its unibody design. The 3300 mAh battery is grown bigger compared to the 2900 mAh battery on the Galaxy A5. 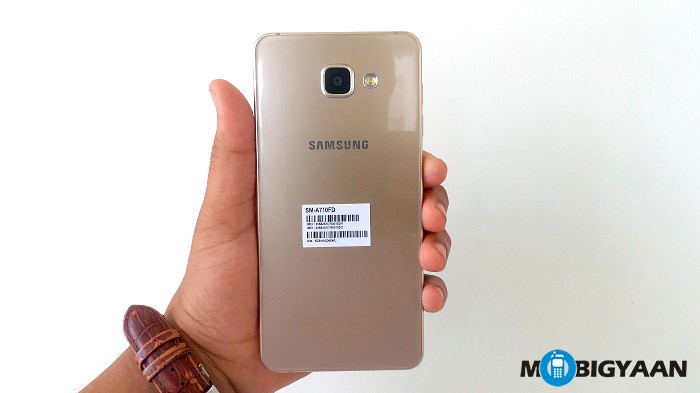 The same curvy edges can be found on the smartphone just like the Galaxy A5. The Samsung Galaxy A7 has no sharp edges thanks to its rounded 2.5D edge. On the back, it holds a 13 MP f/1.9 camera with OIS (Optical Image Stabilization) along with an LED flash.

You will also find a 5 MP f/1.9 camera and some sensors on the top. Below, on the screen, there are touch keys which do light up and a fingerprint scanner on the home button.

There are 2 microphones, one placed on top alongside a Nano-SIM tray and another placed at the bottom that has a 3.5 mm audio jack, a Micro-USB port, and a speaker grill.

Moving towards the left, you have two different volume rocker buttons that give a nice tactile feedback while on the other side is a small power button and another SIM tray that includes a Micro SD card slot as a combo.