Samsung continues the On-series by unveiling a new smartphone Galaxy On8 in India at a price of ₹15,900. It was announced exclusively on Flipkart’s Big Billion Day Sale and the price was slashed to ₹14,900 for a limited period. Now it’s back to its original price. This device boasts an AMOLED display where no other On-series smartphones offer. I have shared the Samsung Galaxy On8 hands-on below. 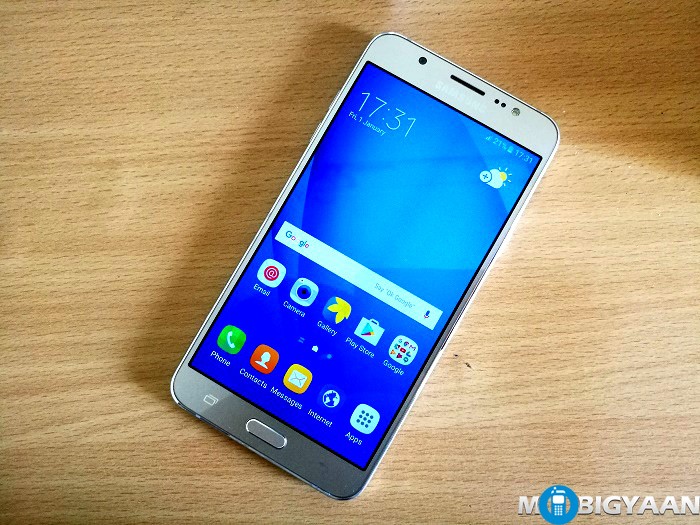 On paper, the Samsung Galaxy On8 specs look promising until you compare with the Chinese phones that offer more features. Samsung is trying to stretch its phones gradually to every price category. The competition from other brands especially Chinese are on fire and Samsung could have a hard time holding onto its devices. But this is where the Galaxy On 8 remains intact with its 5.5-inch AMOLED display. It’s, however, the first On-series smartphone with AMOLED screen.

Galaxy On8 features a home-grown octa-core processor ‘Samsung Exynos 7580 Octa’ with 3 GB RAM. The Exynos SoC uses eight Cortex-A53 cores which are 64-bit clocked at 1.6 GHz frequency. Further, it has a 16 GB internal storage which can be expanded using MicroSD. I think that Samsung must offer a 32 GB storage instead to stay in the competition since 16 GB internal memory can be too mainstream even Apple dropped it for their entry level iPhones.

Nevertheless, Galaxy On8’s tough spot is its AMOLED display gaining more impressions on its display quality. It flaunts a 5.5-inch full HD AMOLED display (1920 x 1080 pixels resolution with 401 ppi pixel density). This is probably the top variant device of the On-series and hence, offers better specs than the previous Galaxy On5 Pro and Galaxy On7 Pro devices.

On the design point of view, it has the same look as the rest of the On-series phones, side metal frames, diamond cut edges and brushed metal back cover which can be removed to insert the 3,300 mAh battery. It appears to be like the cameras aren’t been upgraded, at least on paper and keeping the same design will only make the device losing the spot as these Chinese devices are already ahead in the race. Notwithstanding, AMOLED will emerge a clear advantage overall for Samsung devices.

Galaxy On8 features 13 MP f/1.9 rear camera with LED flash. On the front, it has a 5 MP f/1.9 camera surprisingly with LED flash. I think Samsung should hang on with its front LED flash and AMOLEDs in all devices, this could lead a better specs than average, at least I hope so.

Samsung Galaxy On8 comes with a separate 3,300 mAh battery that can be placed by removing the cover. The Samsung Galaxy On8 is a 4G handset with VoLTE-enabled. It supports 2 Micro SIM cards (GSM + GSM). It also supports MicroSD card to expand the storage any further.

No matter, it still uses a Micro USB port at the bottom where other smartphones are moving to USB Type-C; as far as Samsung’s flagship devices are on Micro USB, it is expected for all major. Good thing, it has a 3.5 mm headphone jack.

On the software front, it is having Android 6.0.1 Marshmallow with TouchWiz UI. It doesn’t offer a fingerprint scanner at this price and that could be disappointing for some peeps. On8 also has the Ultra Data saving and S-bike mode features with NFC. The companion, Galaxy On7 Pro doesn’t offer NFC on it.

The new Samsung Galaxy On8 is available in Gold, Black and White colors. It is available exclusively on Flipkart at a price of ₹15,900.

Still, there’s Samsung Galaxy OnNxt soon getting my hands on wondering what’s behind keeping the ‘Nxt’ name. If I would have any reason to buy On8, that would be its AMOLED display. I also liked the stuff such as its 1.6 GHz processor. Exynos CPUs have an edge over Snapdragons, they tend to heat less as far as I know. In addition, the memory controllers are far better and faster in my opinion. The cameras although appear average on paper, however, the performance of the camera will be a lot better than the same specs on other smartphones I am assuming. The overall package I believe is worth the brand if not worth than some Chinese flagship offerings.

Do share your thoughts about the Samsung Galaxy On8 smartphone in the comments below.

OnePlus to announce new handset on November 15; Could be OnePlus 3T