Spice Stellar Mettle Icon was launched back in March as the latest addition to Spice Mobile’s Mettle range. It’s priced at Rs. 6,999 and thanks to its metal body, an 8 MP camera and good enough specs, the device makes a good case for itself. The low end smartphone market has become an interesting market, thanks to a plethora of Android smartphones and because of devices such as the Lumia 520, 525 and the just released Moto E. Let’s see if the Spice Stellar Mettle Icon manages to stand up against the competition.. 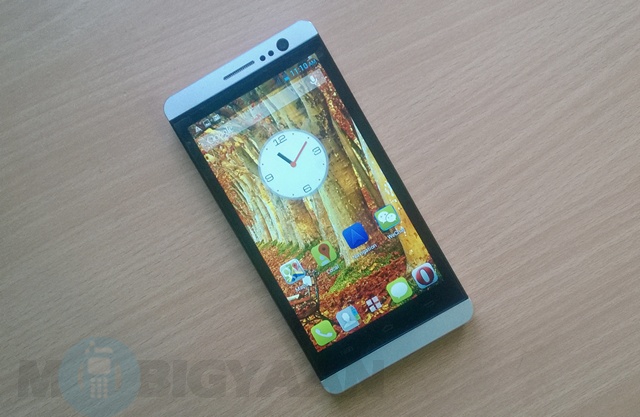 The retail box of the Spice Stellar Mettle Icon features everything we’ve come to expect from a modern smartphone but they throw in a Flip cover as well, which is much appreciated. The box contains: We all love metal phones, don’t we? The Spice Stellar Mettle Icon features a cool looking metal (and plastic) design. The first thing you’ll notice about the Mettle Icon is its uncanny resemblance to the HTC One. The front features a similar design with a black bezel around the display with metal rims at the top and the bottom. You’ll also notice that the device is also pretty bulky. The device measures in at 145 x 72.9 x 9.6 mm and weighs in at 177 grams. The front of the device incorporates the 5-inch display, with the bottom featuring the three capacitive buttons for menu, home and back. The capacitive buttons do offer haptic feedback but they are not backlit. The top of the front features the front facing camera along with the usual sensors and a speaker. The back of the device features a metal finish in the middle, with the top and bottom having plastic enclosures. The back houses the 8 MP camera unit with LED flash and the speaker at the bottom. The right side of the device features a micro USB port at the top while the left features the lock button along with the volume rockers. The top of the device has the 3.5 mm jack while the bottom is devoid of any action. The back of the device is removable, so you can always have an extra battery to swap in while you’re travelling. The back’s inside also houses the two SIM card slots along with the microSD card slot. We must say that the Mettle Icon is a handsome looking device. Sure, it is rather bulky but we are pleased with the design of the device. The phone feels great in the hands and the metal finish sure adds to the zing. The HTC One resemblance might work in its favour or not, depends upon you, the consumers.

The Spice Stellar Mettle Icon features a 5-inch display with a modest resolution of FWVGA (854x480p), which makes up for a ppi of 196. The display is pretty vibrant and the colors too come out okay. The viewing angles are okay but the display is very reflective, which makes a negative impact on it. At indoors, the display looks great but due to its reflectivity, it can be hardly seen under direct sunlight. The Auto Brightness adjuster also is on the buggy side, so we’ll suggest you to suggest to adjust the brightness manually when you go outdoors. Other than that, the touch responsiveness is fine although the display is pretty glossy and is prone to fingerprints. All in all, we can say, we are happy with the display unit Spice has used on the Mettle Icon. At its price, the 5-inch display is decent enough for you to enjoy videos and games .

The device comes with Android 4.2.2 Jelly Bean on-board and it’s mostly the stock Android we love. Spice has changed the icons and also brought in some interface changes but most of the changes include changing of the color pallet and other minor things, which aren’t intrusive at all. Spice has brought in some of its own features adding to the Android experience. There’s Flip to mute, Auto call recorder, Intelligent answer mode, Direct call and M Tracker. Intelligent answer mode lets you answer calls by bringing the phone to your ear while Direct call lets you make a call directly by just bringing the phone to your ear when you are into a text conversation or in the phonebook. The video and music players the device comes with are pretty basic but they play most of the formats you want. In case, they aren’t as feature rich as you would want, you can always have different apps from the Play Store. For your music, the device also comes with Google Play Music on-board.

We have one big qualm with the user interface, there’s no multitasking/recent apps window. Yes, you read that right. While some devices bring up the multitasking windows through a dedicated multitasking button or by press holding the home button or menu button. Last year’s HTC One featured a double tap on the home button to bring it up. Sadly, on the Mettle Icon, there’s no way to bring up the recent apps. This is pretty strange and we don’t know why Spice has done this. We hope Spice manages to fix it through a software update.

Summing it up, the user interface is simple and  stock Android and we like it that way. Hopefully, the multitasking issue will be fixed soon. The icons do seem to be a lift from iOS but you can always change them, thanks  to the level of customisation options available in Android.

The device features a dual-core MediaTek MT6572 chipset clocked in at 1.3 GHz along with Mali 400 GPU and 512 MB of RAM. The device is surely not a benchmark hero but we expected decent performance out of it and we kind of got that.

The device performs the basic tasks well but heavy apps and graphics intensive games sure take a toll on the device. Thanks to the multitasking issue, we mentioned above, you cannot close the apps, which makes the 512 MB RAM insufficient. You can get some apps from the Play Store to kill apps running in the background.

Here are some of the benchmark tests we did on the device. The results were okay considering its chipset. While the less amount of RAM does prove to be an hindrance in the performance, the device works pretty well most of the times. Spice Stellar Mettle Icon packs an 8 MP rear camera with an LED flash. We did not expect the camera to do wonders but we expected it to be decent but well, we were a tad disappointed with its performance.

The camera interface is the usual stock interface we have come to expect from Android 4.2.2 Jelly Bean, nothing new here. The right features the capture button for both snaps and video along with the Settings button and Gallery. The Settings menu buries the other options such as scene mode, color effect, white balance, time lapse interval, continuous shot and more. The left features a pane consisting of the HDR mode, Panorama and Smile shot. The top right features shortcuts to flash and a button to switch to the front facing cam. Talking about the performance of the camera now. The 8 MP number on paper does sound good but as we have come to know, megapixels aren’t everything. The camera performance is below par on this device. Snaps taken in bright light come out decent but the phone fails to focus well. There’s also no touch to focus here, which could have solved the problem. In dim and low light, the camera produces a lot of noise, which ruins the experience. The pictures come out a bit fuzzy. Check out some of the pictures we took from the Mettle Icon camera below: The primary camera has the ability to capture 720p videos and as with the stills, the video performance isn’t too great either. The videos lacked detail and sharpness and it’s slow to focus. The device features a 1.3 MP front facing camera and as we expected, it is okay and works.

Well, we did not have much expectations from the Mettle Icon’s camera but we were still a tad disappointed. The focusing bug is one of the main culprits here and we hope Spice fixs it up with an update.

The connectivity is well covered on the Spice Mettle Icon, as we have come to expect from modern days smartphones. The phone comes with Dual SIM support and there’s 3G support on both the SIM cards. Other connectivity options include WiFi, WiFi Tethering, GPS, AGPS, GMS, Bluetooth. The device also comes with the usual array of sensors like the Proximity sensor, Light sensor and G-Sensor. We would have said a week back that the Spice Mettle Icon, priced at Rs. 6,999 is a good buy but with the introduction of Moto E, things have changed. It surely has some strong points like the good build quality and great battery performance but there are also some issues with the camera and the user interface. If you want a good looking smartphone with some good battery life, then the Mettle Icon might be the one for you.