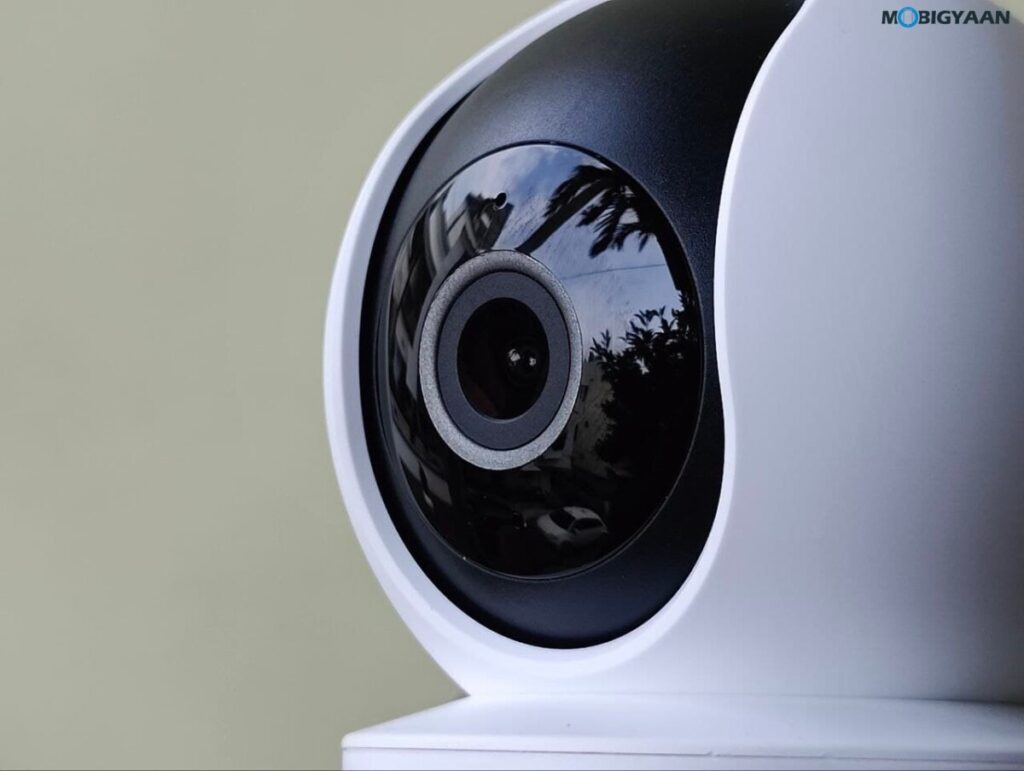 On the design front, the Xiaomi 360 Home Security Camera 1080p 2i looks similar to its older sibling, you can see its neat ball-shaped matte finished design with the camera that rotates up and down and horizontally with the base. The device is made out of a polycarbonate body and appears to be solid.

On the backside, you will find a speaker grill, a micro USB port for power input, and rubber grips at the bottom. There’s a reset button and a microSD card slot which you can access by sliding the camera lens upwards, the camera rotates horizontally at 110 degrees from its base and vertically at 108 degrees.

The Xiaomi 360 Home Security Camera 1080p 2i has a 2 MP 110-degree wide-angle lens that supports a 360-degree view. The camera equips a dual motor head that enables the camera to rotate and capture a full 360-degree horizontal view as well as a 108-degree vertical view. Features of the camera include infrared night vision, human detection, two-way real-time calls, motion-triggered video clips, sleep mode, and supports Google Assistant and Alexa.

Installing the camera is easy, the camera can be installed either upright or upside down, you will need a power connection besides the camera since it works on DC input (5V, 2A). Connect the camera to the power adapter and download the Mi Home app on your phone to set it up and use its features. The camera offers Wi-Fi 802.11b/g/n 2.4 GHz connectivity and no 5 GHz, so you have to shift to a 2.4 GHz Wi-Fi network if you want to use the Xiaomi 360 camera.

You can view the live footage of your home on the mobile phone using the Mi Home app as well as on the desktop using the Xiaomi Camera Viewer for the desktop which you can download from Xiaomi’s website. The live streaming footage of the camera can be viewed with up to 4 screens at a time. The audio output is one screen at a time, which means only when a single-camera screen view is On and not on multiple screens. For viewing on TV, you can access the Mi Home app from the User Centre in PatchWall and control the camera through a TV remote too (specific to MiTVs & Xiaomi TVs).

The camera stores the footage in a microSD card of up to 32 GB which you need to separately insert. You do get more options to save your home surveillance, you can use the NAS (Network Attached Storage) storage as well as upload to the cloud in case you want to keep a backup. The camera records 1080p videos in H.265 codec. motion-triggered video clips are also recorded, the camera can be motion triggered every 3 minutes to 30 minutes depending on the settings you choose.

The camera has invisible 940 nm infrared LEDs for enhanced night vision and clear night-time images, the image sensor displays the video in color in low light conditions for detailed view. The camera has certain optimizations, you get an AI human detection feature that effectively filters out false alarms and improves accuracy.

You can use the calling function on the camera and communicate in the room via the two-way real-time calls feature. This feature allows you to make two-way voice calls in real-time which gives you the comfort to speak to people from wherever you like. The camera also supports popular voice assistants, Google Assistant and Amazon Alexa so you can control the camera via voice commands.

The camera can be controlled remotely via the Xiaomi camera viewer app as well as the Mi Home app. With this camera, take videos, and snapshots, check on historical recordings, set the preferred recording time, and get notified when there’s an activity in the room, you can’t get any better when you have all these features, you have full control over your room.

The security camera is available at a price of ₹2,999 as an introductory offer while the regular price is ₹3,199. For those who are looking for a security camera in this range with such features, the Xiaomi 360 Home Security Camera 1080p 2i can be a great choice, we would like to recommend it.