XOLO is one mobile company which lately knows how to bring out some interesting devices to the market and to target the right audience out there and in one such move, the company recently launched the XOLO Play T1000 which arrives with a powerful quad-core NVIDIA Tegra 3 processor which makes the Play a gaming smartphone. We recently got the smartphone for the review and have summed up our thoughts in this article. Before we go into the detailed review, let us just take a look at the specifications that the XOLO Play packs in and they are as follows: To start with, the XOLO Play packs in a decent 4.7 inch IPS LCD display which arrives with a One-Glass-Solution which results in better viewing angle and together with the resolution pegged at 1280 x 720 pixels, crisp results and reading capability.But it surely a fingerprint and smudge magnet which might be an issue with a few of you. One thing which we really liked was the sunlight readbility which is better than other phones out there so for people who are mostly out in the open will not find it tough to use the phone. The touch is smooth and resposive and you will never find it hard to use the smartphone.

Going by the design, there is nothing new which XOLO has opted in for the Play T1000 and the smartphone has a design similar to the XOLO Q700 which we reviewed recently. The edged are rounded and the front face is dominated by the display measuring at 4.7 inches. On the top of the display, we have the earpiece, the front facing camera and the proximity sensor. While, below the display we have the three capacitive touch buttons. On the back, we can find the 8 MP autofocus camera with LED Flash with the XOLO branding just beneath it while the speaker is place at the botton left with the NVIDIA Tegra 3 branding above it. The back panel is smooth and rubbery which allows users to have a great grip of the XOLO Play. 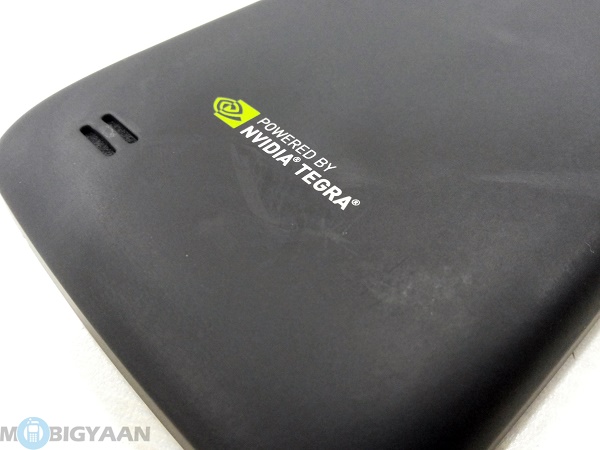 On the top of the device, we have the microUSB port and the 3.5mm audio jack. On the right of the XOLO Play, we have the Power/Lock button and the Volume rockers whereas the left side of the smartphone is without any buttons. Overall the built quality and feel of the XOLO Play is nice and it never feels cheap. XOLO has included the Android 4.1.1 Jelly Bean OS on the Play which is manageable and the company has included a number of custom apps which include XOLO Care, XOLO Secure, XOLO Power and others for users to make use of. The UI is almost similar to the stock Android OS as XOLO has decided not to make many changes to it which is good in one sense. Users will also find the TegraZone app on the XOLO Play which will allow them to download Tegra 3 optimized games for their smartphone and have great fun playing them on the quad-core device. But we also found that a number of games where not available for the Indian region which is not-so-good-news for gamers. The internal memory is pegged at 4 GB of which only about 2 GB is available for users and given that the Tegra optimized games weigh a lot, users will find it necessary to use a microSD card. The XOLO Play runs on a 1.5 GHz quad-core NVIDIA Tegra 3 processor along with 1 GB of RAM which goes on to promise users a great gaming experience. While we found the smartphone to perform decently while a number of games, both Tegra 3 optimized and non-optimized, there were a few lags here and there which you do not expect in a gaming smartphone but are also manageable and also decent given the price tag that the smartphone arrives with. The overall perfomance of the smartphone on the quad-core processor is good but a few lags in the UI were observed by us. We hope XOLO rectifies them with an OTA update. The camera on the XOLO Play arrives with a resolution of 8 MP with LED Flash a⁬nd takes some resonable images. While in day-light, the images taken turn out ot be good, low light performance suffers with noise appearing on the images taken. The camera lacks HDR mode which I personally feel is a must in any smartphone today. Macro images tuned out to be quaite good but the auto-focussing was something we didn’t get fond of. The front facing camera is of 2 MP resolution and decent enough for users to have video chats. Coming to the part of connectivity, the XOLO Play packs in 2G, 3G up to 21 Mbps, Wi-Fi, Wi-Fi hotspot, Bluetooth 3.0, microUSB 2.0 and a 3.5mm audio jack which are the basics and all that we need in today’s world.

The XOLO Play is powered by a 2000 mAh battery which gave us a decent backup of about 7 hours on full usage which included good number of calls, texts, music playback and social networking on 2G network. Once you switch to the 3G network, the smartphone heats up faster and the battery backup stays for about 5 hours. When we take into consideration the gaming time too, the 2000 mAh battery lasted only for a couple of hours for us along with the regular usage. XOLO has included a special CPU Governor into its XOLO Power app which has three different modes to namely Power Saver, Balanced and Performance priority mode to optimize the battery with the CPU usage as you can see above.

The smartphone heats up and the battery temperature even reached to 51 degrees a few times which is because of the Tegra 3 processor but leaving that aside, the XOLO Play has a decent battery live but do not forget to carry your charger with you all the time.

XOLO has priced the XOLO Play at around Rs.15,000 which is decent asking rate for the device but when you consider the little performance lags and the battery life, the XOLO Play might not be something you might want to buy. But if you are someone who is looking in for a gaming smartphone more than for the usual daily use, the XOLO Play with the NVIDIA Tegra 3 SoC is a nice buy.

Nokia Lumia 2520 aka Sirius tablet to be released in October