Mukesh Ambani led Reliance Jio first took the Indian telecom sector by storm with its aggressively priced 4G plans, and then later in July, the company surprised everyone with the launch of JioPhone – it’s first 4G VoLTE enabled feature phone. Since then, we have been hearing about other telcos also planning to launch their 4G phones. Late last month, we heard about Airtel launching its 4G smartphone in India for under ₹2000, and now today, the company has announced its partnership with Indian smartphone brand Karbonn to bring you the Karbonn A40 Indian – an affordable 4G smartphone. 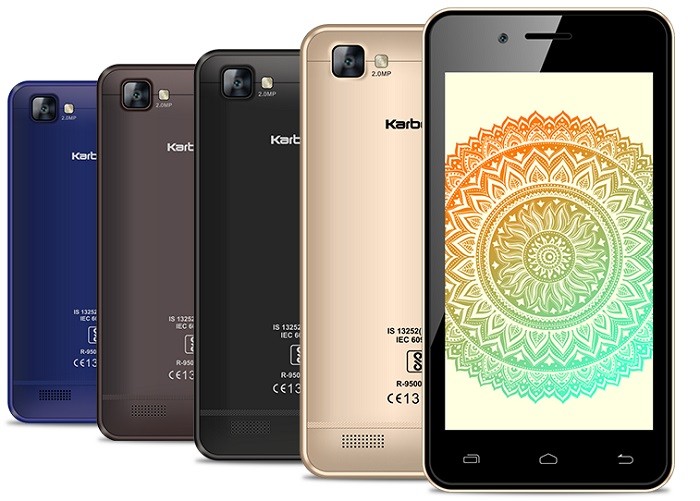 Needless to say, Airtel has teamed up with Karbonn to launch Karbonn A40 Indian 4G smartphone to counter the JioPhone. However, it’s worth noting that while the JioPhone is a 4G feature phone, the A40 Indian is a 4G smartphone. Yes, that means it comes with a full-fledged touchscreen. 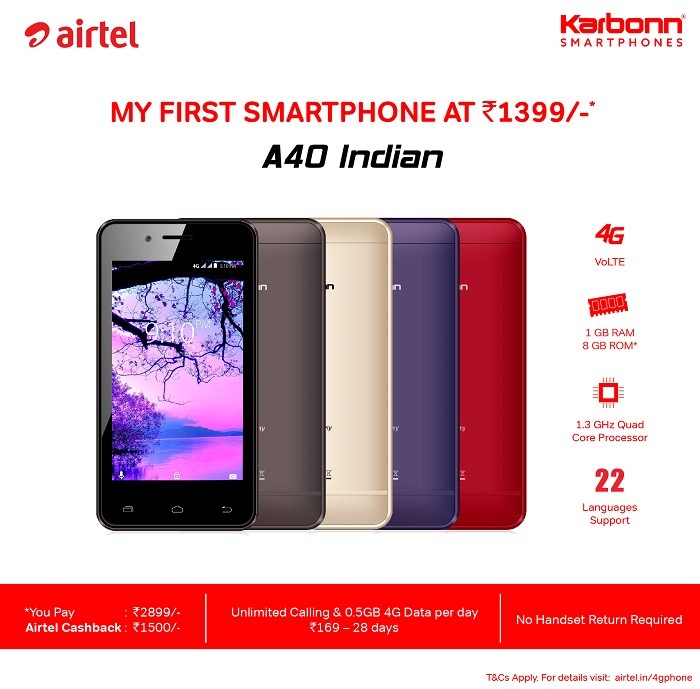 The Karbonn A40 Indian has a market price of ₹3499, however, with Airtel’s bundled offers, it’s effective price turns becomes ₹1399. It comes with a 4-inch display and is powered by a 1.3 GHz quad-core processor that’s paired with 1 GB RAM.

The Karbonn A40 Indian runs Android 7.0 Nougat which means you have access to all the apps that are available on the Google Play Store including YouTube, Facebook, and most importantly, WhatsApp. The A40 Indian has 8 GB of on-board storage with the external storage expandable up to 32 GB via microSD card.

Moreover, the Karbonn A40 Indian also comes with a 2 MP camera at the back and a 0.3 MP camera on the front. Besides, it also comes with Dual SIM slots inside which you can put SIM card of any network operator you wish to, unlike JioPhone which is locked to Jio’s network.

The Karbonn A40 Indian also supports VoLTE, and, comes with features like Bluetooth, Wi-Fi and GPS. It ships with a 1400 mAh battery which Karbonn claims can offer standby time of 200 hours and talk-time of up to 4 hours.

Like we already said, the Karbonn A40 Indian is effectively priced at ₹1399, however, you do get a total cashback of ₹1500 after 36 months without having to return your device. But, you have to do recharges worth ₹3000 within the first 18 months to get cashback of ₹500, and then recharges worth ₹3000 again within the next 18 months to get the remaining ₹1000.

Alternately, customers can also do a recharge of ₹169 per month continuously for 36 months to get a total cashback of ₹1500 after 36 months. For ₹169, customers will get unlimited voice calls and 0.5 GB 4G data per day for 28 days.

Airtel has announced its partnership with Karbonn under its ‘Mera Pehla 4G Smartphone’ initiative which is aimed at enabling more Indians to buy a 4G smartphone. Airtel has also said that it will be having partnerships with more manufacturers in the future to bring affordable 4G smartphones to the people.

“As the market leader and pioneer of 4G services in India, Airtel’s aspiration is to digitally empower every Indian with high speed data access. We are delighted to partner with Karbonn to remove barriers to smartphone adoption and enable millions of Indians to leapfrog to a full touchscreen smartphone experience. We plan to partner with multiple manufacturers to bring affordable smartphone options to the market and build an ‘open ecosystem’ of low cost devices. This is yet another step in our ongoing journey to deeply understand customers and bring innovation that delights them.” said Raj Pudipeddi, Director – Consumer Business & CMO, Bharti Airtel.

Karbonn A40 Indian Price and Availability

How to enable Notification Dots in Android 8.0 Oreo [Guide]