The Nokia Lumia 730 is a successor to last year’s Lumia 720. It is widely termed as the Lumia Selfie phone because it has a powerful 5 MP front facing camera to cater to the interest of the selfie lovers. The 730 is a dual SIM version while its sibling 735 is a Single SIM device with support for LTE and wireless charging. If you consider the pricing, the Lumia 730 falls in the budget phones category. Let us look at this mobile and at the end of this article hopefully I would have helped you to decide on a purchase.

Design
After I took the mobile out of the box, I was trying to figure out an opening or some groove to remove the back to insert the SIM cards. But initially I could’t find any and after a while I figured out that the back panel is actually a shell that envelops the sides and a bit of front holding the display very snugly. It has to be propped open to reveal the battery and the SIM card slots. Once again I was in awe for Nokia’s design innovation. The device is solidly built and it feels ergonomically just right in your hands. The 4.7 inch display has a thin aspect ratio. The device is 8.7mm thick on papers, but in reality it doesnt feel thick. I had the mint green review unit and it has a matte finish and it was resistant to dust and fingerprint. It is also available in orange, black and white. The power and volume button on the right are neatly placed but the shutter key is missing. This being a selfie camera, the dedicated shutter key would have been a blessing. The headphone jack os on the top, micro USB port on the bottom. 6.7MP camera with single led flash and mic at the back. Speaker grills at the back and the sound quality is decent enough. It is loud and there is no rattling or tinny noise from the speakers. The front you have the 5MP wide angle lens for selfies. The navigation keys are on-screen unlike the older Lumia device which had off-screen keys. Overall it is a Nokia signature design and screams Lumia all around. Under the Hood
The outer shell is swappable and removing it reveals at 2220 mAh battery, Dual SIM card slots and a micro SD card slot. Given that the device has only 8GB of internal memory, a micro SD card is a necessity. Also now Windows 8.1 allows migration and installation of apps on SD cards. It is powered by a quad-core 1.2GHz Snapdragon 400 processor and has 1GB of RAM. Display
THe Lumia 730 has a pleasant 4.7-inch AMOLED screen capable of 1,280 x 720 pixels resolutions. The AMOLED with the Clear Black display coating, makes it a brilliant and vibrant display. The black levels are immersive and there is no over-saturation and yet the colors pop out. 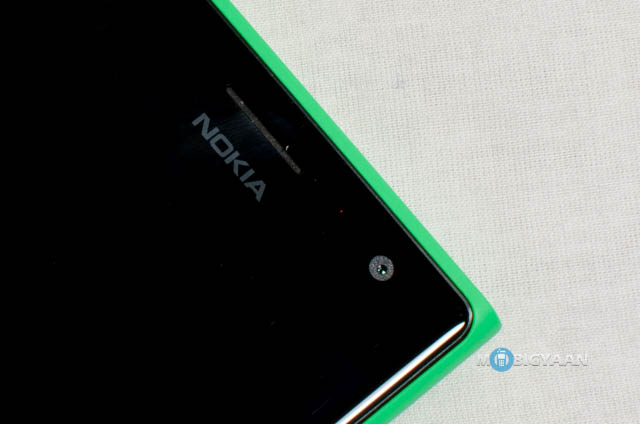 Camera
Nokia is known for its design and camera and this mobile is marketed as a selfie camera specialist. The front facing 5MP camera has wide angle lens with a large aperture (f/2.4). It is complimented by the Lumia Selfie app which has a few tricks up the sleeve. The regular Lumia Camera can also be used for front camera. It clicks really bright and natural self portrait shots under well lit conditions. When the lighting is challenged, the image is prone to blurring and noise. Also it lacks depth of focus, which means the background blurring does not happen. But considering the price band of this mobile, these short comings can be blurred out. The primary camera is a 6.7 MP sensor with a f/1.9 aperture. It has a single LED flash. The quality of the photos is decent. The images are sharp and lively under well lit conditions. The saturation and contrast is also optimal. I would seriously recommend to use the Lumia Camera app professionally. Apart from the usual auto mode, if the manual settings are utilized, you really get some amazing pictures out of this mobile. Both the front and the rear cameras are capable of recording 1080p videos. While the quality of video output is pretty much standard, it is the audio quality that surprises me every time I use a Lumia. Nokia has implemented it rich recording algorithm to cancel noise and record stunning audio.

Check out the sample photos Performance
The Lumia 730 is a not a beast in the performance arena. But it is sold at a price point where you cannot complain about a few frame drops occasionally. First installing a 3D intensive game on the device with a 8GB of internal memory is a challenge. Once you have installed the memory card and moved the apps to the memory card, you can start experiment with intensive games. There were a few frame drops and stuttering while playing asphalt 8. But games like Temple Run, Subway surfer or Wings of Fire were smooth. The sound quality was also decent. The browser performance is really amazing. It scrolls fast and the pinch to zoom action is very fluid. Keeping in mind that this is not a flagship device, we can definitely say that this mobile passes with aces when it comes to performance under constrained hardware specifications. Battery
Lumia 730 is powered by a 2200 mAh user replaceable battery. Under normal usage conditions, the device managed to last for more than 18 hours. When I say normal usage, it would involve 3G network always on and used for occasional internet browsing. The facebook and twitter feeds are on and a few clicks along with a few minutes of talk time. Software
The Lumia 730 has the latest Windows Phone 8.1 with Denim update. The update has new and improved notifications, Live tiles with Folders, swipe based keypad and App corner.

Verdict
The Lumia 730 is a well designed and stylish budget smartphone. It is an added benefit that it takes good self portraits. The mobile particularly aces in the ergonomics and design department. It is also a decent performer with an affordable price tag. The camera performance is also decent except under low light conditions. Also the internal memory capacity could have been a bit generous. The Lumia 730 is comfortably priced at Rs 14000 and this is a price band that a lot of mobile manufacturers are trying to eat their way into. Moto G is a head on competitor for the Lumia 730 at this price range. The recently launched Lumia 535 is another good contender, but if you are not a fan of big mobiles and need a mobile that fits in your pocket, size and bank balance, the Lumia 730 is the one.