Gionee, a Chinese smartphone manufacturer is the newest entrant in the Indian mobile phone market and has launched a variety of devices lately but most recently, the company announced the launch of the Gionee Elife E6 smartphone which packs some great specifications, hardware, design and more for a decent price tag of Rs. But is this phone worth buying and does it really force you to pick up in comparison to other OEMs, especially Samsung, read on to know. 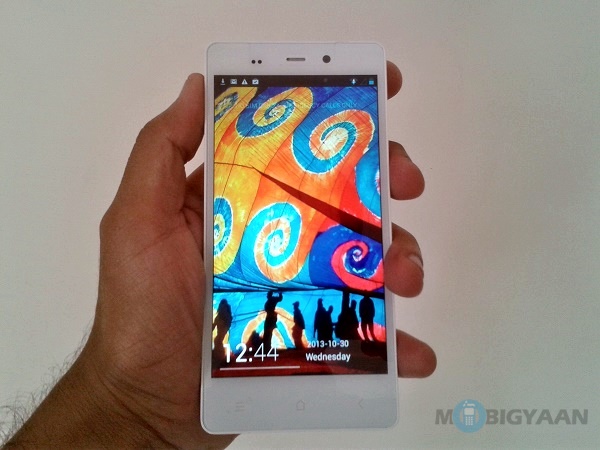 The Gionee Elife E6 arrives with :

The Gionee Elife E6 is, as the company says, first white smartphone with OGS (One Glass Solution) display and the hardware quality is great. The smartphone carries a unibody form factor and is built with high quality polycarbonate which never feels cheap. The design of the Gionee Elife E6 is a bit resembelent to the iPhone but is still impressive and will surely make heads turn. On the front we have the 5 inch full HD (1920 x 1080 pixels) IPS display which is stunning and one of the best I have played along with. Above the display you will find the sensors, speaker grill and the 5 MP front facing camera. And next to it there is the LED notification light which will light up when the phone is in charge, battery is low and when you have a notification. On the bottom of the screen you will find the three capacitive Android buttons. The microUSB port and the speaker grills are also placed in the same fashion as found on the iPhone 5 and above. On the right of the Gionee E6 is the volume rocker which has a chrome finish while on the left, the company has placed the microSIM slot which can be opened using the PIN provided in the box. On the top is the 3.5mm audio jack and the Power/Lock/Unlock button which will be a bit difficult to get used to but after a couple of days, you will get habitual of it and feel that it is rightly placed. On the back, you will find the 13 MP Autofocus camera with BSI sensor and the LED Flash while a second microphone for noise cancellation can also be found besides it.

The Gionee Elife E6 weighs just 125 grams and feels ultra light thanks to the design and the polycarbonate material while measuring just 8mm thick. Overall, the hardware is brilliant and it seems like no other device in the market in this price range can beat the E6 anytime soon. The Gionee Elife E6 packs in a full HD IPS display which gives a stunning pixel density of 441 PPI. As mentioned earlier, this is one of the best displays I have personally used in a long time and from the very first moment you will fall for it. The brightness is great and the visibility in sunlight is decent enough. Thanks to the IPS panel and the One Glass Solution (OGS) the viewing angel and color reproduction is better. We would give Gionee a thumbs-up for packing in a great display in the Elife E6. Now leaving the display behind and coming to the Software front, here is where the company put in a lot of effort. The Gionee Elife E6 runs on Android 4.2.2 Jelly Bean OS which has been forked by the company and is called ‘Amigo’ which is great to use as it is a nice change from Samsung’s TouchWiz or the stock Android on the Nexuses. To unlock the screen, you will have to slide the clock from the bottom of the screen to the top, just like on the HTC Sense 5 wherein you swipe the Lock from the bottom on the screen. The lock screen is clean and swiping left will provide you quick access to the camera and you can click photos, record video or use the LED Flash as a torchlight. Once the device is unlocked, you will find the homescreen which also doubles up as the Menu. Gionee has also included Smart Gestures like on the Samsung Galaxy smartphones and they worked well for us most of the times. The company has also included Themes, which contacts a variety of Theme Skins to let users customize their home screen. The Gionee Elife E6 arrives with a 1.5 GHz quad-core MediaTek processor with PowerVR Series5XT GPU and 2 GB of RAM, which basically should have provided a great performance but the heavy graphics and animations coupled with the full HD display take a toll on the performance. The transition from one homescreen to another or opening an app is laggy a few times. Gameplay on the device is good enough and we didn’t face any issues racing our car.

Multitalking is smooth as butter and opening multiple applications and also keeping them running in the background will never be an issue though it could take a toll on the battery. The Gionee Elife E6 has a 13 MP camera with LED Flash with BSI Sensor stacked on its rear which takes some nice images in low light but there are times when images are washed out but we were really impressed with the Macro shots that the camera captured. The images look brilliant on the full HD Display. I personally felt that the Flash, which has been set at the edge of the device makes a few images to be be flooded with light as it is wrongly placed.

Coming to the 5 MP front camera with wide-angle lens, you will be very much pleased by its performance as it will help you to take some nice ‘Selfies’ or have video chats with friends and family. Catch the camera samples below. The Gionee Elife E6 provides 2G, 3G, Bluetooth 4.0 with A2DP, Wi-Fi-802.11 b/g/n, Wi-Fi hotspot, WLAN Direct, microUSB connectivity with options like Gionee Xender to transfer data between devices and Wireless input device (Keyboard & Mouse) to the users. The smartphone is powered by a powerful 2000 mAh battery which is non-removable and will go on to give users a decent battery backup of a full day’s usage which includes nice number of calls, texts, about 3-4 hours of internet usage over Wi-Fi while hardcore usage on 3G provided us about 5 hours of backup which is great given that we always used the device on full brightness.

The Gionee Elife E6 is a brilliant device going by the hardware and the specifications that the smartphone packs in for Rs.22,000 and is sure to beat all the devices in this price range of other mobile manufacturers and is a value for money smartphone if you are not a brand-conscious person.