Apple announces iOS 15 — Everything you need to know

At Apple’s developer conference (WWDC 2021), the company has unveiled the updated version of its mobile operating system — iOS 15. It comes with a number of new features for FaceTime, Messages, Photos, and more. 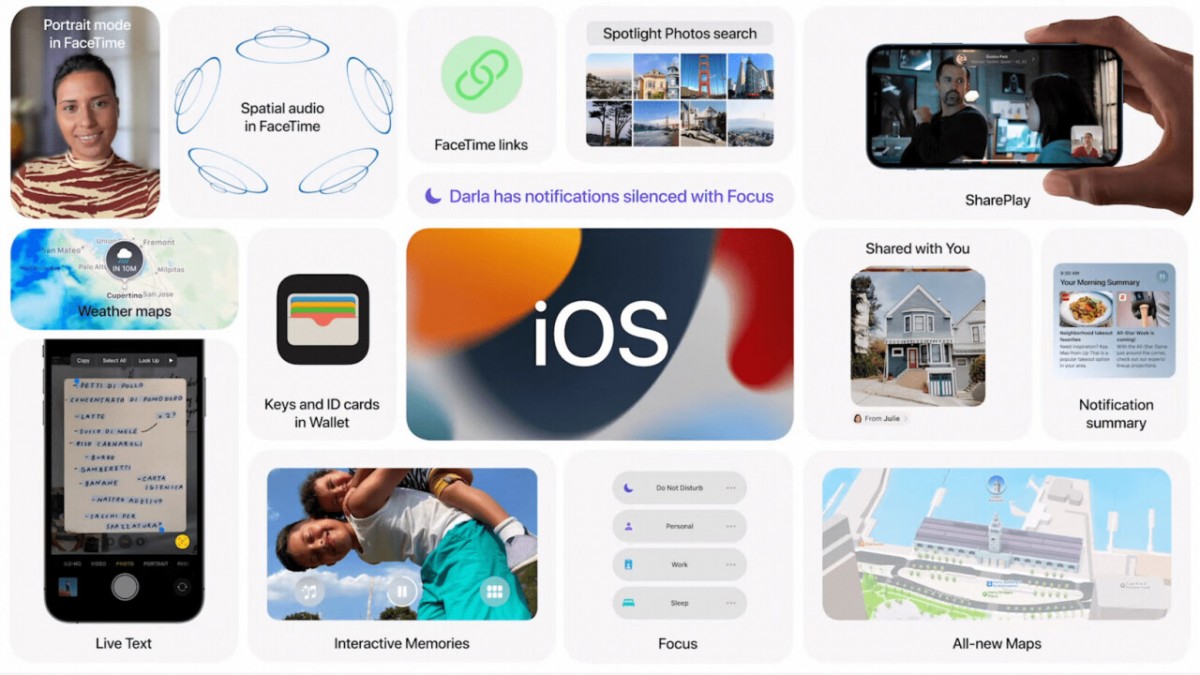 Here is everything that Apple is bringing with the latest version of iOS to iPhones.

One of the biggest improvements coming with the iOS 15 is in the FaceTime application. The company has made it more natural for the users, adding the Spatial Audio feature to the platform.

The Spatial Audio feature ensures that the sound is spread out to mimic where the speaker is and gives a surround sound experience to the listeners. There’s also a new Voice Isolation feature that offers clear audio from the person in a video call. Apple has added a new Grid View showing every attendee in a large size tile format. There’s also support for Portrait Mode on FaceTime to make attendees stand out from their backgrounds.

The new SharePlay feature enables a shared media consumption experience on FaceTime where users can listen to music, watch movies or videos, or share the device’s screen with the users on the call.

Also, FaceTime is no longer limited to Apple users. It now allows users to share links and invited users can join in, even if they use a PC or Android device.

The company has added a new design element for showing multiple images in the message thread. It can now show multiple photos in a chat in a collage design. There’s also a new Shared Stack that brings content shared with the user from Messages to the News app as well as the Photos app.

This feature is designed as an enhanced version of Do Not Disturb and offers a more personalized experience as per the user’s schedule. Enabling the Do Not Disturb mode will now let others know the user’s status through the Messages app. Others can bypass the DND and ping users in case of an important interaction. There’s a new Notification Summary feature that uses on-device intelligence based on usage patterns to summarise notifications. Users can also choose to see notifications from certain apps at a specific time. These changes will take effect across the home screen, notification preferences, across devices.

One of the major features coming with the iOS 15 is Live Text for the Photos. The feature will enable users to pick out text seen in images which can then be copied and used as a text in other apps. Additionally, Photos will now appear in Spotlight search and will let users search for text within these images. The Photos Memories has been upgraded to create on-tap videos using music. Users can also tap and hold these memories for pausing photos, while the music continues to play.

The Wallet app from Apple already supports credit cards, loyalty cards, and theme park passes and now the company has added support for car keys for select vehicles along with hotel room keys for over 1,000 Hyatt properties globally. Apple has also added support for Identity Cards (ID cards) to Wallet. In the United States, users in some states scan the driver’s license into the app and the scanned data is securely encrypted and stored in the secure element. Apple added that it is also working with the TSA to use Wallet IDs in airports.

The Cupertino-based tech giant has added a new global view to Maps in which users can zoom into cities to see more details, including new custom-designed landmarks. However, it is just a drawing of the area and not a photo-realistic rendering but includes elements like crosswalks, road lanes, trees, and overlapping highways. A night-time mode has also been introduced with the moonlight effect. In Navigations, users can pin favorite transit routes to the top of results. It has also added an AR-based feature in select cities like London, San Francisco, and New York City that lets users point iPhones at buildings to figure out the next turn.

Apple usually launches the new version of iOS along with the new iPhone, typically in the month of September. We expect the new iOS 15 to drop in September of this year. The public beta version of the software should be available by the end of this month.

How to search Open Tabs in Mozilla Firefox on your computer