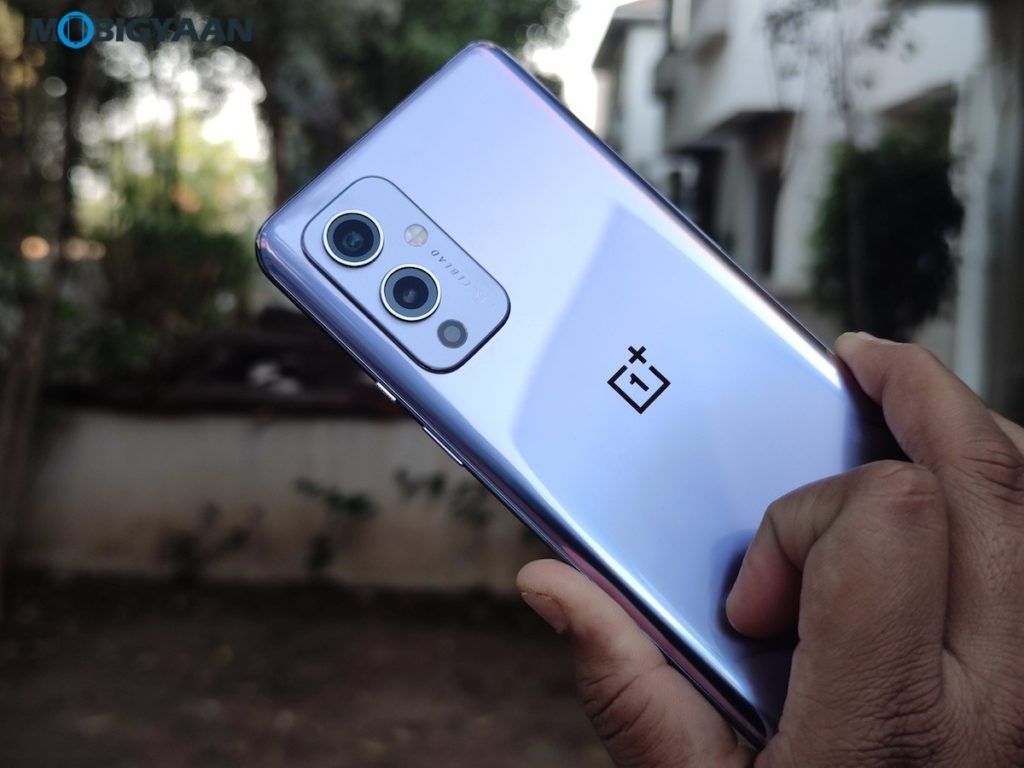 The back flaunts a new Hasselblad camera setup with a renowned OnePlus logo, the design on the back is pretty much sleek and minimalistic. There’s a lot packed on the upper left corner, while the rest is everything glass. The OnePlus 9 impresses with a gorgeous, eye-catching design, this company knows how to make devices that amaze you when you see them in person.

It uses a punch-hole design and looks way too similar to the OnePlus 9 Pro, the only thing we miss is the curved display on the OnePlus device in terms of design. The fingerprint scanner is under the display and the phone has an IP68 design meaning it is water and dust resistant.

Speaking of the display, the OnePlus 9 5G has now a 120 Hz Fluid AMOLED display sized at 6.55-inch providing a resolution of Full HD+, the brightness peaks at 1,100 nits. The OnePlus 9 5G’s display looks fantastic, it’s bright with rich colors, deep blacks, and has a smart 120Hz adaptive refresh rate.

Moving on to the sides, the bottom side has a USB Type-C port, loudspeakers, a microphone, and a dual SIM tray that supports two 5G SIM cards on dual standby, not dedicated microSD card slot is available.

Whereas the top side has another microphone, no 3.5 mm audio jack is found and you are left with either the Type-C earphones or the OTG converter for the 3.5 mm jack. There’s a power button on the right and the alert slider to silent the phone while you get volume keys on the left side.

The buttons feel friendly and give nice feedback. You also have stereo speakers on the phone for a great audio experience. Stock Android and Oxygen OS fans, the OnePlus has upgraded the OxygenOS to the new version, the Oneplus 9 comes with OxygenOS 11.2 based on the Android 11 out-of-the-box with a security patch is dated 1st February 2021. OnePlus once built its name for offering a stockish Android experience with OxygenOS. It’s like a stock Android with added features and enhanced user interface, gestures support, some customizations and theming stuff, and other tweaks. No bloatware is found, you get all the necessary apps from Google and OnePlus, no third-party apps aside from the Netflix app that you can’t remove.

The performance of the interface is super-fast, super-smooth, and fluidic, the 120 Hz really plays a vital role here, the user interface feels light, snappy, and responsive.

The OxygenOS 11 has features from Dark Mode, Always-On Display, to Work-Life Balance, Scout, Zen Mode & Group Zen, Fnatic Mode, and more in addition to the default features that you find in the OxygenOS as well as the native Android 11 traits. You also get new live wallpapers (with changing according to the day and night), themes, clock styles, a new gallery function that creates weekly stories, and a new layout different from the previous version. It’s not new to us that OnePlus chooses the best-in-class chip when it comes to performance, the OnePlus 9 5G uses the same flagship chip found on the OnePlus 9 Pro. Built on a 5nm process, the Qualcomm Snapdragon 888 SoC is the fastest mobile processor in the world and the OnePlus 9 has it. Specifications include the notable 2.84 GHz Snapdragon 888 SoC packed with a massive 12 GB LPDDR5 RAM, Adreno 660 GPU, and 256 GB UFS 3.1 storage. Our benchmark test results show that the CPU tops out in every section, the single processing, multiprocessing, as well as GPU and compute power. In addition to that, the storage performance is jaw-dropping with almost 2.0 GB/s read speed and 700+ MB/s write speed in the sequential storage benchmarks and it’s closer (or even better) to the SSD class performance if you compare it with the desktops. You’ve got a powerhouse if you are choosing the OnePlus 9 for its performance.

There’s nothing better than a GPU with this much power, the Adreno 660 is no wonder the fastest mobile gaming GPU on Androids, you will love the gaming performance out of it, the GPU is able to run everything you throw at maximum pace, it’s highly capable of playing the most advanced games currently build for Android, take note. OnePlus 9 5G has triple cameras on the rear side and this is the most advanced camera tech OnePlus smartphone has ever made available on its smartphones followed by the OnePlus 9 Pro. It’s not the new triple cameras that give a glimpse of the phone’s camera capability, it’s also the new Hasselblad collaboration that enhances the overall image quality. Speaking of the video capabilities, the Hasselblad camera for mobile offers improved HDR video recording as well as support for capturing 4K video at 120 fps and 8K video at 30 fps, which is far better than current flagships in the market. The slow-motion comes at 240 fps and 480 fps on 1080p and 720p resolutions respectively.

Take a look at below image samples that we took from the OnePlus 9 5G’s Hasselblad cameras. The quality looks quite amazing, even the wide-angle and macro shots are far better in its segment. Also, low-light shots appear to be good, the OnePlus 9 is a marked improvement over past OnePlus phones in terms of photography.

OnePlus has put a huge effort into improving its mobile photography. The partnership with Hasselblad is evidence of this. Both companies have been focusing initially on producing natural color tones. The has various camera improvements which include advanced color calibration known to be the Natural Color Calibration with Hasselblad that brings more perceptually accurate and natural-looking colors to photos taken with the OnePlus 9 camera.

Hasselblad, founded in 1941, is among the leading manufacturers of digital medium format cameras and lenses. The OnePlus X Hasselblad partnership will continuously develop over the next three years starting with software improvements including color tuning and sensor calibration and then extending to more dimensions in the future. It also will serve as OnePlus’ new standard for color calibration for its future smartphone cameras. OnePlus also promised to invest $150 million (₹1,094 crores approx.) on camera development over the next three years.

On the battery side, the OnePlus 9 5G comes with a 4,500 mAh battery with the new 65W Warp Charger providing one of the fastest charging support. The competition could be offering larger battery capacity, however, the higher the battery, the bulkier the phone design comes with. The battery backup is pretty good and it takes a whole lot of less time to charge the phone. You can expect a battery life of about 1.5 days to 2 days depending on the usage, in our case average.

There’s nothing better than having a phone with the fastest charging tech, the OnePlus has proved that it’s not an ordinary phone when it comes to the charging speed, all it takes is 29 minutes to charge from 0% to 100% and lasts a full day in just 15 minutes of charging.

It could be great if OnePlus offer wireless charging on the OnePlus 9, the Pro variant supports the Warp Charge 50 Wireless charging utilizing the 50W charger (each cell charging at 25W) can even outpace the wired fast chargers, it charges up to 70% in just 30 minutes and for a wireless charger, it’s too fast.

This new OnePlus 9 5G has impressed us in every department, it’s a severe contender for the Android flagships. With the new OxygenOS out-of-the-box, outstanding performance, a very capable camera, and the great 120 Hz Fluid AMOLED display, the OnePlus 9 5G has you covered, it’s a solid and competent opponent in its class.