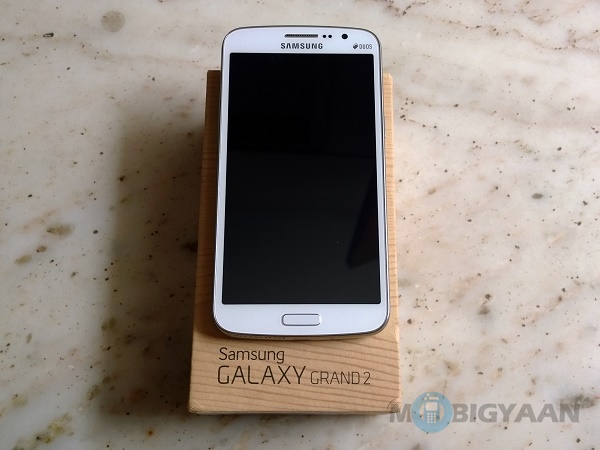 The Samsung Galaxy Grand 2 arrives with the following specifications: 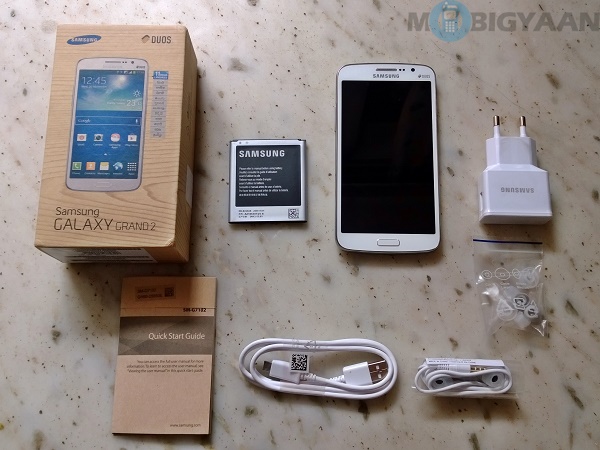 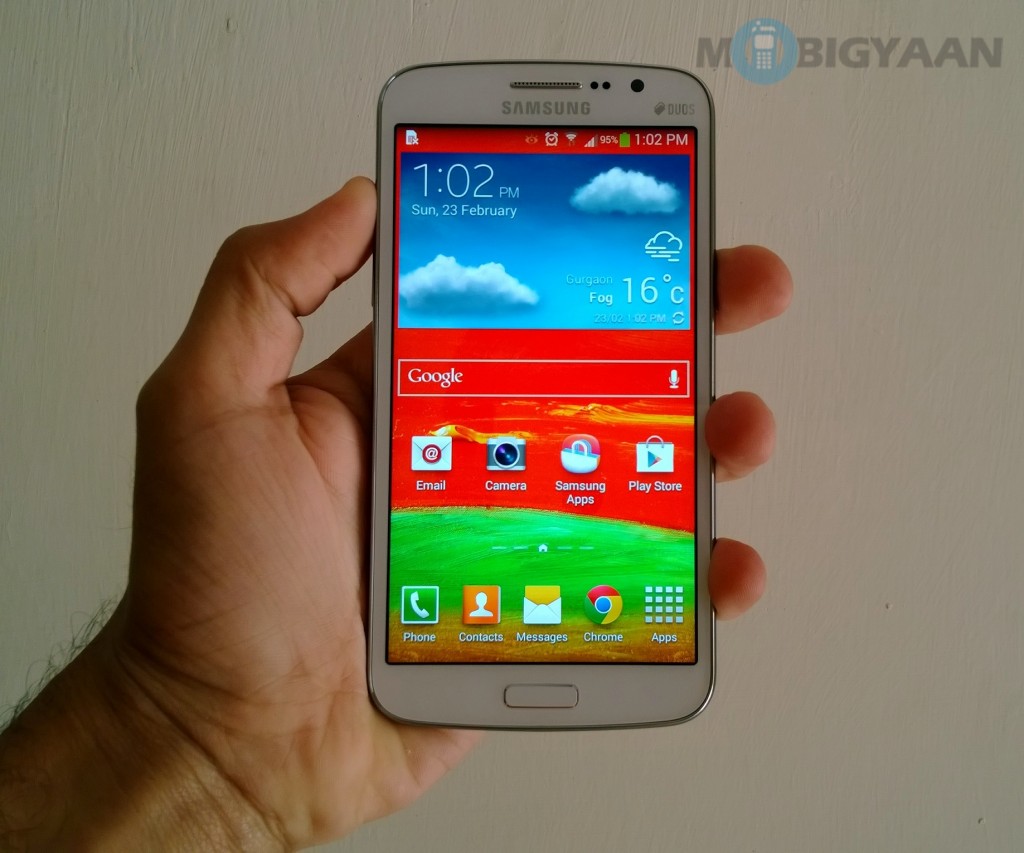 Frankly, the Samsung Galaxy Grand 2 is the first Samsung device which I am reviewing or even using on a personal front and I was not much of a fan of how ‘plasticy’ the devices from the company felt, which I used for a while by asking my friends and family to give me for a few minutes. But the Samsung Galaxy Grand 2 changed my opinion. The first thing you notice about the smartphone when you take it out of the box and hold it is, it is very built, doesn’t feel like cheap plastic and is light.

Yes, I say all of this as I have spent a few hours with the original Grand and it is bulky and not so impressive but the Samsung Galaxy Grand 2 is nice to hold with a better display and comes with a plastic back but with a faux leather finish. Overall I am happy with built quality of the smartphone but coming to the design part, well, it is something which is Samsung really has to work on as there is NO INNOVATION AT ALL from the company on this front. Even the Samsung Galaxy S5, which was announced recently has the same old boring look which you also get on an entry level Samsung Galaxy smartphone. But the Samsung Galaxy Grand 2 does look better than the original Grand.

On the front, the Samsung Galaxy Grand 2 has a 5.25 inch HD TFT touchscreen display which feels nice to use and look at as the company has put in more pixels in comparison to the Galaxy Grand. 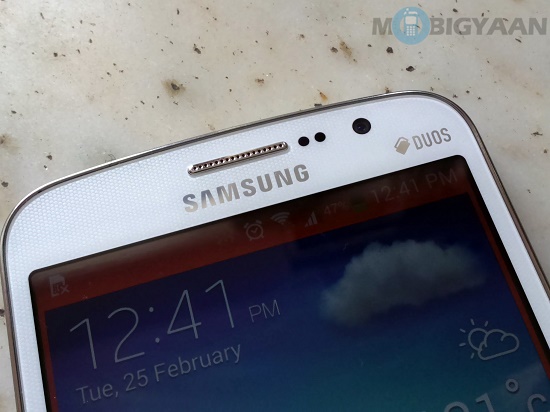 On the top of the display, we can find the speaker grill, the 1.9 MP front facing camera, the proximity sensor along with the ambient light sensor sitting just next to it. And to remind that the device is from Samsung and comes with dual-SIM options, we have the company’s and ‘Duos’ branding on the top of the display. 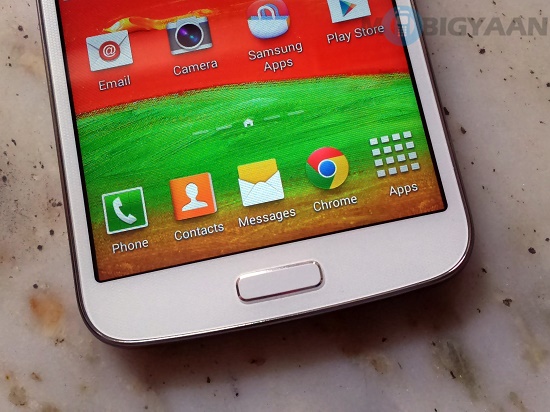 Under the display, you will find the trademark physical home button which I personally like and miss on the Nokia Lumia or other Android smartphones. On either sides we have the capacitive buttons which are hidden unless we use them. On the left of the Grand 2, you will find the Volume Rockers. The power button is situated on the right side of the device and I missed a physical camera button on the device. On the top, the 3.5mm audio jack has been placed. The microUSB port which is used for data transfer and also charging the device is placed at the bottom of the device. Coming to the back of the Grand 2, we have the 8 MP auto focus camera with LED Flash sitting on the top of the device with the loudspeaker is just next to it. 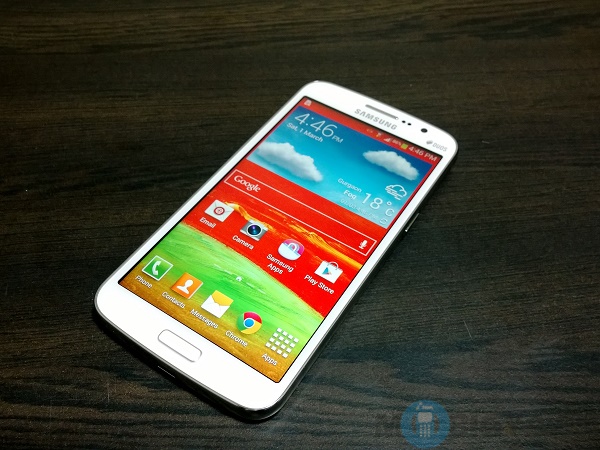 The Samsung Galaxy Grand arrived with a 5 inch display but with resolution of 800 x 480 pixels which was a let down but the Grand 2 comes with a 5.25 inch display with a HD resolution which feels good to use and the touch is responsive. The colors reproduction is decent enough but sunlight visibility could be a concern for people who are mostly outdoors. It is manageable but not top notch. One thing which I didn’t like about the display is that it is highly reflective. Overall, the display is better than the Grand but could have been better. Performance is something I never have heard was great on the Galaxy Grand but the Samsung Galaxy Grand 2 packs in a 1.2 GHz quad-core processor which is up from a dual-core one and 1.5 GB of RAM which is up from 1 GB on its predecessor and these both, do take care that the UI heavy smartphone doesn’t lag much while multitasking but then, there are there were times when even the upgraded duo couldn’t help much.

We blame all of this on Samsung’s TouchWiz UI which needs a lot of processing power to run and this in turn takes a toll on the hardware but on the Grand 2, I was not as frustrated as I had expected to be before using the smartphone. This might also be because, the device runs on Android 4.3 Jelly Bean OS and Sammy has indeed refined TouchWiz.

The Samsung Galaxy Grand 2 which we received 17007 scored points on the AnTuTu Benchmark which is better than the LG Nexus 4. Overall, it is good experience using the Grand 2. More than I was expecting.

The Grand 2 arrives with 8 GB of internal storage of which about 2.83 GB is used by the system and the rest is available for users to make use of but they can also expand it using a microSD card slot to store more data. Coming to the connectivity options, the Grand 2 comes with support for dual-SIM (GSM + GSM) and has 2G, 3G, Wi-Fi, Bluetooth, FM Radio and 3.5mm audio jack which are the regulars. We has a decent experience while using the smartphone for calls and the clarity was manageable. Cameras on smartphones have become an important deciding factor while buying a phone these days and the Samsung Galaxy Grand 2 arrives with a decent 8 MP camera with LED Flash which goes on to take nice images which are manageable while there is a 1.9 MP fornt facing camera which is capable of recording videos at 720p. The camera UI has changed a bit from that on the older version of the smartphone as the Grand 2 comes with Android 4.3 and better TouchWiz and looks as below, wherein you find a shortcut to the gallery on the Bottom Left, Settings on the Top Left with an option to shoot the front camera next to it. You can shoot video and capture images simultaneously by using the buttons on the right.

Users get various capture modes apart from the Auto mode, like Best Photo, Sound and Shot, Best Face, Rich Tone or HDR, Panorama, Night and couple more which work very well. Overall, the camera on the Galaxy Grand 2 is good for the price. Check out the sample images below. Click to enlarge them. The Galaxy Grand 2 is lucky enough to arrive with Android 4.3 Jelly Bean OS with TouchWiz UI on top of it which is much better than the Android 4.1 or even 4.2 Jelly Bean-TouchWiz combo. The device brings in new features like My Magazine which is similar to Flipboard and bring news from around the world and your social networking sites in a tiled-magazine like format for you to keep in touch with the happenings around you. This can be access by just swiping up from the bottom of the screen. The smartphone also comes with many features like Multi-Window which was introduced on the Note 3 and will let users to use apps side by side thus making it easy for users to do two different things simultaneously. Samsung has indeed worked hard in making the UI intuitive and after using TouchWiz on the Grand 2, I might just go ahead and suggest a Sammy device to someone but only if it is Android 4.3 and up. The Samsung Galaxy Grand 2 comes with a powerful 2600 mAh battery which is removable and many Samsung mobile owners whom I know have always complained about bad battery backup but on a normal usage, I was able to pull the device through a day and on standby with less usage the device worked for more than 2 days and 18 hours for me. So, Samsung has indeed worked hard on improving the backup which users get from the Grand 2 and let us all thank god for that. I really wanted to use a Galaxy branded smartphone as I wanted to know what is it that attracts so many buyers to go for a smartphone which goes on to look alike from the low-budget to the flagship, from the design point of view and with a plastic built. But then the Grand 2 for some reason stood out and I am impressed by the way Samsung has packaged it. From a better display to a good performance and a decent camera coupled with great battery life compared to the original Grand, I can’t believe that I am saying this, but the Galaxy Grand 2 is good to go for the price.

Preview for Google Glass will let you watch movie trailers by looking at posters!