Spice is one Indian company that is among the biggies in the market but always has something different on offer. Spice has repeatedly delighted us with the performance of its devices. Rather than bringing just cosmetic changes to their devices, the company has also brought out the proper hardware and software to the table, but most of all it seems that the company has actually worked on putting everything in sync so that consumers can actually use their phones up to their whole potential. 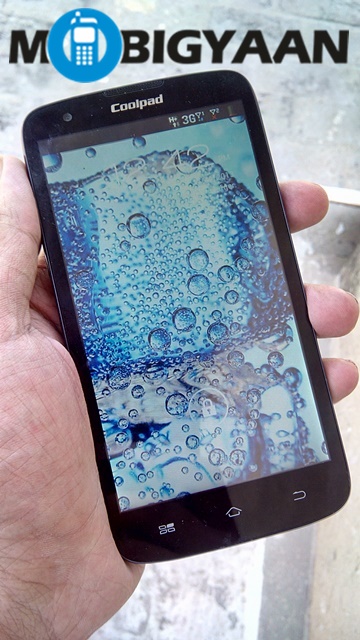 Spice has already jumped on the phablet bandwagon with phones such as the Pinnacle Pro, but the Coolpad is its attempt at attacking the popular 5-inch phablet range, which is generally assumed to be the perfect size for the up and coming consumer.

When it comes to the Spice Coolpad, the stars  of the show are its 5-inch screen, thin form factor, quad-core processor and its Rs. 9,290 price tag. But how does it end up as a package? Lets have a look. As far as the packaging is concerned, it is kept pretty simple. The handset comes in a simple and sophisticated box containing headphones, a USB charger and a data cable. Not much to talk about here except that the headphones are from a different age, they have a smaller side and a large side which has to be worn around the neck rather than in front – back to to 2001, people.

The word we have for the design is easy. It is easy to hold and easy to use, but not too stylish unless you love a glossy plasticky phone. The 140 x 73 x 9.9 mm doesn’t make you jump for it. It’s not too slim but it does have polished edges which doesn’t even make feel too thick. The front is covered by a 5-inch screen and it takes up most of the space here, which is a good thing. Above the screen, slightly towards the right, you will find a secondary camera, while below it there are 3 capacitive buttons for home, back and menu. In the design section, the blue metallic strip around the phone kind of lends it sophistication but it is actually the blue plasticky back kind of mars its buzz. The camera is located in the middle of the handset towards the top while there is a speaker around the bottom. Overall, the design could have done better with little improvements. The Spice Coolpad runs on Android 4.1.2 which is okay but you will feel the lack of features if you have ever used more advanced versions of Android. The UI doesn’t have much to say, everything is kind of run-of-the-mill except the app button in the middle, which transforms to the app button once you are inside the menu. There is a drop down menu that acts like both a shortcuts bar and notifications bar. The best part though is that everything responds pretty fast generally so, we hardly have any complaints.

The phone has the average Wi-Fi, 3G and Bluetooth connectivity but the FM radio loses signal as you move inside.

The phone doesn’t have too many multimedia features i.e. it has a video player, a music player and FM radio.

Everything works in a simple manner although  the sounds via the speaker left a lot to desire. The camera on the phones leaves a lot to be desired. The 5-megapixel camera works okay in conditions with a lot of light but when it comes to indoor and low-light shots, the camera gets crappy. The images in other than lit-up conditions are grainy, blurry or distorted.  Even outdoor shots are not too great. The camera has an HDR mode, a beauty mode and a normal mode. There is no physical camera key on the device either.

The video recorder on the device isn’t too awesome either.

The camera left us disappointed.

Performance is one section where the phone has actually done well. The quad-core 1.2 GHz processor along with 1 GB RAM works pretty fine and we never suffered any lags on the device whether it be while gaming or performing day-to-day tasks.

The 2000 mAh battery works good too and lasts a whole day of regular use while the call quality is good too.

Amongst budget smartphones available in the market, the handset is a good choice overall, since it is a great phone for day-to-day usage, since its processor, battery and screen work well. But the camera is a letdown and so are the music features so, we would call it a mix of good and bad, mostly leaning towards the good.