The concept of Android One didn’t receive much success in the past years when it started in 2014. The entry-level smartphones from Indian manufacturers with clean software wasn’t a good idea since they aren’t able to catch up with the mediocre hardware and overall quality. Things have changed, it’s not about the budget devices after all, rather a middle-class all-rounder smartphone tagged as an Android One device. Xiaomi Mi A1 is a midrange Android One device with dual cameras on the back and guarantees future Android updates.

In terms of appearance, the design is slight reminiscent of the phablet Xiaomi Mi Max 2, the built is all-metal, sleek, slim, stylish body, light in weight, matte back not prone to fingerprints, curved corners and edges, everything about the design is simply awesome. The screen sized at 5.5-inch uses a 2.5D Corning Gorilla Glass 4 with oleophobic coating.

For the front area, the phone has external touch keys that light-up on action, much useful in the night and low light conditions. The back side comes with a fingerprint scanner that works decent. It supports gestures like opening the notification panel by swiping the finger on the scanner.

The main highlight of the phone is the dual camera. The dual cameras each of 12 MP when combined captures bookeh effect photos. The rear camera offers 2X optical zoom, dual-tone LED flash and no OIS support. On the front side, the selfies are taken care by a 5 MP camera that supports Beautify mode. 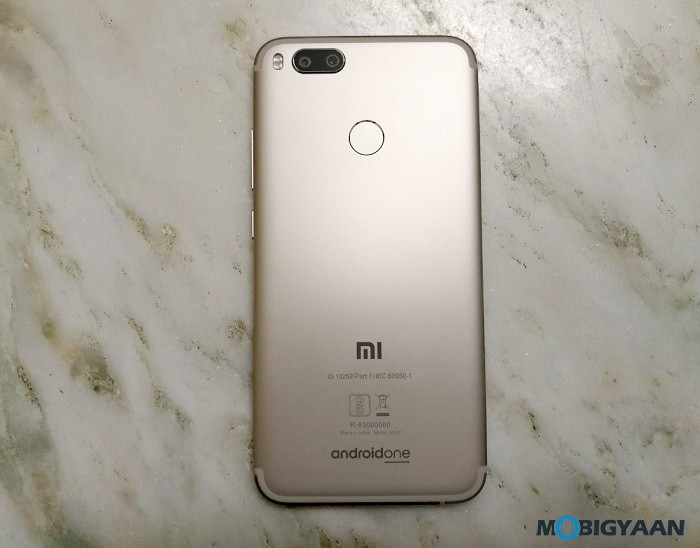 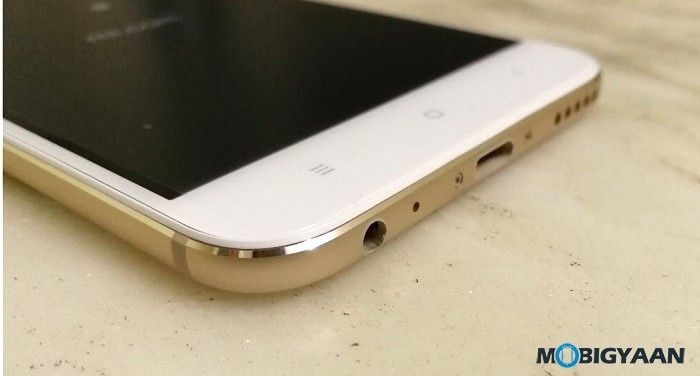 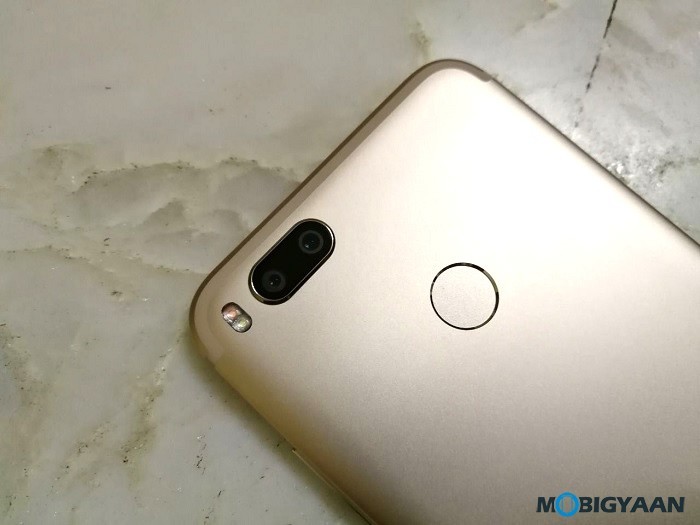 On the top side sits an IR Blaster for controlling any infrared enabled devices and a microphone. The bottom edge holds two grills out of which the right side is packed with a loudspeaker while the left one carries a microphone inside. More to it has a USB port with type-C and a 3.5mm headphone jack. The screen diagonal is 5.5-inch using full HD resolution. It is covered with a scratch-resistant Corning Gorilla Glass 4 with 2.5D curved edges. Although the screen seems promising, it’s not a high-end display that you’ll find in Mi 5 and Mi 6. The display quality is similar to a ₹9,999 Redmi Note 4 and more or less, this is good, if not great, for its pricing. The screen is reflective, sunlight visibility is adequate, that’s all Xiaomi has to offer. There is really nothing to complain in the display area, Xiaomi Mi A1 boasts a good display here. It is worth mentioning that the device will be able to pick updates quickly since it is backed up by Google itself, currently, you will get Android 7.1.2 Nougat out of the box with a guaranteed update for Android Oreo by this year and being served as the first device to get the Android P update. We also believe that, in future, the device will receive Android Q. The latest security patch available on the phone is of 1st August 2017.

If you are familiar with MIUI, then the whole experience is about to change. The software ecosystem has been changed from MIUI to the Google’s Pure Android. That means, no apps from Xiaomi, everything you see is from Google, the Photos app, Google Play app store, the Homescreen icons, the Notification bar. What’s from MIUI is the camera and the IR Blaster app due to the hardware present on the phone. No lags found in the user interface, it runs very smooth and the feeling of a stock Android is just amazing on a Xiaomi device. The fingerprint scanner is fast, not the fastest, but works like a charm. It supports swipe gestures to bring down the notification panel. On the performance note, Xiaomi Mi A1 has received a midrange hardware that won’t let you down. The Mi A1 packs a Qualcomm Snapdragon 625 SoC with 4 GB LPDDR3 RAM and 64 GB eMMC internal storage. The SoC is been used in many smartphones including in its own popular Redmi lineup – Redmi Note 4. That’s enough for a smartphone that’s priced at ₹14,999.

The Snapdragon 625 uses 8 Cortex-A53 cores clocked at maximum 2.0 GHz along with a 650 MHz graphics processing unit. The performance is similar to Redmi Note 4, and Mi Max 2. The benchmarks include AnTuTu with 60,527 points, Geekbench with 866 points (single-core CPU), 4,216 points (multi-core CPU), and GPU with 3,217 points. The Quadrant Standard Edition scored 25,158 points. The benchmark states the CPU is not really bad, there are a whole lot of smartphones with similar numbers in this price range. In terms of gaming, the Snapdragon 625 comes with Adreno 506 GPU which is enough for mainstream level gaming. Games like Snowboard Party: World Tour, Sniper, Ghost Warrior, Ballz, FZ9: Timeshift – Legacy of The Cold War, and Need For Speed: No Limits worked pretty well.

Games Tested on Xiaomi Mi A1

Xiaomi Mi A1 has a 64 GB internal storage with microSD support up to 128 GB. Apart from the internal storage, it offers unlimited high-quality Google Photos storage. Check out the benchmarks of the storage, the numbers are amazing. The camera is the main highlight of the Mi A1. Having a dual camera means taking photos with bokeh effect which is now a popular thing among dual camera smartphones. There are two 12 MP cameras on the rear side, one is wide angle lens and other is a telephoto lens that works together to snap pictures with depth-of-field effects. Plus, the telephoto lens can zoom 2X optically.

Although there seems to be no wide angle lens, the Portrait mode zooms in the object, and the latter being treated as a wide-angle photo. The camera uses Beautify 3.0 facial retouching allowing to capture good portraits. The accuracy of snapping the portraits is good in the daylight, however, it struggles in the low light. You won’t be able to capture any good portraits in the low-light. You’ll get grainy photos and the flash doesn’t work with Portrait Mode.

On the other hand, the default camera is just above average, captures daylight photos good, not the best low-light images. Honor smartphones such as Honor 6X has a better camera overall. Here are some camera samples that will show you how the camera performs.

The 3,080 mAh battery sounds mediocre as we have over 4,000 mAh battery capacity on other similar priced smartphones – Xiaomi Redmi Note 4, Lenovo K8 Note, Coolpad Cool Play 6. However, the battery performance in our test turns out to be excellent. The Mi A1 lasts 2 days on using the phone occasionally and that’s quite good for a mid-range device. We even managed to run the phone more than 3 days on minimal use. Since it’s using a 14nm Snapdragon 625, expect to run more than a day on a single charge for heavy use. Xiaomi Mi A1 looks bold, the build is fantastic, plus it guarantees Android software updates. While MIUI has built up its name, Xiaomi users have to play with a new user interface. The camera is impressive in terms of taking portraits, performs well especially in the daylight, not the best in the low-light. For a price of ₹14,999, this is the best phone you can get, Xiaomi Mi A1 highly recommended.

How to reset AutoPlay Settings to defaults in Windows 11