Claiming to be the first company to popularise the ‘phablets’ concept in the Indian market (despite Samsung being the first to introduce it), Xiaomi set out on a journey to capture the untouched market segment by offering smartphones which almost blank the divide between tablets. The Xiaomi Mi Max was its first such offering. Touted to be ‘the new big’, we find out if it indeed does live up to its expectations. 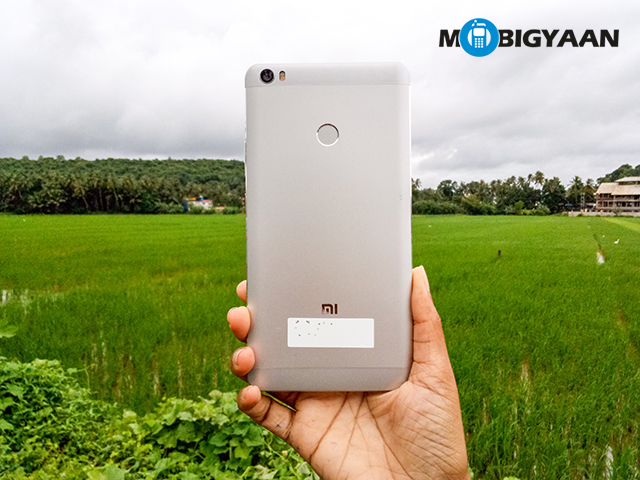 On the first impression, the Xiaomi Mi Max looks like an oversized Redmi Note 3, stretched all the way to the 6.4 inch mark. As always, Xiaomi has offered an excellent build quality for the device with a full metal body. Even the plastic caps at the top and bottom (which hide the antennas) are very well masked and cannot be differentiated from far. As the name suggests, the highlight of the smartphone is the size, which plainly put is way bigger than the average smartphone in the market, almost nearing the tablet segment. The handset has a massive display measuring 6.44 inches with very minimalistic bezel running along the edges. However, the black border running around the display is slightly distractive. The chamfered edges and the smoothly rounded corners make it surprisingly comfortable to hold despite the size.

Owing to the size, putting the phone in the pocket is slightly difficult. While it does fit (almost) in your jeans pocket, it becomes very uncomfortable to sit or even stand without the bystanders wondering what is going on with your pants. However, it does seem perfect to be carried in your bag or purses for the ladies. Despite being comfortable to hold, navigating on the phone is sometimes a task, unless you have surprisingly large hands. Further, the fingerprint scanner placed on the back is out of reach for average sized hands.

The front side is plainly simple with just the perfectly aligned proximity sensor, earpiece and front facing camera on the top. There is also a notification LED on the top placed very discreetly. The three capacitive buttons are placed at the bottom. The back of the phone has just the camera module on the top left corner and the fingerprint scanner in the middle. At the bottom is the Mi logo. The Volume rocker and the Power key are placed on the right edge. The left edge just has the hybrid SIM slot where in you can either place two SIM cards (nano + micro) or a SIM card and a microSD card. The top has the 3.5 mm audio jack, the IR blaster and the secondary mic. At the bottom, there is the microUSB port in the middle with grilles on the either side.

While most of the Xiaomi handsets have excellent display, the Xiaomi Mi Max display is impressive despite the size. Being one of the key selling points of the smartphone, the display offers more screen estate while maintaining a decent screen-to-body ratio thus being able to add in more content. The display is very much visible in sunlight and is very bright.

The sharpness and contrast is well maintained with an excellent colour reproduction. Users can further make adjustments to the colour and contrast in the Settings. The ‘Read Mode’ reduces blue light emissions and prevents eye strain when continuously using the device or during the night hours.

While the Mi Max comes pre-loaded with the MiUI 7, we managed to get the global beta version of the MiUI 8 running on the smartphone. While the software is based on Android Marshmallow, Xiaomi has heavily customized it but you tend to get accustomed to the intuitive interface with time. The transitions and animations add more visual appeal to the interface. However as part of the customization, Xiaomi has pulled off some of the native features of Android Marshmallow, including the Google Now on Tap, Doze Mode etc. Even worse is that some apps including Amazon.in face compatibility issues. Given the size of the handset, Xiaomi has added quite a few accessibility options like the One-handed mode which reduces the screen size to 4.5 inches, 4 inches or even 3.5 inches. Also present is the Quick ball option (MiUI 8 feature) which allows users to select up to five shortcuts which can be placed within finger reach.

While the camera department of smartphones with bigger displays is generally neglected, Xiaomi has done well with the Mi Max by providing a massive 16 MP camera setup with f/2.0 aperture, PDAF and dual-tone LED flash. There is also a front facing 5 MP camera. The rear camera is capable of capturing some really decent images in normal conditions. However, we had a few issues with the auto focus. As expected, picture quality drops in low light conditions despite the dual-tone LED flash. However, it has to be one of the best camera offerings at that price point.

Interestingly, Xiaomi offers quite a few manual controls for the camera making it easy for the professionals to make the necessary adjustments. The photo app also comes with many built-in filters. The phone has a 5 MP selfie camera. The selfies taken through the front camera are pretty impressive. It also has a Beauty Mode which softens the skin tone and makes the necessary improvements to make the selfies better. The hexa core Snapdragon 650 processor clocked at 1.8 GHz offers optimal performance coupled with the 3 GB of RAM. The handset scored 78823 on the AnTuTu benchmarks. Also we had absolutely no issues multi-tasking using the phone. There wasn’t any noticeable lag even when we were running multiple processor-intensive apps simultaneously.

The phone owing to its huge display is an extreme delight for gaming. Not only does the display make the game look better but the processor handles even heavy games like Asphalt 8 smoothly. Also the Adreno 510 GPU ensures that there is absolutely no lag to spoil your gaming joy. However, there is mild but noticeable heating which automatically cools down owning to the frame.

The fingerprint scanner on the back is pretty fast at recognizing the fingerprint. It also manages to recognize the fingerprint even when the finger is (just) slightly wet or turned. It can also be used to lock the individual apps. Interestingly, as a MiUI 8 feature, Xiaomi lets you register completely different sets of fingerprints for the Second Space.

The device comes with a standard 32 GB of inbuilt storage instead of storage options. Storage space available to user is slightly above 24 GB. The storage can further be expanded up to 256 GB using microSD cards inserted in the hybrid SIM card slot.

The phone has 4G LTE support and supports a wide array of LTE bands along with carrier aggregation. The phone is also VoLTE ready. Also present is Wi-Fi 802.11ac, Bluetooth 4.2, USB-OTG and GPS and GLONASS support. An interesting feature we found was the IR blaster. While it is generally considered useless in recent times, Xiaomi has put it to good use with the Mi Remote (MiUI 8 feature) which lets you control a wide range of home appliances including TV, AC and even Set-top boxes. The remote could register almost all appliances found in Indian market and worked pretty accurately in most cases. Another key feature of the Mi Max is the long-lasting battery. Xiaomi used a non-removable 4850 mAh battery for the phone while managing to keep the weight low. Interestingly, the battery was easily able to last an entire day even after extensive usage. With average usage, the battery lasted more than two days.

While the Xiaomi Mi Max is one of the very few in its segment, the trend of smartphones with display sizes bigger than 6 inches and less than 7 inches is expected to rise in the next few months. Xiaomi seems to have hit the centre point between offering the immersive experience of tablets with the design and features of a smartphone.

While the handset is definitely big, the experience while gaming or watching videos or consuming other media is definitely noteworthy. Added to that, the performance and long-lasting battery life make it just perfect.

At the price point of Rs. 14999, the Mi Max is definitely a steal deal for anyone who is looking for a tablet which is more of a phone and has amazing performance. But that someone definitely needs to have big hands and big pockets to hold the phone.

Prisma app to get support for video editing in coming weeks