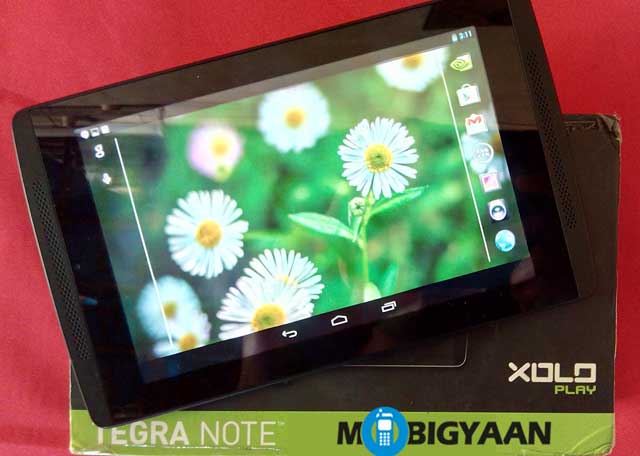 The Xolo Play Tegra Note is the localized version of the Nvidia Tegra Note 7 that was launched last year. The entire device, right down to the hardware specs is modelled by Nvidia, Xolo is just the manufacturer. The device is another addition to the Play series of the company. Before we start with the review let’s take a glance of the specs of the tablet. The Xolo Play Tegra Note has a very bright 7 inch display. The presence of the thick bezels around the side do make the tablet look big and make it difficult to operate with one hand. On either side of the screen there are dual stereo speakers. There are no hardware buttons or other obtrusions on the front screen. There is also a small VGA camera right at the top centre of the screen. The Power button of the device is placed on the top edge whereas the volume rocker is situated on the right edge. There is also the microSD card opening just above the volume rocker. The top edge contains the audio jack, micro HDMI port and the micro USB port, besides the power button. The bottom edge has an additional speaker grill for extra bass. The left bottom corner houses the removable DirectStylus. The back of the device is made of rubber thus providing extra grip. TEGRA NOTE is carved out in the middle of the rubber back. However there are plastic cuttings towards the edges, which seem unnecessary. There is also a 5 MP camera at the top left corner on the back.

Like most of the Xolo tablets, the Xolo Play Tegra Note has a non-removable back plate, thus concealing the battery and other hardware within. The device is powered by the recently released NVidia Tegra 4 processor with quad core architecture and clocked at 1.8 GHz. There is 1 GB of RAM and 16 GB of which 12.43 GB is available to the user. The memory can be further expanded up to 64 GB with a micro SD card, if required. The device is equipped with a DirectStylus, which sets it apart from most of the 7 inchers and also makes it easy to use.

The Xolo Play Tegra Note has a bright 7 inch display with resolution of 1280 x 800 pixels. While the picture quality is quite sharp, a slightly higher display resolution would be highly appreciated. The display is bright enough to be viewed even under direct sunlight and has decent viewing angles. There is also a light sensor which accurately adjust the brightness depending on the surroundings. The device comes equipped with the DirectStylus, which uses the NVidia DirectStylus Technology to provide a responsive stylus experience with finer point and broader stroke control. On removal of the stylus, the DirectStylus Launcher menu pops up, which has apps like drawing, writing or any apps added by the user.

On drawing out the stylus, the menu bar at the bottom gets two new tools. The first one is the Stylus toggle mode, which disables all touch inputs other than those made with the stylus. This is highly useful when drawing or writing using the stylus as it prevents any accidental touch. The other tool is the screen capture tool, which lets you take a screen shot of the entire screen, part of it and then save it.

The tablet comes pre-installed with the stock version of the Android 4.2 with a few NVidia apps and services. However, since the software of the device is controlled by NVidia, it is responsible for the updates. Towards the end of the 2013, it released the Android v4.3 update for the tablet, which measures 389 MB. The update adds a lot of new features including the full screen mode and AO-HDR mode for the camera. Either ways, the UI is quite smooth and easy to operate. There are two dropdown menus, one which displays the notification and the other which displays the quick menu options. There are apps like Tegra Draw and Write which can be used along with the stylus to sketch or even write as though writing on a notebook. There is also the TegraZone app, which has a range of Tegra 4 optimized games. The Xolo Play Tegra Note has a 5 MP rear facing camera and a front facing VGA camera. The rear camera uses the NVidia Chimera computational photography architecture for improved images. There is also the Awesomize feature which enhances the photos after clicking and then saves them. While the camera performs averagely well in outdoor conditions, it is slightly disappointing in indoor conditions. The camera is not at all usable in low-light conditions and the absence of the flash makes it even worse. The front camera is only suitable for video calls and is not recommended for other purposes. The camera has the stock app like menus with the options placed on the ring around the click button. The Android v4.3 update add the Always ON – HDR mode, which slightly improves the image quality. The Xolo Play Tegra Note with the NVidia Tegra 4 CPU is a powerhouse. The devices blasted through the benchmarks scoring a whopping 35525 points on AnTuTu benchmark, which is way higher than even the Samsung Galaxy Note 3. There was a remarkable improvement in performance after the Android v4.3 update. Every app and service ran smoothly, with no crashes or other incidents. Gaming on this tablet is certainly fun. Not just does it have excellent gaming performance with quality graphics, but also high quality sound from the dual front speaker, which give an amazing experience. All the games, including the resources consuming worked very smoothly with no lags and unexpected crashes. We tried the some games like NFS, FIFA and Riptide. All of them worked smoothly despite consuming resources. Playing is very comfortable and smooth. Also the inbuilt sensors like accelerometer are very accurate thus making it easier to win.

The Xolo Play Tegra Note comes with an impressive 4100 mAh non-removable battery. Not only does the battery last longer, but it also charges remarkably fast. On an average, on a full charge, the battery last for almost a day and a half (32 hours) while in moderated use. On rigorous gaming, browsing and other strenuous activities, the battery easily lasts for as much as 12 hours. Best of all, it hardly takes an hour to charge the battery to 100 percent from zero. Even on heavy usage, there is hardly any heating observed.

The Xolo Play Tegra Note is highly dependent on Wi-Fi for internet connectivity due to the lack of cellular connection options. It would be highly favourable to add SIM support to this otherwise multifunctional tablet. The Wi-Fi radio on-board the device is very sensitive and manages to catch even the weakest signal broadcasting nearby. While it is rarely seen in devices, the tablet comes with a micro HDMI port which can be used to connect to a bigger display like TV or projector.

The Xolo Play Tegra Note is an excellent tablet. It is the device that every mobile gamer dreams of. The performance is outstanding and the stylus is an added advantage. While it does lack cellular connectivity, the pricing seemingly makes up for it. It is a must have if you like working on a larger mobile device and have the slightest passion for gaming.