Tablets are said to be gaining a slight importance in the mobile market owing to the larger display. While tablets are known to perform very well for editing documents on the go, the same cannot be said about gaming. But the Xolo Play Tab 7 is one tablet which provides the perfect gaming experience on a 7 inch. 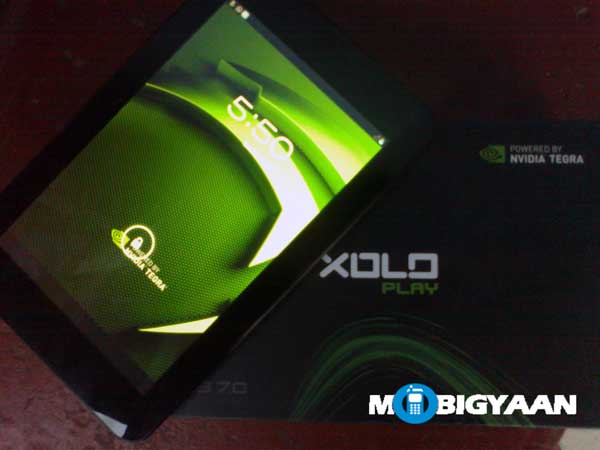 The Xolo Play Tab 7 is the company’s tablet offering in the Play series which also includes the Xolo Play T1000 smartphone. The series is marked out by the NVidia Tegra 3 processor powering the devices. Before we start with the review let’s take a glance of the specs of the tablet.

Specs of the Xolo Play Tab 7: The Xolo Play Tab 7 has a large 7 inch display with unnecessarily large bezels around the display making the device look comparatively bigger. The front of the tablet is just plain with no hardware buttons or any other obtrusions. There is only a 2 MP camera in the top left corner. The Power button and the volume rocker are lined up on the back edge. Due to the concavely curved edges the buttons fall slightly more on the back of the device than the edges. The back of the Xolo Play Tab 7 has a shiny metallic finish with black colored plastic grip on the side. The 3.5 mm headphone jack, the micro USB port and the micro SD card slot at lined up on the top edge. The speaker grills are located at the bottom of the back. The NVidia Tegra logo is stamped just above the speaker grills.

Most of the hardware of the Xolo Play Tab 7 is concealed inside due to the non-removable back plate. There is a quad core NVidia Tegra 3 processor clocked at 1.3 GHz along with 1 GB of RAM and 8 GB of internal storage inside. The microSD card slot on the top edge can be used to expand the memory up to 32 GB. Unfortunately, there is no SIM card slot in the tablet. The Xolo Play Tab 7 has a 7 inch IPS display with support for multi-touch. The display resolution is 1280 x 800 pixels that amounts to a pixel density of 216 ppi thus giving a bright and averagely sharp display output. While the screen has good viewing angles, it is very glossy and not just attracts a lot of fingerprints, but also makes it hard for viewing in bright outdoors. Unfortunately there is no ambient light sensor and as such you have to adjust the brightness manually. Overall the tablet runs a near stock version of Android 4.1. The dropdown notification screen is at the centre in the portrait mode and at the left corner in the landscape mode. Despite running a near to stock Android version, not many Google service come pre-installed. While features like lock screen widgets aren’t available, you can directly open the camera, google search by swiping left or up respectively. The music player app is quite good with a decent sound output from the two speakers. There is also a Xolo Tegra Game Zone, which besides recommending the latest and best games, also offers insights into gaming.

The Xolo Play Tab 7 has just one front facing 2 MP camera. Sadly there is no rear facing camera. The 2 MP camera is fine for the normal video chats but is requires good lighting. It fails to perform in low light conditions. The in-built microphone is an added advantage. The camera can also record video of 176 x 144 pixels resolution. The NVidia Tegra 3 powered Xolo Play Tab 7 performs well above average. The device does comparatively well at the benchmarks. The tablet score 13437 on the AnTuTu Benchmarks, which is appreciable for a tablet of its calibre. While the UI and most apps run very smoothly, some apps including Facebook, did crash at times. However the real performance of the tablet is seen in the gaming. The NVidia GeForce GPU provides an unmatched gaming experience with perfect movement without any lags. Games like NFS are a pleaser to play with the inbuilt accelerometer which is very sensitive. Even other games like Angry Birds run very smoothly. Whatever the tablet lacks on other fronts, it certainly does compensate on the gaming side.

The Xolo Play Tab 7 is equipped with a massive 4000 mAh non-removable Li-Po battery which easily lasts for nearly six hours on continuous usage which includes Wi-Fi browsing and gaming. On a less rigorous use, the battery can last for up to 10 hours on a single charge. The battery also charges up quickly and takes hardly an hour to fill up from zero percent. The device also comes with the proprietary Xolo Power management app which helps optimize the battery usage. The app lets you set a night mode and also lets you automatically disconnect Wi-Fi and other services on low battery. The battery display also shows estimated time available and the profiler shows the activity of the cores of the processor. The battery does however tend to get heated during rigorous usage.

As mentioned earlier, the Xolo Play Tab 7 lacks cellular connectivity and has to entirely depend on Wi-Fi. While the Wi-Fi works quite well, the reception is comparatively poor and requires the device to be close to the signal for proper reception. The Bluetooth 4.0 works quite well so does the in-built GPS sensor, which is only usable on offline maps unless you have an active Wi-Fi connection on the go.

The Xolo Play Tab 7 is a good tablet. It is definitely worth the launch price of Rs. 12999 if you are gaming freak. Though it lacks cellular connectivity it does offer a good performance not to forget the superior build. It would be even better if it could get the newer Android versions.