XOLO, the brand which is best known for smartphones running on Intel’s processors but lately the company has also shifted its focus to launch devices with the cheap MediaTek processor so that it is able to cater the needs of buyers in the budget smartphone market. And recently, the company went on to launch the XOLO Q700 Android smartphone with a quad-core processor and we got a chance to review the device. 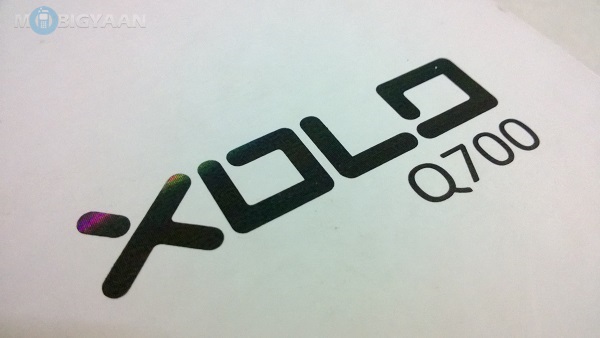 The XOLO Q700 arrives in a nice white box which no image of the smartphone on it but does contain the following: To start with, we have the XOLO Q700 packing in a 4.5 inch IPS display with edge-to-edge glass and a decent resolution of 960 x 540 pixels (qHD) which has a fair viewing angle and while out in bright sunlight, you will not find it much hard to use the phone. The screen can show up to 16 million colours and video watching is commendable on the XOLO Q700. The touchscreen is responsive and we couldn’t find any issue while using it but one drawback is that the screen is a fingerprint magnet and the company has also provided a scratch guard in the box. The XOLO Q700’s design is not something unique but the build quality is great and it arrive with a rectangular design with rounded-edges and given that it packs a 4.5 inch display, it is neither too small nor too large to hold and use which makes it the best option for people who want a large display but not as large as a phablet.

On the back we can find the decent 5 MP camera which is coupled with BSI sensor and a LED Flash. Also, we can find the secondary microphone which helps in noise reduction and the logo of XOLO. The removable back cover is rubberized and thus has a great finish and makes it easier for users to hold the device. On the right you will find the Unlock button which also doubles as the power button but unfortunately there is no dedicated camera button on the XOLO Q700 which makes the image clicking a bit harder for people who are frequent image takers. Check out the Hands-on images of the XOLO Q700 here

On the left, you will find the volume rockers which are easily accessible. Under the hood we have the dual mini SIM slots (3G + 2G) along with the microSD card slot. The powerful 2400 removable battery is also placed here. XOLO has packed a powerful 1.2 GHz quad-core processor on the Q700 which makes the operation of the smartphone buttery smooth when it is combined with the latest Android 4.2 Jelly Bean OS. Multitasking is something which is impressive on the device even when you open two heavy-duty games and switch between them. 1 GB of RAM helps the Q700 to perform well while 4 GB of internal memory will help users to store all their data. Not to forget that the memory can be expandable using a microSD card. The XOLO Q700 packs a decent 5 megapixel camera which has a BSI Sensor on the rear along with a LED Flash which takes decent low light images and nice shots in normal conditions. The front camera on the device is of VGA resolution which is just okay for making video calls. We have covered the camera of the XOLO Q700 and compared it with the Nokia Lumia 720. Now apart from the quad-core processor, the second best thing about the XOLO Q700 is that it arrives with the latest Android 4.2 Jelly Bean OS on-board which is smooth to use and bring in loads of new features. XOLO has just customized a few icons in the UI and rest of the UI stays the same as that on the stock OS and a few preinstalled apps will be available for users out-of-the-box. Overall the experience on the Android 4.2 Jelly Bean OS is a great one when coupled with the quad-core processor.

But there is one glitch which we faced during our time with the device and it was when the phone was connected to the charger and when you try to use the device, the device goes mad and loads of things start to happen on the display even without you doing anything. This might be some issue with the OS optimization and could have been limited to a few devices and we hope and update would solve it. The XOLO Q700 is the first Android Smartphone to arrive with the multiple profile features and the company has baked it on nicely. By the default, the main profile is of the administrative user and the second available profile is the Kids Mode wherein you can select the apps which can be accessed by the kids in your house and it also allows you to set up a timer for the amount of time you would like to grant access to the kids. Another interesting app is the XOLO Secure which will let you to safeguard your smartphone and critical data inside it in case you lose your smartphone or it gets stolen. The XOLO Secure arrives with an Anti – Theft program which will enable you to remotely enable tracking of your device, wipe data, secure lock and even secretly capture the photo of the thief. You can configure two numbers which will be notified on SIM change and also help in recovering your device in case of theft. And to control your device remotely, you can set a 6 digit PIN. With XOLO Secure, you can also backup and restore your personal data to could which can be restored or even accessed using your Google account.

The XOLO Q700 is powered by a powerful 2400 mAh battery which is huge and hard to find in a device in the sub-Rs.10,000 category Android smartphones. On a high usage, the Q700’s battery lasted for about 6 hours for us which included loads of calls, Facebook and twitter usage on dual-network apart from a good number of SMSes. And on a regular decent usage, we were able to extract about 11 hours of backup from the XOLO Q700.

At Rs.9999, the XOLO Q700 is a great buy for users who are looking for a decent screen and a device with a quad-core processor. The Q700 is here to beat all the devices in the given price bracket and is a nice buy.