by Amol Mathur
in BlackBerry, Reviews

BlackBerry, that one company which was once considered and owning the handsets from them was considered as a pride have seen a downfall since it wasn’t able to cope up with the boom of Android and iOS but the Canadian giant has not given up. And in one such move, the company announced the launch of the BlackBerry Z3 smartphone which was targeting at the people who had a constrain on their budget and we got the device to review and here are our thought on the phone. 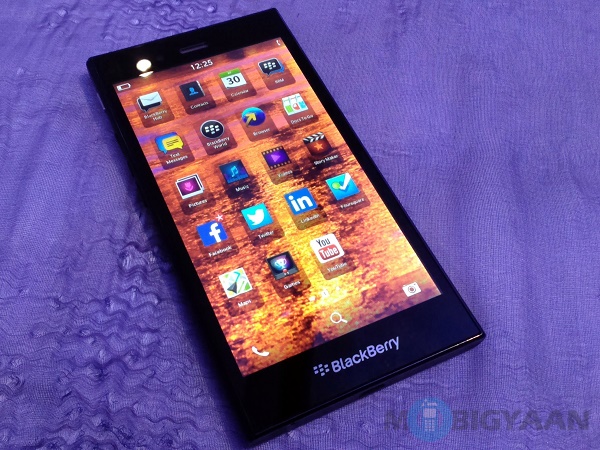 BlackBerry Z3 has a 5 inch IPS display which comes with a resolution of 960 x 540 pixels which is decent and has good viewing angles. The brightness works well but the phone doesn’t come with an auto brightness option, so when you step out of your home, you will have to manually adjust the brightness which could be irritating a lot. But while indoors, the display is nice to use. Touchscreen of the phone works well.

Design wise, the BlackBerry Z3 arrives with a candy bar shape and the built quality is great. The phone is sturdy and feels nice to hold, though it is bulky. Above the display, you will find the earpiece, 1.1 MP front facing camera, ambient light sensor and proximity sensor. Below the display the company has placed its branding.

On the right of the phone, you will find the Memory card slot and the SIM card slot while on the left side, we have the Power button, Volume rockers and in between then, the mute button. At the bottom, we have the microUSB port and the micrphone hole. And the 3.5mm audio jack is placed on the top of the phone. On the back we have the 5 MP camera with LED Flash and a secondary microphone. Below, we have the loudspeaker and other necessary FCC certifications. The BlackBerry Z3 is powered by a 1.2 GHz Krait 200 dual-core Snapdragon 400 processor which is coupled with 1.5 GB of RAM which just somehow manages to keep the device running and truly is not doing justice to the device as there is a lot of lag even when the BlackBerry 10.2 OS is smooth. We have reviewed it in our BlackBerry Z30’s review.

We wish that BlackBerry had at least included a quad-core processor in the BlackBerry Z3 but thankfully the 1.5 GB RAM saves the day. The multi tasking is also limited to only 4 open apps in contrast to 8 on the BlackBerry Z30 and Z10. But overall, users will be satisfied with the performance of the Z3.

The phone comes with 8 GB of internal storage of which about 5.5 GB will be available for use which is enough for users initially and this will further be expandable using a microSD card slot.

And coming to the connectivity part, the BlackBerry Z3 has the usual 3G, 3G, Bluetooth 4.0 LE with aptX, Wi-Fi, Miracast support, GPS, FM Radio and 3.5mm audio jack apart from the microUSB port which is all in all sufficient. You will be able to transfer your data to your laptop or PC using the BlackBerry Link software and also update your device using it. The BlackBerry Z3 smartphone runs on the Blackberry 10.2 or with the release 10.2.1.2977 and is a major improvement over the first release of the BB 10 OS. The company is trying its best to offer the existing users and the possible new users a totally new experience with the all gesture based UI, which I have always liked since the time I reviewed the BlackBerry Q10. The large 5 inch screen lets users to take advantage of the large canvas and freely use the OS.

Swipe from the top of the screen and you will get the quick actions options life switching on the Wi-Fi, Screen Rotation, Bluetooth and more.

Swipe from the left and users will have the BlackBerry Hub waiting for them with all the notifications from all their social accounts and emails. The application catalogue for the BlackBerry 10 OS is still limited but is expanding steadily but then compared to all the apps available on the iOS and Android platform, it still lags behind. But then users can sideload Android apps on to their BlackBerry Z3 smartphone as it has built-in Android runtime which should let you use a good number of Android applications on your BlackBerry Z3. In today’s world, the camera on the smartphone plays a vital role as it helps users to capture the happenings around them and the BlackBerry Z3 comes with a decent 5 MP camera on the back with LED Flash which offers a lot of options for users to use and the modes include the Normal, HDR, Burst and Stabilization. Users will be able to record videos at 1080p which is good. The BlackBerry Z3 is powered by a powerful 2500 mAh battery which is good. Power users will easily be able to stretch out a day without searching for a power plus to charge their phone. And on average usage, the phone lasted for about 28 hours for us, which is good for sure, while the standby lasted for about 3 days with a little usage of Wi-Fi. The BlackBerry Z3 has been priced at Rs.15,990, which is indeed a bit overpriced going by the overall specifications and everything that the phone offers. And we wish BlackBerry had placed in at least in the sub-12000 category. But then the BlackBerry Z3 is a decent buy for people who want to try out the new BlackBerry ecosystem and don’t really want to invest much but I personally would suggest the BlackBerry Z10 which is just about Rs.2000 more than the Z3 and has better specs.