Gionee A1 Hands On and First Impressions [Images]

More and more manufacturers have been launching selfie-centric cameras lately, because for some users, the camera on the front is equally important as the camera on the back. There are also people out there who can’t start their day by taking a selfie and then posting it on the Internet. To keep up with this trend, Gionee too launched a selfie-centric smartphone called Gionee A1. The Gionee A1 comes with a 13 MP camera at the back, however, for selfie lovers, the company has packed a 16 MP camera on the front which is accompanied by LED flash. We have received the review unit of the Gionee A1 and here’s our first look at this device. 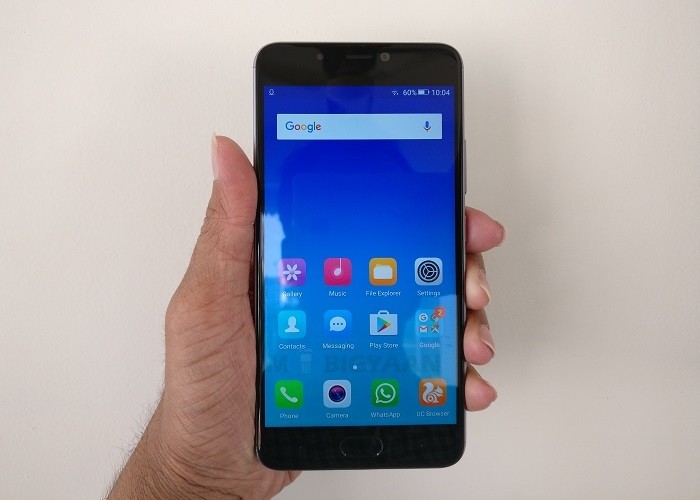 The Gionee A1 flaunts metal uni-body construction, a design language incorporated by many OEMs into their smartphones. While some smartphones with metal finish tend to be slippery, the metal finish of the device makes sure that it doesn’t slip out from your hands.

The Gionee A1 comes with a 5.5-inch Full-HD IPS display which is covered with Gorilla Glass 3 for extra protection. Below the display is the fingerprint scanner which is housed on the physical home button. This home button is flanked by capacitive navigation buttons which aren’t backlit. There’s also a 16 MP camera on the front which is accompanied by LED flash so that you can take brighter selfies in low-light conditions.

For regular shots, you have a 13 MP snapper at the back along with LED flash below it. There’s also the Gionee moniker at the bottom and you can also see the antenna lines which expand all the way up to the edges of the display.

At the left of the device is the Hybrid SIM slot. What that means is that you can either use two SIM cards at once, or, you can use one SIM card and use the other SIM slot to put the microSD card in it to expand the storage up to 256 GB. While the SIM slot is located on the left, the volume rocker and power button are located at the right side of the device.

Moving on, the Gionee A1 has the standard 3.5 mm audio jack on the top while the microUSB port rests at the bottom. You can see there are two grilles flanking the microUSB port and might think that they are speakers. Well, that’s not the case. Only of of them is the speaker while the other is the primary microphone.

The Gionee A1 runs Amigo OS 4.0 out of the box which is based on Android 7.0 Nougat. While this definitely isn’t the latest version of Android, it’s definitely better than what you would find on smartphones which are still launching with Android 6.0 Marshmallow and priced higher than the Gionee A1. The UI on the Gionee A1 is similar to what you would find on most of the Chinese smartphones. All the installed apps are on the homescreen and there’s no app drawer. While I personally don’t prefer this kind of UI, it’s strictly a matter of personal choice. If you don’t like this UI, you can always change it by installing a third-party launcher.

Also, while the quick settings on most smartphones can be accessed by pulling down the notification bar, the settings on the Gionee A1 can be quickly accessed by swiping from the bottom of the screen. This is something which might take some time getting used to.

So, to conclude, the Gionee A1 looks like a decent device, however, we haven’t put it through proper testing yet so it would be too early to comment on its performance. Having said that, we will spend some more time using the Gionee A1 and will soon publish our full review. If you have any questions pertaining to this device, do sound off in the comments down below.