Microsoft recently launched two new budget smartphones in India, the Lumia 640 and the Lumia 640 XL. Both the phones were unveiled by the company at MWC earlier this year and the devices are now finally available. Microsoft was kind enough to lend us a Lumia 640 XL for review and we have been using it for some time now. The Microsoft Lumia 640 XL has a pretty solid build quality, as it has been expected from Microsoft/Nokia devices. There’s the solid colorful polycarbonate casing, which comes in bright colors. The Lumia 640 XL comes in various color options including Cyan, Orange and the usual Black and White. We got the Bright Orange Lumia 640 XL and it is an attention grabber, thanks to that lovely paint job. The design is similar to what we have seen on various other Lumia devices, which isn’t a bad thing, considering we have always liked the Lumia design language. The phablet measures 157.9 x 81.5 x 9 mm and weighs 171 grams. So, yes the device is bulky. While the device is indeed big, the matte polycarbonate offers a great grip, which should make sure your device doesn’t fall too easily. While it’s easy to hold the device, it’s not really easy to use it. Thanks to the huge display, reaching the display’s top is hard work and you need to use both hands. Well, that is expected when you buy a phablet. The front of the device is covered by the Corning Gorilla Glass 3 and the proximity sensor and the 5 MP front facing camera sit on the usual top position. The front also packs the speaker and the microphone. There are no buttons on the front since Microsoft is using on-screen buttons for the device. The back features the Microsoft branding, which is a good contrast on the colorful polycarbonate shells. There’s also the Zeiss camera branding along with the speaker, 13 MP camera and flash. The rear camera is protruded just a bit and although, it does not cause a problem while holding the device, it makes us sceptic of the camera lens getting scratches. The left side of the device is blank, while the right side is busy with the power/lock button and the volume rockers. Sadly, there’s no camera button for people who want a hardware snapper. 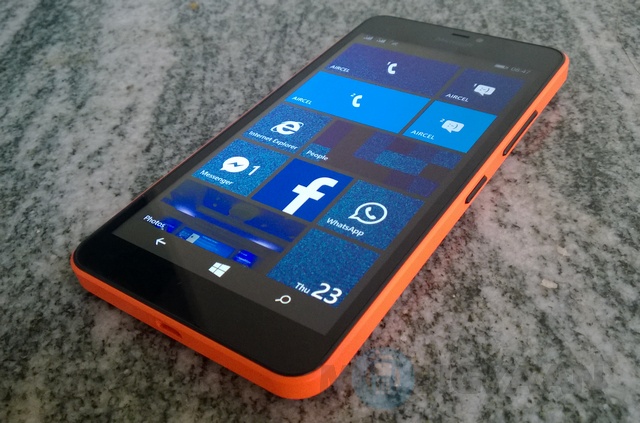 The Microsoft Lumia 640 XL features a lovely design, which is not a surprise and although it’s huge, the matte back feels great in the hands and as we mentioned, offers great grip. We would have liked Microsoft to cut off on bezels more and make the device slimmer but who are we kidding, the Lumia 640 XL is a phablet, an “XL” sized device indeed. Overall, the Lumia 640 XL features the traditional Lumia design, which is solid and lovely but the bulk might not be for everyone. The display has a pixel density of 259 ppi, which is not really good enough for such a massive display. Microsoft had to cut corners somewhere and the display resolution is where we think it has. While the display is pretty decent, the low pixel density makes sure we see some fuzzy texts and some pixels. Microsoft has implemented the ClearBlack tech, which results in deep blacks. The viewing angels are okay but nothing out of the ordinary. The display also offers decent sunlight legibility and Microsoft lets you turn on sunlight readability, which makes the display much more readable when you are out. Microsoft also offers a default brightness setting for better battery performance. Along with that, if you don’t like the color reproduction of the Lumia 640 XL, you can set it as per your needs. There are three options: standard, cool, vivid, advanced. We have also been used to various Lumia specific customisations like Glance and double tap to wake and they are here. We have always been a fan of the Glance screen and we are glad the Lumia 640 XL supports it. There’s also the option to double to wake up your device, which is convenient indeed.

Overall, even though the 57-inch IPS LCD panel used in the Lumia 640 XL is decent enough, we wish Microsoft would have included a higher resolution display. Having said that, it’s not that bad and people who can live with the lower resolution should do fine.

The Microsoft Lumia 640 XL comes with the Lumia Denim update on top of Windows Phone 8.1 Update 2, so there are some brand new features. Windows Phone has been panned all across the universe for lacking in features and apps. So, let’s find out if the things have changed for the better on Microsoft’s platform.

The Lumia 640 XL features the same Start Screen with the Live Tiles. Microsoft has also added support for folders, which it likes to call Live Folders, We like the transitions on the Live Folders and it shows the live updates even from the folders, thus the “Live” moniker. There’s the ability to set your wallpapers as the background for the Live Tiles. While there’s not much to customize, you can set the accent color and shuffle between Black and White backgrounds. The locksreen is the same we’ve now been accustomed to with Windows Phone. It lets you see the notification badges at the bottom for missed calls, messages and third party apps like WhatsApp and Facebook as well. There’s the new Settings interface, which finally sorts things out. The notification panel, which Microsoft calls Action Center features four toggles, which can be set according to your needs. Sadly, the toggle list does not feature a Data toggle. The Action Center packs all your notifications but unfortunately, there are no interactive notifications yet. Not much has changed with Windows Phone and the problems that were part of the platform still persist. Some things have become worse, for example the Music app, which is certainly a pain in the back. Microsoft has preloaded the device with a lot of apps including BBM, BookMyShow, Facebook, Fitbit, Foodpanda, MobiKwik, NDTV, Olacabs, and WeChat. You might find some useful while some unnecessary. You have the ability to uninstall them, so that’s not a problem. There are also the several Lumia apps like Lumia Beamer, Camera, Cinergraph, Creative Studio, Moments, Selfie and Storyteller. There’s also the Nokia’s HERE Mapping suite, which is my personal favourite when it comes to mapping apps.

Windows Phone should be good enough for people buying their first smartphones but people coming from Android or iOS might not find the platform favourable.

The Microsoft Lumia 640 XL is powered by Qualcomm’s Quad-core Snapdragon 400 processor clocked at 1.2 GHz along with Adreno 305 GPU. The multitasking needs are handled by the 1 GB RAM. As with every other Windows Phone we have tested, the Lumia 640 XL is fluid. Microsoft has optimised its platform to work well with modest hardware, so it’s not a surprise to see it work well on the phablet. We did not find any lags while navigating the interface and multitasking was pretty good too.

We did find some high intensive games get a little sluggish at times but that’s not a deal breaker at all. Overall, we are quite pleased with the performance of the Lumia 640 XL and we are sure you won’t be disappointed.

The Microsoft Lumia 640 XL surprised us with its great audio performance. The speakers on the rear are quite loud and the quality is pretty acceptable too. While we are not fan of the headsets bundled with the device, the sound quality is okay there as well. The “phone” part of the Lumia 640 XL works as we expect from modern day smartphones. The calls were loud and clear and people on the other end found us pretty clear too. Microsoft has built the call and SMS blocking option right into the OS, so you don’t need a separate app.

The Microsoft Lumia 640 XL is powered by a 3000 mAh battery and we expected decent battery life from the device and well, we got it. We were sceptic about Lumia 640 XL’s battery life, considering the massive display but the battery life got us impressed. With a single charge and with day to day usage, we got a day of battery life and sometimes a day and a half. Overall, we are quite pleased with the battery performance of the Microsoft Lumia 640 XL.

Microsoft has equipped the Lumia 640 XL with some pretty capable cameras on both the front and the rear. The back features a 13 MP autofocus camera with Zeiss optics and LED flash, while the front packs in a 5 MP selfie snapper.

Microsoft has also included the Lumia Camera 5 app, which is now the default camera app on the device. The Lumia Camera app offers a lot of manual controls. You can toggle various options like White Balance, focus, ISO,shutter speed and brightness. The top right options give you the other settings like timer, bracketing, aspect ratio and more. The Lumia Camera app has been a great camera app and it’s arguably the best camera interface for people serious about the photos they take. Talking about the 13 MP rear camera first, the camera sensor has a  f/2.0 aperture and Zeiss optics, so we surely expect some decent results. Well, we had some pretty mixed results with the camera, While some shots were pretty good, some were not up to the mark. In well lit conditions, the pictures come out detailed and pretty good while some pictures have some noise, which ruin it. In low light, the camera captures good light but the noise becomes more apparent. Overall, the rear camera produces decent pictures but some pictures turn out a bit underwhelming. Check out some pictures we took from the Lumia 640 XL: The Lumia 640 XL packs in a 5 MP front-facing wide-angle camera and Microsoft pre-loads the Lumia Selfie camera, which lets you take selfies and edit on the go. The 5 MP snapper performs admirably when there’s decent light but in low light, it leaves a lot to be desired.

Concluding it all, the cameras are decent on the Lumia 640 XL for the price range but we were sightly underwhelmed, maybe because we expected more.

The Microsoft Lumia 640 XL features the usual array of connectivity options like WiFi, Bluetooth 4.0 and GPS. There’s Dual SIM and 3G support and Windows Phone also supports smart handling of the dual SIMs. There are separate text and call tiles for both the SIM options, which makes things a lot convenient. When we started reviewing the Lumia 640 XL, we wanted to know if it’s worth Rs. 15,999? Well, it’s not. The Lumia 640 XL is a decent device but it is indeed pricey, considering the competition right now. There are various Android phablets like the YUREKA, Redmi Note, Lenovo A7000 in the market with similar or better specs at almost half the price.

The device might be a good seller if the Redmond giant cuts the price but right now, it’s not a device I would recommend. If one needs a Windows Phone device with a big display, then the Lumia 640 XL should be good enough, thanks to its solid design, specs and the great battery life.

Samsung planning to use dual camera setup for smartphone