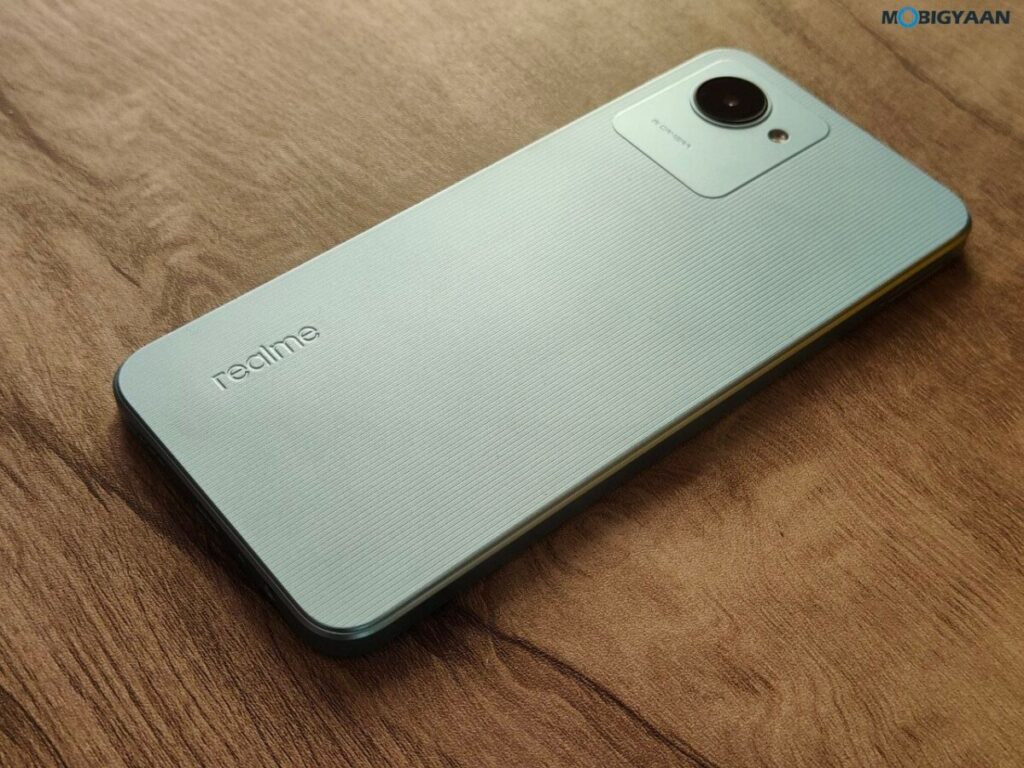 Similar to the recently launched realme C33 and the Narzo 50i Prime, the realme C30s has a new and slim design – it rather uses a Micro-Texture Anti-Slip Design which gives you a good grip when holding the smartphone. It has a flat design, it comes with flattened edges which we saw on the Narzo 50i Prime. The smartphone also comes with a side-mounted fingerprint scanner which is surprisingly good at this price (₹7,499), not many smartphones come with a fingerprint scanner in the entry-level segment.

On the backside, you can see a single camera and an embossed realme logo at the bottom. The realme C30s uses a polycarbonate body, it looks good and has quite a good build. It comes in two color variants – Stripe Blue, and Stripe Black, we got the Stripe Blue color variant as you can see in the images below.

The front side has a 6.5-inch IPS display with an HD+ resolution (1600 x 720 pixels) and uses a standard 60 Hz refresh rate. The front side also has a notch that holds a selfie camera of 5 MP and dual cameras on the back. You will find a side-mounted fingerprint scanner embedded on the power button for securing the phone.

Moving to the sides, the right side has volume buttons and a power button that doubles as a fingerprint scanner. The bottom side has the older micro USB port and not the modern Type-C port, a 3.5 mm audio jack, a microphone, and loudspeakers with support for Dirac 3.0 sound. On the left side, you will see a triple slot SIM tray with dual slots for 4G SIM cards and a dedicated microSD card slot storage expansion up to 1 TB.

You get a 5,000 mAh battery with standard charging (10W – 5V/2A) which is quite slow, however, this is an entry-level smartphone, hence you don’t expect much from it. If you go a little higher price, you may get fast charging options in some phones – 18W, 33W depending on the option you choose.

The realme C30s equips an entry-level octa-core CPU from Unisoc, this is a 1.6 GHz octa-core Cortex-A55 processor and the chipset is Unisoc SC9863A/Unisoc SC9863A1 (mentioned on Flipkart) while the CPU-Z says it has a PowerVR Rogue GE8322 GPU for gaming, graphics apps, and tasks. The realme C30s comes in two variants, 3 GB RAM and 32 GB storage as the base variant and the top variant which is 4 GB RAM and 64 GB storage, the storage can be expanded via a microSD card on both variants up to 1 TB.

On the performance side, expect performance to be suitable for basic use, it’s an octa-core CPU, so you will be able to use it for calling, messaging, video streaming, lite gaming, listening to music, and so on, but don’t expect anything better as it’s a weak processor, some minor lags are seen while using the phone. The phone is powered by the lite version of Android i.e. Go Edition.

About the software, the realme C30s runs on the latest Android 12 operating system (Go Edition) with realme UI version Go Edition on top, a customized interface from realme with a security patch dated 5th July 2022. You can see a bunch of apps pre-installed on the phone, and some useful features like Ultra Saving Mode for longer battery life.

We took some camera shots from its 8 MP camera to see how is the quality of its camera, take a look at the samples below. The realme C30s is an affordable entry-level smartphone from realme and comes with a good design, slim form factor (8.5mm), a fingerprint scanner, an octa-core CPU, and a large 5,000 mAh battery at a price of ₹7,499. The realme C30s is a good entry-level smartphone in this range and can be considered if you have a low budget for Android smartphones. The smartphone is powered by Android Go Edition which is designed for budget smartphones with low-end hardware. If you want the full Android version and not the Go Edition, you can choose other options with the same on a slightly higher budget.