After the launch of its realme GT2 Pro, realme India has released another GT Series smartphone, the realme GT Neo 3 which is the third generation of its GT Neo Series and is the successor to the last year’s realme GT NEO 2. The smartphone is powered by MediaTek’s new Dimensity 8100 5G and boasts a whopping 150W UltraDart fast charging which is currently the fastest charging smartphone in the country. Some quick highlights of the realme GT Neo 3 aside from its fast charging are its 6.7-inch 120 Hz AMOLED display, octa-core Dimensity 8100 5G SoC, 50 MP IMX766 OIS camera, and packs up to a massive 12 GB RAM and 256 GB storage. Here’s our realme GT Neo 3 review showing you the design, cameras, performance, gaming, and battery life. 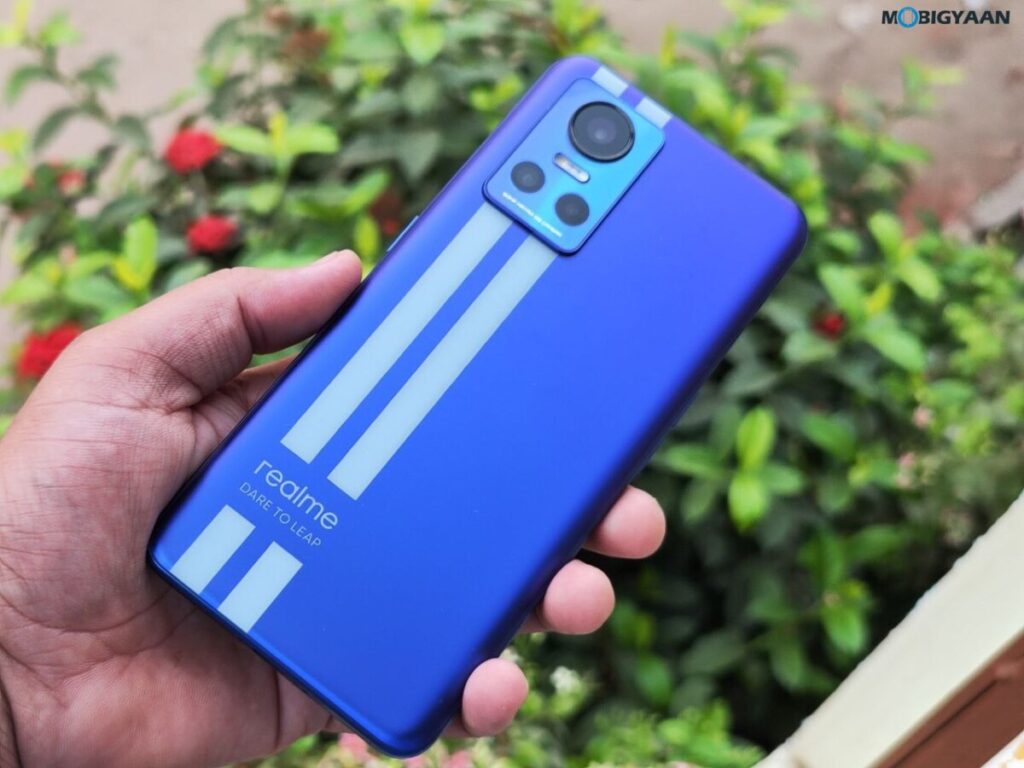 The realme GT Neo 3 is the successor to the realme GT NEO 2, the one we saw last year, and we can see the difference in the display quality, the processor which is now from MediaTek, a new OIS camera, and 80W fast charging (versus 65W charging). However, there’s a slight change in the design, the back uses a Racing Stripe Design, the rear cameras have been changed and so has the front.

The realme GT Neo 3 comes in three color variants – Nitro Blue, Asphalt Black, and Sprint White. While it comes in two separate models – one with faster charging 150W and another of 80W which you can pick from.

The realme GT Neo 3 uses a 6.7-inch AMOLED display with 10-bit depth (1B colors), Full HD+ resolution (2,412 x 1,080 pixels), and a 120 Hz refresh rate. The display quality has been changed since the previous generation. You now have the 1B-color display that gives overall better picture quality compared to a 16M-color display.

Other features of the display include a 100% DCI-P3 color gamut, a 5,000,000:1 contrast ratio, and the display is protected by Corning Gorilla Glass 5 on top. You will find an in-display fingerprint scanner that also supports heart rate testing. You can already see the triple camera on the rear side which supports OIS while the front has an in-screen selfie camera that offers 16 MP.

The tray supports a dual 5G SIM with dual standby, no microSD slot is available on the phone. You also have to get a USB Type-C to 3.5 mm adapter separately so that you can plug in any 3.5 mm earphones/headphones on this phone.

Just like its high-end sibling, the realme GT2 Pro, you will find realme UI 3.0 on the realme GT Neo 3 and it’s based on the Android 12 operating system. The realme UI 3.0 was released last year and a number of realme smartphones have received the update, the new realme UI 3.0 is loaded with features.

The realme GT Neo 3 has the latest Android 12 with a security patch dated 5th March 2022. You can also see Android 12, Processor, and also the RAM expansion tech in the about section where you can choose the RAM size to expand over its dedicated RAM.

The realme UI 3.0 feels light and smooth, do note that the 120 Hz display aids in a smoother experience, the realme UI 3.0 has been seamlessly optimized for Android 12 and it’s improved over its past versions. The realme UI 3.0 brings a new look and new Fluid Space design, UI personalization, smoother animations, custom Always-On Display, new privacy features, and more.

Some features you can see are its Sketchpad AOD (Always On Display) for a customized lock screen experience, Smart Theming with Wallpaper Coloring based on the current theme, Floating Window 2.0 which aids in better multitasking, and Privacy & Safety Features to take control over your data and apps conveniently. Take a look at some of the top features of the realme UI 3.0.

About the apps that came with this phone, you will find bloatware that can be removed. A handful of third-party apps can be seen such as Facebook, Josh, Dailyhunt, Booking.com, Moj, Snapchat, LinkedIn, PhonePe, Amazon, and a few more including apps from realme.

About the hardware, the realme GT Neo 3 offers a new CPU from MediaTek, the Dimensity 8100 5G is a flagship SoC as we can see, the CPU-Z shows you the summary of the processor. The second-generation NEO 2 phone has a Qualcomm Snapdragon 870 SoC instead which is a slight upgrade to its flagship Snapdragon 865 SoC.

The MediaTek Dimensity 8100 5G is clocked at 2.85 GHz along with Mali-T610 MC6 (6-core) GPU for smooth gaming. The CPU is among the main highlights of the smartphone after its 150W as well as 80W fast charging. The performance seems faster than its predecessor and appears to be similar to the Snapdragon 888. The Dimensity 8100 is also one of the most power-efficient premium chipsets in the segment leaving behind the Snapdragon 870 and Snapdragon 888.

For gaming, it packs the Mali-T610 MC6 GPU which is a 6-core GPU and is best suited for gamers. The gaming performance is great, it handles games very smoothly and lag-free, even at max graphics settings. Some games we have tested are Battlegrounds Mobile India, Call Of Duty, Asphalt 9 Legends, and others.

The smartphone is aided by its Stainless Steel Vapour Cooling System which helps in cooling the phone while you game on it or when the CPU is under load. You will also find RAM expansion technology that helps you increase the RAM to an extra 7 GB making a total of 19 GB of RAM on the phone (12 GB RAM variant).

Speaking of the RAM and storage options, the realme GT Neo 3 has a fast LPDDR5 RAM type and UFS 3.1 storage type. About the variants, you will find two RAM variants i.e. 8 GB RAM and 12 GB RAM while the storage on the phone is 128 GB and 256 GB. You can’t expand the storage via a microSD card slot due to the missing microSD card support.

A total of three variants of the phone are available, the 12 GB + 256 GB variant being the top end featuring a 150W fast charging, while the 8 GB RAM and 128 GB storage, and 8 GB RAM and 256 GB storage are the remaining two. The realme GT Neo 3 comes in three color variants – Nitro Blue, Asphalt Black, and Sprint White. Two separate models are available, one with a faster 150W charging option and another with 80W charging.

The realme GT Neo 3 has a triple camera setup on the backside and now it has OIS support and a new camera compared to its predecessor. The main camera is 50 MP using the Sony IMX766 sensor and supports OIS (Optical Image Stabilization) while the other two cameras are 8 MP ultra-wide and 2 MP macro. The front side has a 16 MP camera for selfie needs and video calling.

The camera app supports 2x zoom, 0.6x (wide-angle), and 20x maximum zoom, you can take ultra macro shots, and portraits, as well as Slo-mo videos of 1080p@240 fps, and also record 4K videos at 60 fps. The camera performs extremely well in our usage, in fact, we got some surprisingly amazing shots, take a look at some camera samples we have shared below. The main camera has been revamped from its predecessor and it seems the quality has been improved.

Not 120W, but its 150W UltraDart fast charging is super fast and currently the fastest charging available in India. This phone can be charged fully 50% in just 12 minutes via its 80W charger whereas the 150W charger takes just 5 minutes to charge 50% and probably 12-13 minutes to completely charge the phone. The charging speed is even faster than its flagship sibling realme GT2 Pro which offers a 65W SuperDart charging.

The realme GT Neo 3 offers a massive 150W UltraDart fast charging, and a fast flagship-grade performance which attracts many gamers out there. The new 120 Hz display with 1B colors is amazing, it offers better picture quality as compared to its predecessor. The 50 MP main camera supports OIS and takes far better shots due to its hardware stabilization. You also have the realme UI 3.0 features, RAM expansion tech, and stereo speakers, which makes the smartphone overall good value for money. The realme GT Neo 3 powerful performer and is a good pick for its price.