At the beginning of the year, S Mobility Limited or Spice Mobile as it is popularly known launched the 4.5-inch smartphone called the Spice Stellar Virtuoso Mi-495 and we thought of reviewing the device for our beloved readers and the Android 4.0 Ice Cream Sandwich running device does go on to impress. 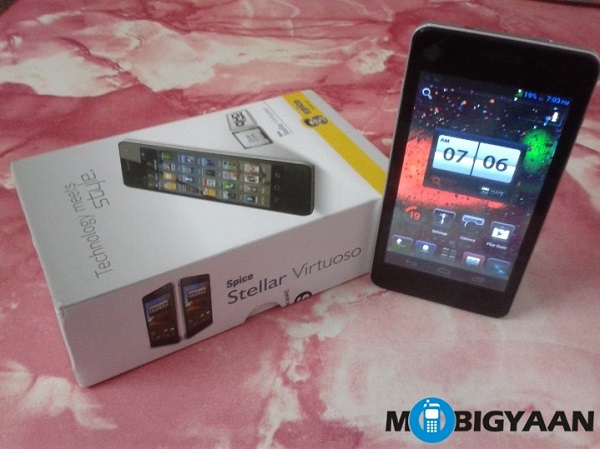 The Spice Stellar Virtuoso is priced at Rs.12,499 but is available for around 2 grands lesser in the market and is a decent buy. If you have been using a 3-4-inch smartphone, then the Spice Stellar Virtuoso might seem to be large device to you but as time passes by, you would start liking the smartphone. The device’s body is made up of aluminium and the backpanel is of thin plastic which can act as a fingerprint magnet a few times. The smartphone is sleek at 134 x 68 x 9.4 mm and weighs about 150 grams. The screen of the Stellar Virtuoso measures 4.5-inch diagonally and the TFT LCD display is bright and offers a great visibility even under sunny conditions. On the front, you will find the earpiece and the proximity and ambient light sensors are placed next to it coupled with the front facing camera. There are no physical buttons on the face of the device and the three capacitive buttons i.e Back, Home and can be found just under the display. On the right side of the device, you can fine the Lock/Unlock/Poweroff-on button and on the left of the device, we have the volume rockers. Sadly there is no dedicated camera launcher button on the device which is minus for the device. On the bottom, we can find the microphone while on the top Spice has placed the microUSB port and the 3.5mm headphone jack. The rear of the device houses the 8 MP Autofocus camera with LED Flash. Virtuoso arrives with removable back panel made of plastic which is thin and under it lies the 1700 mAh removable battery and two-SIM slots and the microSD slot. The Spice Stellar Virtuoso comes loaded with an 8 MP Autofocus Camera with LED Flash which performs decently and will go on to fulfil all your basic photography needs. We would say that the camera is not the best we have seen but not that bad either. There are times when the images come out with little noise and are kind of grainly which can be noticed easily but we can ignore them. Overall the image quality is decent and the images taken at full zoom turn out well too. Check out the sample images below. Going by the connectivity options that the Stellar Virtuoso arrives with, Spice has packed in dual-SIM (GSM+GSM) dual-standby capability with a master 2G/3G Master SIM slot while the second is a slave 2G-only SIM Slot. The Vituoso offers GSM, GPRS, EDGE, 3G with HSPA connectivities while also having Wi-Fi, Bluetooth v4.0, microUSB v2.0, 3.5mm jack and Integrated GPS connectivity.

All the options of connectivity are available in the notification bar which makes activation and deactivation easier. The 2G and 3G work well on the device and we did not have any issues with them. Spice Stellar Virtuoso runs on Android 4.0.4 OS out-of-the-box which is a setback considering that the Android OS has reached Android 4.2 Jelly Bean. Spice has equipped the Virtuoso with custom icons but then, it runs stock Android. The OS ran well on the device and there was never a lag in it and we never faced any issue while using it.

The Spice Stellar Virtuoso runs smooth and is powered by a 1 GHz dual-core MediaTek MT6577 processor coupled with the PowerVR SGX 531 GPU and 512 MB of RAM. The low RAM can be a issue when you have multiple tasks running but the dual-core processor semms to have been compesating it with almost no lags. We tried the Temple Run 2 on the device and faced no issues with the performance. Overall, the Virtuoso does perform.

Spice has included a 1700 mAh battery in the package which runs the Virtuoso and if you use 3G connectivity, the maximum backup you can expect for the device is of about 3.5 hours but on a normal usage on the 2G connectivity with a decent number of calls, SMS, web-surfing and other errands, the device lasts for about 13 hours which should be enough to pull you through the day.

At about Rs.10,500 the Spice Stellar Virtuoso is an impressive smartphone and the built quality is excellent. The smartphone performs and we can surely say, is worth every penny spent. There are times when buyers think that, being an Indian brand, the smartphones offered by Spice might not be up to the mark and might have them run to the service centres every now and then, but we feel that the Stellar Virtuoso is not one of them and is here to change the perception.

Samsung gets honored at the GSMA awards ceremony