Samsung unveiled the new A series in India debuting the two phones, Galaxy A30, and the Galaxy A50. The Galaxy A50 is the upper midrange smartphone featuring triple cameras, an on-screen fingerprint scanner, Super AMOLED Infinity-U display, and a slim glass finish design. Let’s look into the full review of the Samsung Galaxy A50. 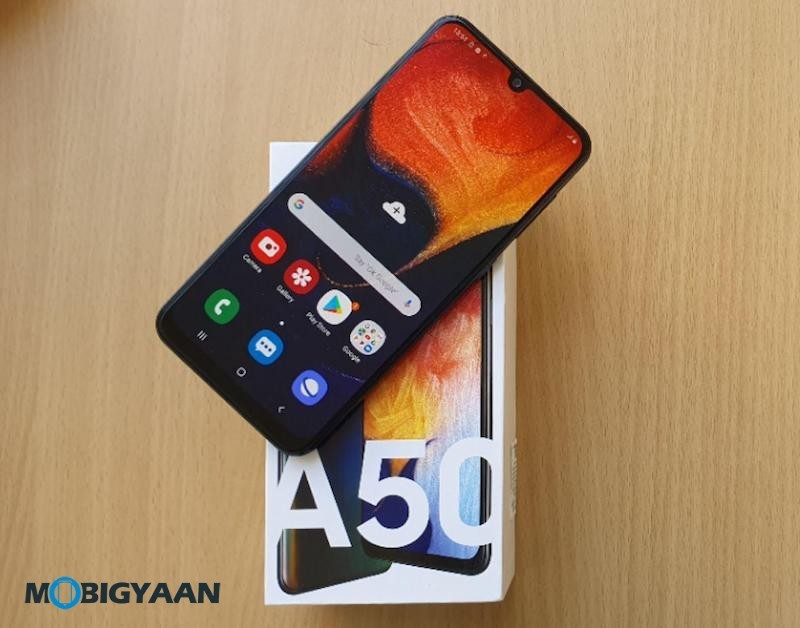 Here’s the unboxing video of the Samsung Galaxy A50 showing the box contents of the phone.

The main highlight you can see on the phone is the gorgeous 6.4-inch display which is nothing but the Super AMOLED that you’ve seen in the high-end phones. It has an Infinity-U screen meaning smaller shaped U notch to give you a full-screen experience with over 91.6% of screen-to-body ratio.

The back of the phone shines out loud, thanks to the glass finish design. The colors, as you can see in the image, has a rainbow-like effect when light falls on it. The design is light in weight despite being carrying a large 4,000 mAh battery and the corners and the edges are curved to for a comfortable hold.

Another major highlight is the on-screen fingerprint scanner that works when you put your thumb or finger on the screen where the area glows unlock the phone.

The phone rocks a triple camera set up at the back which includes 25 MP + 8 MP + 5 MP cameras making it a camera-centric phone in the midrange segment. The front has another 25 MP sensor for selfie needs, however, no dedicated LED flash has been provided due to the smaller notch design. The bottom offers a USB Type-C port alongwith loudspeakers, a 3.5 mm audio jack, and a microphone. The top has another noise cancellation microphone while the right side has the usual power and volume keys. The left side holds a triple slot SIM tray that carries a separate microSD card slot, both the slots support 4G SIM card and dual VoLTE. The Samsung Galaxy A50 features a 6.4-inch screen with a resolution of Full HD+ (2340 x 1080 pixels) and offers a Super AMOLED panel. If there’s something really interesting about the phone then it’s the display, the gorgeous Super AMOLED display is nonetheless superior and can easily defeat any phone in this segment with the display quality. The viewing angles are very good, the brightness is sufficient, the content looks crisp on the screen.

For the notch at the top, it can be removed with the help of a quick setting in the display which adds a black bar around to look like there’s no notch on the phone. Other display features include the Blue Light mode, Night mode, Full screen apps, and so on. 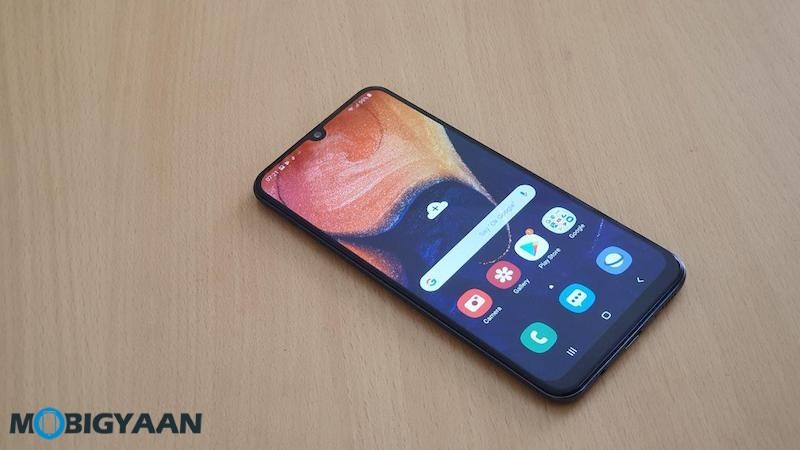 Samsung has moved to the newer interface called the OneUI which is a customized Android interface and it’s a lot cleaner than the previous one. Although the icons are bigger, the UI looks pretty much easy to use and it’s based on the Android 9 Pie, the latest Android as of now.

Since this is the new UI, we can’t say this to be the best interface, but it has a lot been improved. So far, we haven’t encountered any major bugs with the new UI. You’ll see less likely to have bloatware on the phone, there’s a bunch of Samsung apps including the Browser, Amazon, Daily Hunt, and a few more from Microsoft and Samsung. Also added in the Galaxy A50 is a feature that shows you stories on the lock screen, this feature is powered by Glance. It gives its users a unique and novel experience of seeing exciting content on the lockscreen without the need for an app. Every piece of content is visually appealing and comes with a story headline with wallpaper in the background. To view stories, tap and hold on the story and swipe to the bottom. The content opens up a video most of the time, making it easy to consume.

Content in Glance is organized by a total of 19 different categories including travel, food, news, sports, wildlife, and entertainment. There are polls and games as well to kill the boredom. You can choose topics, languages – Hindi and Tamil, while English is default, and even images from your Gallery to personalize your lock screen further. Despite the high quality content that is refreshed regularly, Glance is quite light on power and doesn’t seem to make any noticeable impact on battery life.

Glance brings simplicity to content consumption in a world saturated with apps. Since content is readily available on the lock screen, you always have interesting content coming your way through the day.

To change the categories, go to the Settings -> Lock screen -> Lock Screen Stories and customize the Follow categories.

Speaking of the specifications, the Galaxy A50 sports a more powerful Exynos 9610 octa-core SoC manufactured in 10nm process and clocked at 2.3 GHz. The Galaxy A50 falls on the higher end of the spectrum when compared to the Galaxy A30. You get up to 6 GB RAM in its top variant with 64 GB internal storage that expands up to 512 GB via microSD. The Exynos 9610 chip is as powerful as the Snapdragon 660 or maybe even slightly better due to its 10nm process and higher clock speed, however, as per the benchmarks, there’s not a huge difference in the numbers, very much identical. Gaming won’t be a problem for many, the phone has enough power to play demanding games like PUBG Mobile, Asphalt 9: Legends, and similar ones. Note that, the games will run on medium-high settings with the Mali-G72 MP3, Adreno 612 might be slightly better in terms of performance.

The phone doesn’t heat on load, the phone remains cool on load, thanks to the 10nm chip.

Needless to say, the back has a triple camera set up having three lenses one of them consisting of an 8 MP wide-angle lens and another 5 MP for the depth measuring whilst the 25 MP remains the main lens for shooting. There are a total of three cameras, 25 MP + 8 MP + 5 MP with an LED flash of course.

Take a look at these camera samples we took from the Samsung Galaxy A50 cameras. 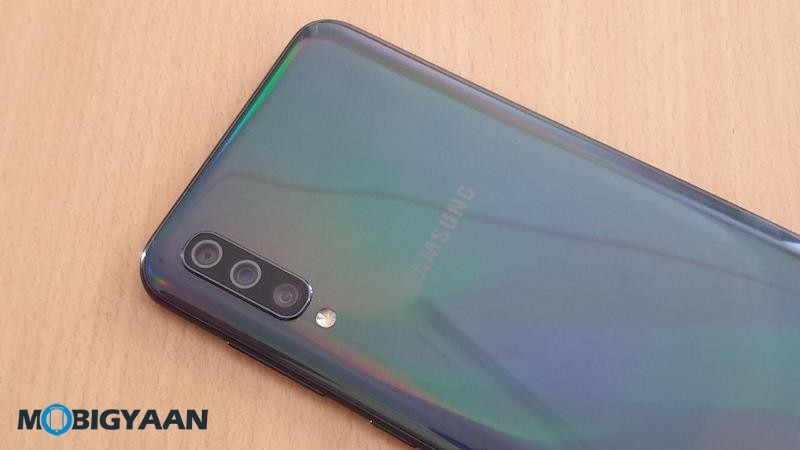 Despite carrying a slim design, Samsung has put a large 4,000 mAh battery into the phone that should give you enough power to get over a day’s worth of use. The phone gave us a 2-day battery backup on average use with 4 hours screen-on-time and should be running about 1.5 days on below moderate.

It uses 15W charger i.e. 9V and 1.67A ratings that helps the battery to charge fully in about 100 minutes. Charging isn’t as fast as we saw on the OnePlus, HUAWEI, and OPPO phones, but it’s close to the one offered in Samsung’s flagships. Moving to the verdict, this is yet Samsung’s best smartphone in this segment that offers value. It has an on-screen fingerprint scanner, gorgeous AMOLED display, and an impressive design that makes it a worthy challenger. The Samsung Galaxy A50 is a recommended buy if you are looking for a midrange phone with an all-rounder package.