Samsung has launched Galaxy C7 Pro in India at a price of ₹27,990. Samsung’s new Galaxy C lineup is focused on the midrange market. With now smartphones offering top notch features at the sub-25K price bracket, Samsung came up with a 5.7-inch premium grade smartphone that packs a punch. Let’s see what the Samsung Galaxy C7 Pro has to offer. 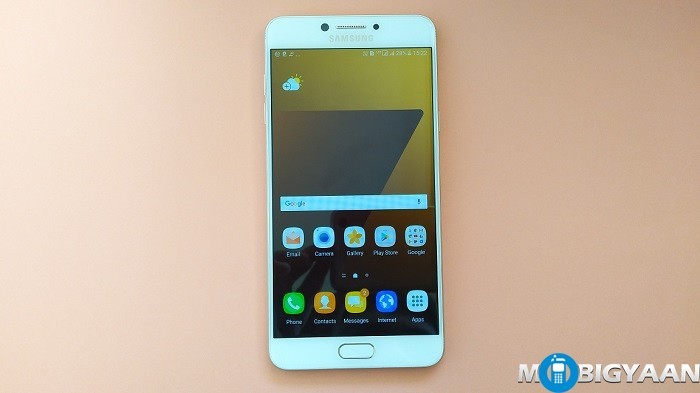 What is impressive about the Samsung Galaxy C7 Pro is its slim design (7 mm) which looks appealing and the 16 MP camera duos. Its 5.7-inch Full HD Super AMOLED display provides an immersive and enriching viewing experience. I usually pick AMOLED displays over IPS and no doubt Samsung is great at making a quality display.

Just like its bigger sibling Samsung Galaxy C9 Pro, the Galaxy C7 Pro shares the same design language. Despite its slim profile, Galaxy C7 Pro managed to fit a 3,300 mAh battery in it. It boasts a sleek metallic unibody with 2.5D curved glass on top. After all these, it just feels light in 172 grams albeit there are smartphones which are lighter than Galaxy C7 Pro.

Moving to the hardware and specifications, the Galaxy C7 Pro doesn’t disappoint. It is equipped with a 2.2 GHz octa-core processor from Qualcomm Snapdragon 626 SoC (14 nm FinFET). This seems the improved version of the Snapdragon 625 with 10% increase in performance. Furthermore, there’s 4 GB RAM and 64 GB internal storage. The specs indicate a smooth multi-tasking performance, the C7 Pro packs a power. Samsung Galaxy C7 Pro camera sounds interesting. It features a 16 MP f/1.9 snapper on the rear side with dual-tone LED flash. Another 16 MP camera is on the front side. Both the cameras are capable of recording 1080p videos. Unfortunately, it doesn’t record 4K videos whereas there are smartphones in this price range that can capture 4K footage.

The bottom has touch sensitive keys that light up. The fingerprint scanner is mounted on the home button. One of the things I don’t prefer on smartphones is that you need to press the button then it scans your fingerprint. Like Samsung Galaxy C9 Pro, this also features a USB Type-C. The right side has a power button and a Hybrid SIM Tray. The left side has two volume buttons. The keys provide a tactile feedback.

The Galaxy C7 Pro supports 4G network with VoLTE calling. The SIM Tray holds two nano SIM cards, but you need to compromise on the external storage. You can always put the MicroSD card on SIM2 leaving it as a single SIM smartphone. It could be great if C7 Pro gave a dedicated SIM slot like its bigger sibling Galaxy C9 Pro.

It runs on Android 6.0.1 Marshmallow with TouchWiz UI on top. Samsung should offer Android 7 Nougat out of the box which would make it a perfect deal. I am not sure how does this compete with the powerhouse OnePlus 3 but Samsung is good at offline sales.

Samsung Galaxy C7 Pro is available in two color options – Navy Blue and Gold. It is priced at ₹27,990 and retails exclusively on Amazon.in.

Tell us your views about this device in the comments below.