This year, Xiaomi has launched its best Redmi ever, the Redmi Note 5 Pro, being a higher variant of the Redmi Note 5 and is the latest midrange smartphone that also enters selfie business giving competition to OPPO and Vivo contenders. Not just that, it’s even pocket-friendly starting at Rs 13,999. The key highlights include the dual 12 MP + 5 MP rear cameras with a 20 MP camera on the front side, as well as the octa-core Snapdragon 636 CPU and 6 GB RAM that sounds promising. Read our full review of the Xiaomi Remdi Note 5 Pro below. The Redmi Note 5 Pro is the successor to the Redmi Note 4 but now with pro features including dual cameras, a faster CPU, and massive 6 GB RAM, and a 20 MP selfie camera. The screen is enlarged to 5.99 inches and the bezels are compressed as compared to the predecessor.

The Redmi Note 5 Pro nearly looks the same as Redmi Note 5 from the front, the screen is the same size and the edges are rounded. The design has nothing huge changes except the back protruding dual cameras. The back easily catches attention, the vertical placement of the camera reminds you of the iPhone X. The overall build is strong, thanks to the metallic design.

The design isn’t as remarkable as the Honor 9 Lite with the glass body. Also, the large 6-inch screen and 181 grams weight is not for everyone especially those who have moved from a smaller sized phone. The bezels are smaller, but nowhere near the Xiaomi Mi MIX 2. There are no capacitive touch keys instead utilizes the on-screen navigation buttons.

But why micro USB port, it’s time Xiaomi should opt out the micro USB port and offer a type-C USB. The bottom has loudspeakers and a 3.5 mm jack. The top side has IR Blaster while the microphones remain to be at the top and at the bottom.

The left side offers a hybrid SIM tray supporting one 4G SIM at a time, the other slot will change to 3G. If you are using on Jio SIM card in both slots, only one SIM will work due to the 4G-only network. The SIM2 can be replaced with microSD card for storage expansion.

The Redmi Note 5 Pro offers a large 5.99-inch screen with 18:9 aspect ratio and least screen bezels. This is the newer design which is currently trending in the smartphone market.

The screen uses a Full HD+ resolution (2160 x 1080 pixels) which is higher than many phones in the given price range. Higher resolution means the screen can offer crisp and sharp content. On top of it is a Corning Gorilla Glass (unspecified version) that protects from scratches.

We didn’t find anything wrong with the display, it is just good for the price. The display seems to be the same used on the Redmi Note 5, hence there’s nothing much to talk in the display segment. The display is bright and offers good viewing angles. On the software front, this is where people might get disappointed, it still relies on Android Nougat, not the new Oreo. Competitors have started moving to the newer Android while the Redmi Note 5 Pro is based on the old Android Nougat features. Even though the MIUI 9 is far better in terms of customization and features, but it misses out the Oreo features. The interface continues to be the same as you see on the MIUI 9 based Xiaomi phones.

What’s added new is the Face Unlock which unlocks the phone via facial recognition. The Face Unlock is popular among iPhone X and other flagships, however, don’t expect it to be as fast as those having. The Face Unlock is good for the given price, it’s neither too fast nor too slow. It takes a time or won’t work in darker areas while it works well in the bright daylight. The Redmi Note 5 Pro is the world’s first smartphone to equip a Qualcomm Snapdragon 636 SoC. The latest Snapdragon 636 chip is faster than that of the current midrange phones in the market. It carries eight Kryo 260 cores clocked at maximum 1.8 GHz and an Adreno 509 GPU for gaming. The chip is based on a 14nm FinFet technology meaning it is power efficient and draws less battery power.

Moreover, the RAM has bumped to 6 GB and being the only phone in the whole Redmi series to offer as much RAM. Also to note that the memory type is LPDDR4X type memory used on many flagship smartphones. The CPU-Z installed on the phone displays incorrect information which will be resolved in the future CPU-Z app updates.

Benchmarks indicate that the Snapdragon 636 is faster than many midrange SoCs out there, it’s better than Snapdragon 625, Snapdragon 626, Snapdragon 450 and others similar. It is also a tad better than the Huawei’s Kirin 659 SoC found on Honor 9 Lite, Honor 7X, and Honor 9i. Hence, the Redmi Note 5 Pro conquers the midrange competition. There’s no problem playing games at all, the Redmi Note 5 Pro takes on gaming. The performance of the Adreno 509 GPU is somewhat similar to the Adreno 510, hence medium to heavy gaming is possible on the Redmi Note 5 and comes out at least better than the phones having Mali-T830 MP2, Adreno 506, and Adreno 508.

On the storage front, the Redmi Note 5 ships with 64 GB only variant for India followed by a microSD support on the SIM2 slot.

The storage type is an eMMC 5.1 means it’s not as fast as the UFS found on the flagships, but at least holds itself in the competition where most of the phones are stuck with the cheaper eMMC type storage in the segment.

The storage and RAM performance is reliable just as what the other phones offer in this range. We have no complaints in the storage and memory department. Take a look at the results below. This is the first Redmi smartphone that comes with dual cameras. The Redmi Note 5 Pro hooks up dual cameras at the back one of 12 MP and another of 5 MP camera, hence you’ll see a Portrait mode that adds bokeh effect to the photos. The same applies to the front single 20 MP camera. If you love taking Portraits, then the Redmi Note 5 Pro leaves nothing to be desired. 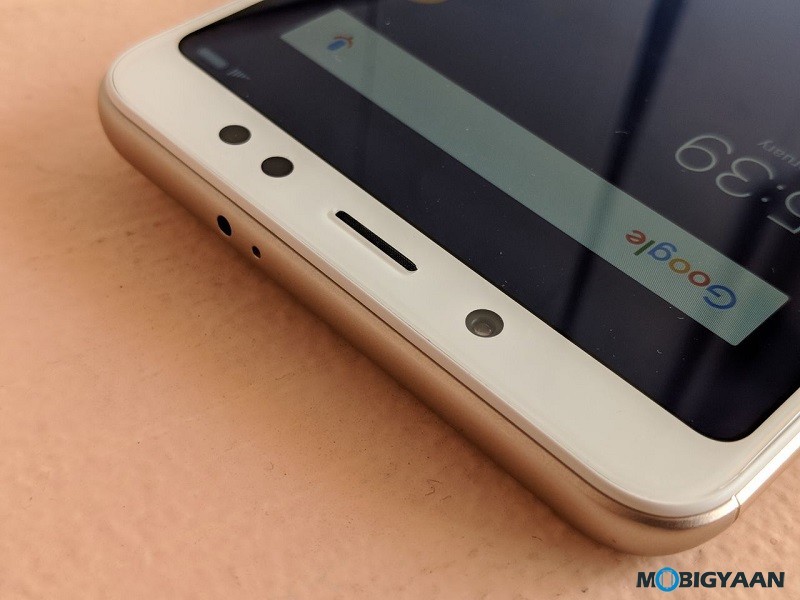 The camera interface has a few options that you’ve seen on most MIUI-enabled phones, the added modes are the Portrait and Short Video. Also added is the Beautify 4.0 AI that enhances the selfies using its deep learning algorithm mainly optimized for Indian environment. No AR stickers or further camera modes provided due to which Honor smartphones take the lead.

Not only the dual cameras, the front 20 MP camera takes over the selfie market in the midrange segment dominated by none other than the OPPO and Vivo smartphones. The 20 MP front camera is a tough competitor. The Redmi Note 5 Pro snaps mind-boggling selfies which meet the selfie demand. The LED flash on the front comes into action when you’re in low-light scenes. No wonder this is the best selfie camera phone you can get at this price as of now.

Talking about the dual camera performance, the results are quite decent. The Portraits turn out to be a tad better than several dual camera smartphones since the edge detection is very precise. When there is enough lighting, it performs well, and even good in the low-light scenarios, however, not the best. Honor smartphones, on the other hand, are far better in terms of low-light photography. Anyways, take a look at the Redmi Note 5 Pro camera samples below. The all-new 14nm Snapdragon 636 CPU is surprisingly a battery saver, thanks to the power saving cores, the battery on the Redmi Note 5 Pro performs well lasting up to 2 days on normal usage. Even for power users who frequently use the phone, the Redmi Note 5 Pro survives the day. We liked the battery performance of the phone, the 4,000 mAh battery is one of the standout aspects of it.

The problem lies in the fast charging, the Redmi Note 5 Pro still needs better charging options. Since phones like OnePlus 5T are super fast in charging, the Xiaomi should at least provide a fast 9V or 12V charger with fast charging technology enabled on the phone. The Redmi Note 5 Pro is worth every penny if you take all the things into the consideration. There are almost no other smartphones at this price that offer what Redmi Note 5 Pro has to, take the dual camera package and the 20 MP selfie camera or the Snapdragon 636, 6 GB RAM patched with a huge 4,000 mAh battery to run all day.

Planning to upgrade your Redmi Note 4? The Redmi Note 5 Pro would be our recommendation. If you have a budget of Rs15,000, want a large display, better camera package, fast performance, and a great battery life, Redmi Note 5 Pro is the phone you need.

For people who fancy Android Oreo, you can wait for Oreo update to be aired on the Redmi Note 5 Pro. Although there are rivals like Honor 9 Lite with Oreo out-of-the-box, those are some great alternatives and far better in design.

OnePlus 6 confirmed to come with a notch, here’s the reason

OnePlus 6 confirmed to come with a notch, here's the reason