Honor has a bunch of dual-camera smartphones, but quad cameras? After Honor 9i, the newest Honor 9 Lite smartphone featuring a glass design and Infinity display has quad-camera offerings. Highlighting the main features, there’s a total of four cameras, a FullView 5.65-inch Full HD+ display, the new EMUI 8.0 based on Android 8.0 Oreo operating system, and a glass body design that you surely fancy it. Take a look at our Honor 9 Lite review. 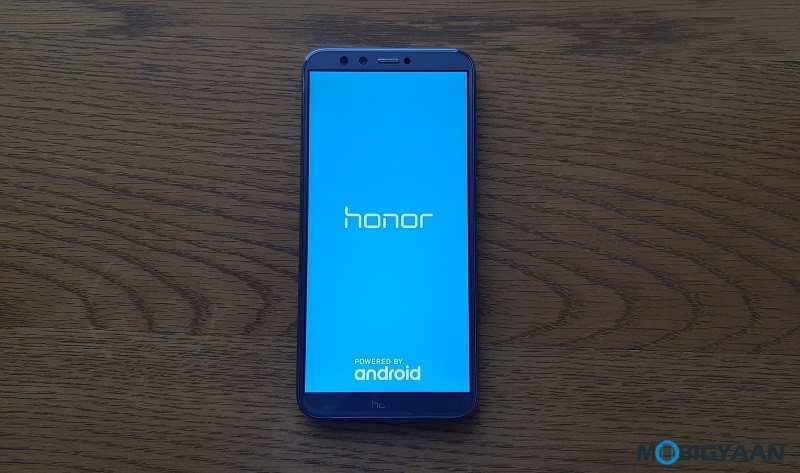 One of the first things to notice is its design, it instantly gets attention by its gorgeous glass body. On flipping the phone, the back is covered by glass with a 2.5D curve on the edges and it looks very appealing. The front side has a large display panel with minimalist bezels which states that the smartphone is from the today’s generation.

When there’s glass on the phone, it’s more likely for you to take care of the device. Not all phones are based on glass design, the midrange segment is filled with many metallic smartphones eventually having an edge over the Honor 9 Lite due to its plastic frames. But, plastic also removes a few grams of weight, the Honor 9 Lite feels lighter (149 grams) than some metallic phones.

The front and the back both have a dual-camera setup which sums up to four cameras. Both sides are aided by a secondary camera to measure the depth to capture bokeh effect shots. There are a number of camera features to play with if you want.

Moving to the sides, there’s no USB type-C port, rather a micro USB port at the bottom alongside the 3.5 mm headphones/earphones port. The SIM Tray can hold either two 4G SIM cards or a microSD card on SIM2 slot eventually making it a single SIM phone. A dedicated microSD slot would have been a great here. For the rest, there’s a power button and volume keys on the right side, no IR Blaster, and two microphones on the phone. 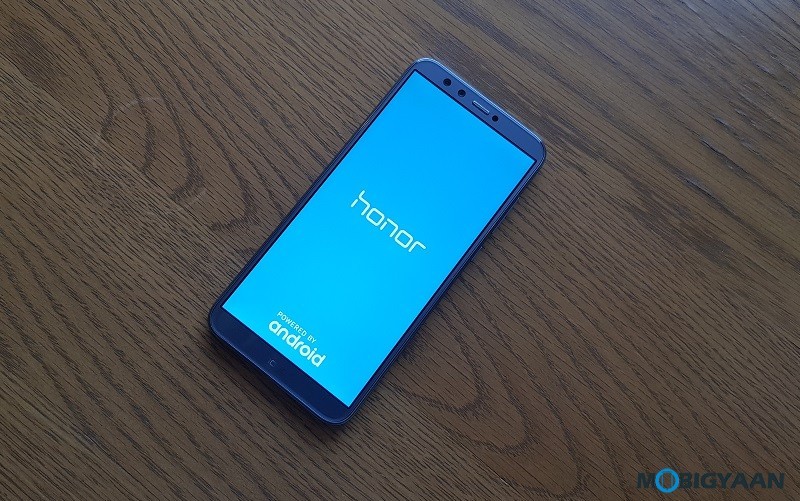 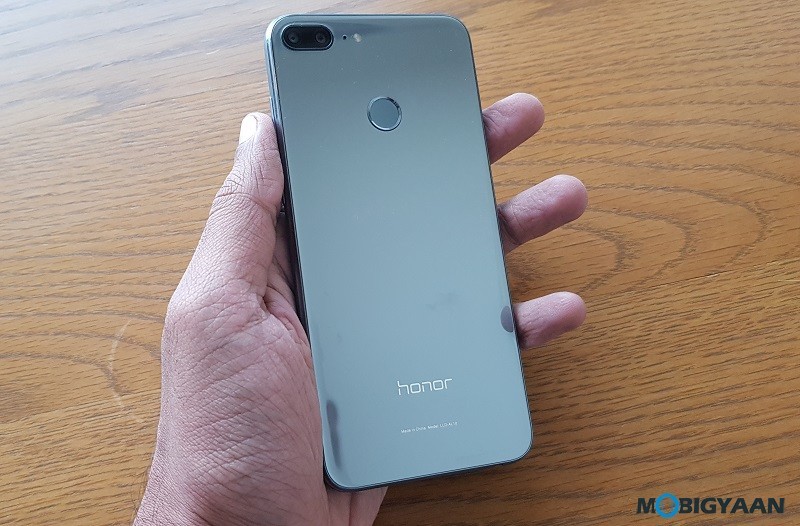 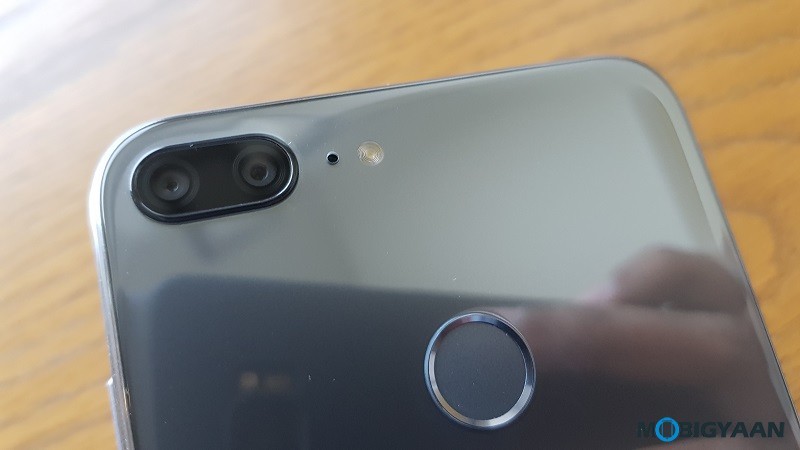 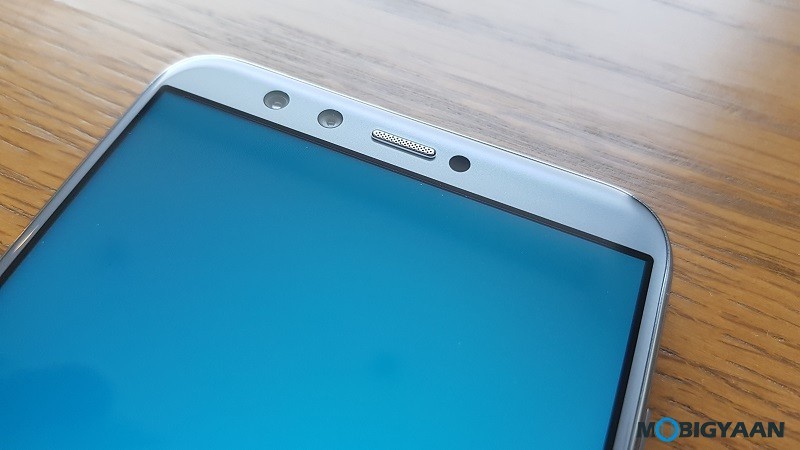 The display on the Honor 9 Lite uses a high resolution with 18:9 aspect ratio i.e. Full HD+ (2160 x 1080 pixels) higher than many phones in the price range. The display is crisp and text appears sharp due to its higher resolution. The display is reflective, hence less visibility in sunlight, but under sunlight shade is sufficient.

As you can see, the Honor 9 Lite offers some display enhancements like color temperature, eye protection, full-screen apps, screensavers, and smart resolution. Do note that some apps may not utilize the full screen since the 18:9 display aspect ratio is still new. Honor 9 Lite offers an option to stretch it to full screen, however, some may get cropped from the sides. Some features which are present on the flagship Honor View10 aren’t available on the Honor 9 Lite, such as the Private space and Face Unlock.

For the user interface, it’s now changed with new icons and themes, the Settings menu is now grouped as you can see on the Oreo-based interface. Oreo features including the notification dots are visible. Honor phones usually come with bloatware, but you have the option to remove them if you don’t want. The rest of the features are carried out from the previous EMUI versions. The homegrown chip Kirin 659 performs well and competes with the Snapdragon 625. Our benchmarks indicate that it is equivalent or slightly better than Snapdragon 625 SoC. The chip is also better optimized for its EMUI software and battery life, thus providing better user experience overall on the phone.

About the specifications, the Kirin 659 equips eight cores clocked at 2.35 GHz and paired with 3 GB RAM and 32 GB storage or 4 GB RAM and 64 GB storage (depending on the variants). These specs are just enough for a midranger and have enough power to stand against the midrange competition. For the performance of the storage and RAM, there’s nothing to complain, it has good benchmark results more likely to compete many phones in the segment, if not all. Take a look at them below. Honor has gained an expertise in the dual-camera segment, now it’s about quad cameras. The Honor 9 Lite has quad-camera offerings, two on the front and two on the back highlighting it as one of the main features of the phone.

The front camera features 13 MP + 2 MP dual cameras with hardware-level bokeh effects and there’s another dual-camera setup on the back having 13 MP + 2 MP. The additional 2 MP cameras have depth measuring capabilities.

The Honor 9 Lite is good at taking portraits, the depth mode works like it should, it adjusts the depth later. The colors are vibrant and the details are visible. The low light photos aren’t bad after all, Honor has optimized the camera app considerably.

For selfies, this is the phone you might be looking, it won’t disappoint you in any way. The dual-selfie-camera is brilliant, it snaps stunning portraits and adds bokeh effects to the photos. The overall camera package is the best you can get at this price.

If there’s something exciting about this phone other than the looks and the large display is the battery performance. Honor 9 Lite has one of the best battery backup so far in the midrange segment. It runs easily throughout the day with some battery left when used extensively. It runs 2 days straight without charging on average use. Our usage is based on single SIM with 4G enabled.

The battery charging isn’t surprising, the phone takes time to charge, unlike the phones that offer fast charging and charges in 90 or 100 minutes.

For the price of ₹10,999, Honor 9 Lite has plenty of things to offer – glass design, large display, quad cameras (dual rear and dual selfie cameras), and Android Oreo out-of-the-box. It’s impressive 18:9 display turns out to the crispier with the full HD+ resolution. It’s slim, lightweight, and the glass at the back feels rich. The battery lasts longer than you think. Honor 9 Lite has all that it got, there isn’t any better consideration when it comes to overall value, it satisfies the needs within the price bracket. The Honor 9 Lite is advised if you are looking for more features in affordable segment.