China-based smartphone manufacturer Coolpad is all set to launch a new upper mid-range smartphone named Coolpad N10 Pro. The smartphone’s banner was seen on the company’s official website, giving us an early look at the phone’s design. 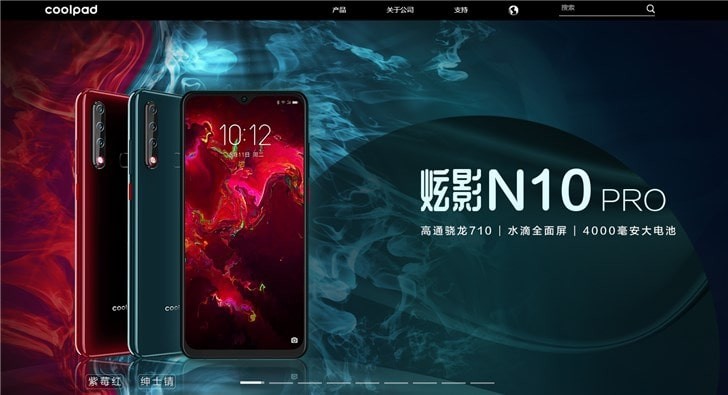 The Coolpad N10 Pro will come with a waterdrop notch display having thin bezels on the sides and top, and a bit thicker bezels on the bottom side. On the back side, there’s a triple camera setup in the top-left corner, with the sensors stacked vertically.

Along with the phone’s design, the banner image also revealed some of the phone’s key specifications. It confirms that the device will be powered by the Qualcomm Snapdragon 710 octa-core processor and will drive power from a 4000 mAh battery.

As for the software department, the phone will be running Android 9 Pie operating system out of the box, with a layer of the company’s own COOL UI on top. Apart from this, nothing much is known about this upcoming smartphone.

It remains to be seen how the company prices this upper mid-range smartphone, which will first debut in the Chinese market. When launched, the smartphone will be up against devices like Realme X and Oppo K3, which packs interesting specs and comes with aggressive pricing.

The most recent smartphone from Coolpad in the Indian market is Cool 3, launched in February this year. Priced at Rs. 5,999, it was the cheapest smartphone running Android 9 Pie operating system at the time of launch.

Samsung Galaxy A80 to reportedly launch in India on 15th June for a starting price of Rs. 39,990