This year, we have seen a chunk of innovations in the smartphone industry, the in-display fingerprint scanner, the notch-less display, the AI-based cameras, and a whole lot of other things. The HUAWEI’s Mate 20 Pro is no exception, being a top-of-the-line smartphone, it has brought a handful of unique innovations such as the world’s first 7nm CPU with dual NPUs, reverse wireless charging, nanoSD card, as well as the in-display fingerprint scanner, and Leica branded triple cameras onboard that goes up to 40 MP in numbers. Here’s all you need to know about the phone in the HUAWEI Mate 20 Pro review. 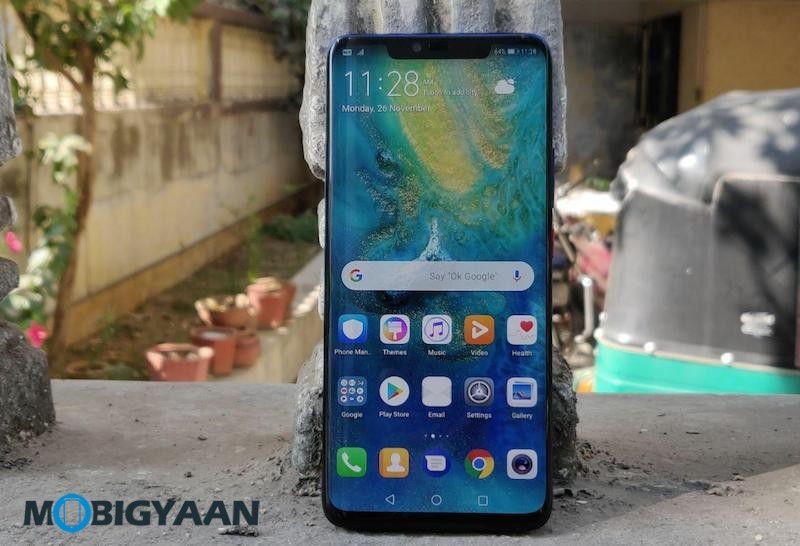 Here’s our unboxing video of the HUAWEI Mate 20 Pro in Hindi.

In terms of design, the Mate 20 Pro looks unlikely a beast, the design is quite identical to the Samsung Galaxy S9+, the back of the Mate 20 Pro uses a glass similar to the HUAWEI P20 Pro. The edges are surprisingly thin with curved edges on the display, the front and the back are covered with glass giving a premium feel.

Joon Suh Kim who is the Chief Design Officer at HUAWEI took the inspiration for the Twilight Gradient Finish from Aurora Borealis also known as the Northern Lights during the night. The back of the phone has several layers of NVCM (Non Conductive Vacuum Metalizing) optical coating underneath the glass, so any light that falls on it refracts and creates a vivid, yet a gradual change of hue.

In addition to its design, you will find a notch on the top just like the others and also the IP68 ratings on the phone meaning it’s dust and water resistant. On top of it has a wireless Qi charging support and reverse wireless charging as well which you might not have heard before.

Not just the design, the phone also packs some unique perks like the in-display fingerprint scanner, reverse wireless charging, a new 7nm Kirin 980 octa-core SoC with dual NPUs that’s supposed to be the most powerful SoC as of now. The cameras on the phone are its main highlight, the triple cameras offer a lot of features that you won’t find on any other smartphone altogether.

The in-display fingerprint scanner is underneath the display while the physical fingerprint scanner that usually found on the back of the phone is eliminated. The back has a quad-camera look-a-like housing that justifies the design, it also does not offer a hump which turns out to be fantastic for a phone with triple cameras on one side. 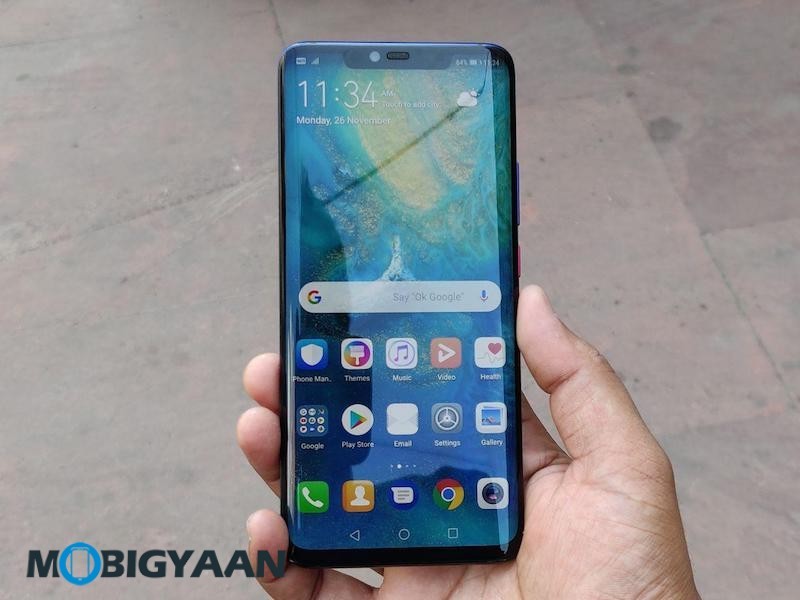 The bottom has a SIM tray that holds nano SIM slots and a nanoSD card slot. Also available are the dual microphones and a loudspeaker underneath the USB Type-C port. Do note that blocking the USB port will give you a slightly muffled sound. It comes with stereo speakers, one at the USB port and another on the earpiece.

The right side has a power button in Red, volume keys while the left side is empty. On the top, you will find an IR Blaster and another microphone. No, you don’t get a separate Bixby-like key for the quick voice Assistance and I don’t find it really useful to have a physical key for that. Anyways, make sure you’re not confused with the SIM tray opening hole and the microphone hole which sits right beside the tray.

The HUAWEI Mate 20 Pro sports a 6.39-inch curved OLED display. The screen uses an OLED panel with a resolution of Quad HD+ (3120 x 1440 pixels) and an aspect ratio of 19.5:9. Those who dislike the notch may hide it from the display settings. The display is surprisingly bright outdoors, the brightness is sufficient, viewing angles are great, the quality of the display flagship-grade and competes the Samsung Galaxy S9+.

Apart from the display quality, the display features such as the Ambient display can be useful if you want notifications at a glance. You get certain customizations in the display, disabling notch on per app basis, adjust the color temperature and night mode. Unfortunately, the curves on the sides don’t offer any extra features or edge features like the ones you found on the Samsung phones. The HUAWEI Mate 20 Pro runs the latest version of Android i.e. 9.0 Pie on top of it has an EMUI 9.0 with tons of features. This version of EMUI is a bit different from the previous iterations, but also Android itself has a number of innovations such as the Digital Wellbeing.

Everything seems to be more handy, the smooth operations add to the user experience, the EMUI is now optimized to offer a better experience. We would like to see the Edge screen shortcuts similar to what we have seen on Samsung phones, but that’s all EMUI has to offer for now. Nevertheless, the EMUI has tons of features including the Dual Apps, HiTouch, HiVIsion, and other customizations. Refer our previous HUAWEI/Honor phones’ reviews to know more about the EMUI. As far as the performance is concerned, the Kirin 980 is far better than Qualcomm Snapdragon 845 in processing power according to the benchmarks and due to the 7nm (versus the 10nm) manufacturing, the power consumption is lesser.

The predecessor Kirin 970 is marginally below the new Kirin 980. The benchmarks indicate that the performance is faster than the Kirin 970 as well as the Qualcomm Snapdragon 845, Geekbench scored significantly better than both of these. The AnTuTu could score better, the average score crosses 3,00,000 points which is surprising. For gaming, the Adreno 630 is ahead in the processing, if you are a gamer and want to play on the highest settings, the Adreno 630 still leads the game. Even though the Mali-G76 MP10 is fast enough to play any games, the overall performance of the GPU sits right below we compare to the Adreno 630.

You don’t find a 256 GB variant of the Mate 20 Pro, while the other markets offer it in 8 GB RAM with 256 GB and 512 GB as Mate 20 RS. The Mate 20 Pro comes in 128 GB internal storage variant and it can be expanded using a newer memory card standard, the nanoSD and not the microSD. Yes, this is a new slot, the nanoSD is even smaller than the microSD (similar to a nano SIM card), hence you will end up buying a new SD card since your microSD cards won’t work on it.

The performance of the storage is on top and is surprisingly faster than most phones, it exceeds the phones like Google Pixel 3 XL, Samsung Galaxy S9+, and the OnePlus 6T. Take a look at the storage speeds we got in the storage benchmarks.

Speaking of the camera set up on the HUAWEI Mate 20 Pro, it equips three rear cameras and a dual-tone LED flash making a square housing. The triple cameras are actually powered by Leica branded lens, the cameras a total of three sensors, 40 MP + 20 MP + 8 MP triple cameras on the rear side and a 24 MP selfie camera on the front side.

While this is not the first smartphone by HUAWEI to feature tri-cameras, the HUAWEI P20 Pro was the first in its class. The idea here is to make the most out the triple cameras which the HUAWEI P20 Pro missed, the camera specs on the Mate 20 Pro sound similar, however, there has been a lot refreshed with new camera additions.

The two unique features that we found on the phone’s camera are the Background Blur and the AI Color both can be applied while shooting the video. The Kirin 980 CPU hooks up with dual NPUs processing allowing you to shoot videos with a bokeh effect in the background as well as the colorless background in real-time. This is something that you have only seen on DSLRs.

The AI Color that removes the colors from the background keeping the object (or humans) in color while the Background Blur adds a bokeh in the background while keeping the object in focus. Not just these, the cameras are just loaded with features such as the 3D Live Emoji, Super Macro mode, 21:9 Cinema video, HiVision, the new Master AI that detects 1,500 scenarios in 25 categories, and a lot from the previous HUAWEI flagships including the Monochrome itself.

The photographs are definitely something that you want to look at, they don’t seem to be taken on a smartphone camera. The camera performance is surprising in the daylight, photos taken in the daylight are very bright, detailed, and the good amount of bokeh is visible (can be changed later if shot on Aperture mode).

The night camera performance is still amazing especially the Night mode, somehow the low-light shows aren’t tempting due to the post-processing, but turn out to be detailed if taken the right. If using the Night mode, you need to be in still position or at least hold it tight until it takes the shot. Only if you don’t want to wait for 15-20 seconds in extremely dark conditions, a tripod is suggested here.

The Mate 20 Pro packs a 4,200 mAh battery that delivers exceptionally excellent results. Most people will easily reach the end of the day on a full charge, the phones offer a very decent battery life if used moderately. We also got a 2-day battery life with the phone which is surprising for us to know, being a flagship, not all phones can live up longer, thanks to the Kirin 980 and EMUI optimizations. The Mate 20 Pro comes with HUAWEI’s SuperCharge fast charging and wireless Qi charging support. This could be the fastest charging phone in the world, even faster than the OnePlus DashCharge technology. The HUAWEI Mate 20 Pro can be charged fully in just ~60 minutes using the provided fast charger in the box, the charger is rated 10V and 4A i.e.e 40W charger.

Aside from the fast charging technology, another tremendous feature of the phone is the reverse wireless charging, apart from charging the Mate 20 Pro wirelessly, you also have the option to charge the other wireless-enabled charging phones by placing them on the back of the Mate 20 Pro.

The Mate 20 Pro has a groundbreaking entry in the smartphone industry bringing in the innovative features, fully featured Leica triple cameras with dual NPU processing, this is by far the most versatile camera ever seen on a smartphone. Although, the camera needs a little refinement especially in the features that are primarily highlighted, the AI Color, and the Background Blur, nevertheless, this smartphone is the first instance of it and HUAWEI should be fixing it in the next camera upgrades.

Talking about the performance and software, the Kirin 980 CPU definitely is a top-notch performer, the faster UFS storage leaves many behind in the race and the EMUI 9.0 which is based on the Android Pie update has some great things up its sleeves.

The design is beautiful, the Twilight gradient color is inspired by the Northen Lights and no wonder the display is one of the best in class. The minor disappointments in its design might be its loudspeaker location and the missing 3.5mm audio jack.

In addition to the features, the in-display fingerprint scanner, reverse wireless charging, nanoSD card slot, the HUAWEI SuperCharge fast charging (charges the battery in about 60 minutes), all of them adds to the overall package. For the price it holds, the Mate 20 Pro has the most features a smartphone could offer.