by Rupesh Sinha
in Karbonn, Reviews

The Indian smartphone makers have been rising slowly and steadily with Micromax leading the pack and the likes of Karbonn, Xolo trying hard to match Micromax’ success. Karbonn recently announced its latest Full HD display packing flagship, the Titanium X to compete with the likes of Micromax Canvas Turbo which we also reviewed. Thanks to the great folks at Karbonn, we got a Titanium X to play with and review it for you. The Karbonn Titanium X is priced at around Rs. 15,500. So, lets find out if the Titanium X is worth your hard earned money.. The Karbonn Titanium X comes in one of the standard retail boxes we have come to expect, nothing flashy here! There’s a headset, USB cable along with an A/C adapter, a USB on-the-go cable (although our review unit did not come with one), some literature to get you started with and of course the device itself. 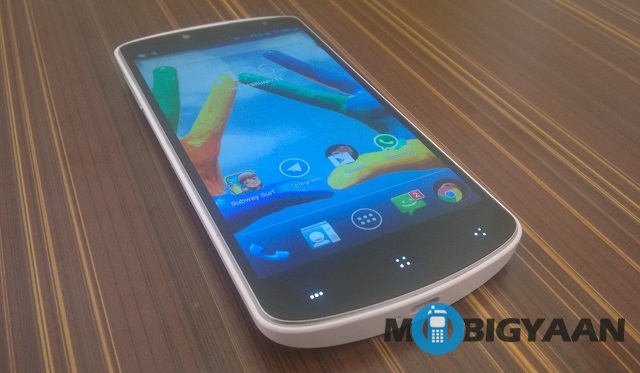 We were pleasantly surprised when we first got the Titanium X out of the retail box because frankly, we expected the device to be an unattractive piece of slab but we were proved wrong. The device looks pretty good and Karbonn seems to have given the design of the device some much needed attention although there are a few things in the design which make up room for improvements.

The front is mostly the glass with a metallic chrome on its edges. The front features the three capacitive buttons for menu, home and back down below. We can see the 5 MP front facing camera with LED flash on top along with the proximity sensor. The back is plastic but it does not feel cheap, in fact it feels sturdy enough to withstand a drop or two. On the back, we find the Karbonn branding, a 13 MP camera with dual-LED flash and a speaker down below.

The right side of the device features the power lock button and the left side has the volume rocker. We find the 3.5 mm jack and the micro-SIM slot on the top while the bottom features the micro-USB port and a noise cancellation microphone.

We have a few issues with the design of the device. The bezel and the back has been attached in a manner which makes the dust settle down between them which is irritating. The back is matte but feels a little slippery. Although, these are by no means deal breakers. Karbonn Titanium X comes with a 5-inch Full HD (1920×1080) IPS LCD display which is surprisingly pretty good and makes up for an impressive ppi of 441.The display is surely the best thing about the device. Thanks to the high resolution, the display is quite sharp and there’s no way you can tell individual pixels apart. The display looks beautiful indoors but it is very reflective, making the sunlight legibility average. Color saturation is another thing which isn’t too great. Considering everything, it’s a very beautiful display, the best at its price range and you’ll not be disappointed by it at all.

The Karbonn Titanium X comes with Android 4.2.2 Jelly Bean and there’s no word if the device will get the latest and greatest, Android 4.4 KitKat but that’s not Karbonn’s fault really as MediaTek is yet to make Android 4.4 compatible with its chipsets.

So, coming back to the software on the device. The user interface is mostly stock with little to no customizations. A few icons have been changed by Karbonn from the stock. There are some features Karbonn brings like Intelligent Answer mode, Direct call, flip to mute, Shake to answer. Karbonn has pre-installed various apps on the device. There’s Karbonn’s Karbonn Live app which lets you subscribe to cricket alerts and other services. Karbonn Zone is another app but it is just takes you to the Karbonn’s web portal. There are all the other features you would expect from an Android smartphone. Many of the Google apps are preloaded like the Gmail, Google Search, Google+, Google Maps, Hangouts, Play Books, Play Movies, Play Store and YouTube. Chrome is one notable missing app but you can easily download it from the Play Store.

The Music and Video players the Titanium X comes with are very basic indeed with not a lot of features. The music player does not offer a lot of options and the video player does not support various popular codecs. There are a lot of video and music apps in the Play Store so this is not really a problem.

The Karbonn Titanium X comes with a 1.5 GHz Quad-Core MediaTek MT6589T chipset along with 1GB of RAM. Considering the stock nature of the user interface, 1 GB RAM should be fine and it’s fine mostly. The real world performance is pretty decent most of the time with everything working fluidly enough but there are a few times (infact very few) when we notice just a hint of lag which isn’t expected really from a Quad-Core smartphone.

Check out some of the benchmark tests we did on the device and the results were average. The basic tasks work great but there is some stuttering at times while multitasking between a lot of apps. On the gaming front, the casual games work great but high games run a bit inconsistent on the device.

The ‘phone’ in the smartphone works great as we had no problems with the network or call quality.

Karbonn Titanium X comes with a 2300 mAh battery which is non-removable, reason is the the unibody design. The battery will last a day on medium usage like two synced email accounts all the time, some media playback, some browsing and of course some calls which is what we expected. The battery life is average at best.

While the hardware on the device boasts of an awesome camera on paper with the primary camera being a 13 MP one with dual-LED flash and a 5 MP front facing camera with an LED flash. Though, the real life performance of the camera doesn’t really match up to those high numbers. First, talking about the interface. The camera viewfinder interface is simple and allows you to reach most of the options easily. There are various shooting modes like HDR, Panaroma along with Face detection modes, Best shots among others. You can find the other options like white balance, exposure and other basic stuff in the settings.

We took some pictures with the 13 MP primary shooter and quite frankly, Karbonn hasn’t given much time in optimising the camera unit and pictures we took were disappointing to say the least. Check out some of the pictures we took using the Titanium X: Although the colors in the pictures were spot on, they seemed to be a tad too much on the brighter side. We can say the pictures taken during day time are strictly okay but the night time pictures are nothing to write home about. There’s a lot of noise in the low light and night time pictures. Even with the flash on, it fails to take a good enough picture. Talking about the front facing 5 MP camera with an LED flash, it is great if you are a selfie addict and pretty good for video chats too.

On the videos front, the device is capable if capturing recording [email protected] videos. The videos captured with the device are okay in good lighting conditions but as soon as we have low light conditions, we start getting videos with lots of noise and grain on the edges.

The Karbonn Titanium X surprisingly comes with a single SIM while the competition has dual-SIM capabilities. On the connectivity front, it is one of few smartphones in its price range to come with NFC. Then there’s 3G, Wi-Fi 802.11 b/g/n, Bluetooth 4.0 with A2DP, aGPS. There’s USB On-the-go support as well which is quite pleasantly surprising. The usual sensors like the proximity sensor, accelerometer and gyro are all present.

Karbonn Titanium X makes a pretty bold statement to the competition with its unibody design and brilliant display but there are a few shortcomings like not having dual-SIM capability, below-par camera. The competition is with the likes of Micromax Canvas Turbo and Gionee Elife E6 but if you want an Android smartphone with a beautiful Full HD display and different looks then you should consider the Titanium X.