The Lenovo P2, which was launched in India earlier this year with Android 6.0 Marshmallow, is now receiving the Android 7.0 Nougat update in the country. This software update, which is being rolled out to the P2 in India, not only bumps up the P2 from Marshmallow to Nougat, but, it also comes with Google’s February 1, 2017 security patch for Android. As this is a version update, it’s pretty large in size, 1957 MB to be precise, hence, it would be wise to download it over a Wi-Fi connection to save your time and money. 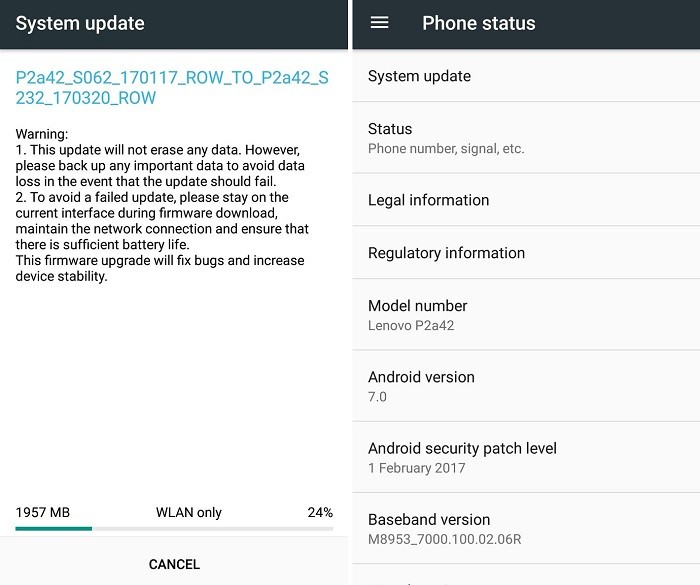 With this Nougat update, Lenovo P2 gets new features like multi-window, direct reply, bundled notifications, improved Doze and much more. Also, just to refresh the memory, the Lenovo P2 comes with Snapdragon 625 SoC under the hood which is laced with either 3  or 4 GB RAM and Adreno 506 GPU.

The device sports a 5.5-inch Full-HD Super AMOLED display, and to keep this entire package running, the device ships with a massive 5100 mAh battery which also has support for 24 W quick charging. Besides, the P2 also has a fingerprint scanner on the front which is housed on the physical home button, and, it also supports 4G VoLTE.

Coming back to the Nougat update, it’s already being rolled out to all the users in India, hence, you should see an update notification on your P2 soon. However, if you don’t, you can check for it manually by going to the Settings > About phone menu.