Moto Z2 Force, being the top-of-the-line smartphone from Motorola has entered the race competing with the OnePlus 5T. It’s the fastest Motorola device in the Moto Z family and can be flexibly upgraded via Moto Mods. Moto Z2 Force’s special ability to survive accidental falls with its new ShatterShield technology is something new, it’s a screen protector designed to make the screen unbreakable.

Motorola has added a new smartphone to its Moto Z lineup last month, but it sounds like Motorola is late to the party for the Indian market. In a world where manufacturers have started unveiling its next-generation smartphones with a bezel-less design, new flagship chips (Qualcomm Snapdragon 845), and AR technology, the Moto Z2 Force feels antiquated, especially with its large top-bottom bezels. Let’s see what it has to offer in our Moto Z2 Force review. The Motorola Moto Z2 Force consists a very high-quality rigid 7000 series aluminum chassis boasting a 6.1 mm ultra-thin modular design. It’s sleek, ultra-slim, and light in weight and gives you the grip holding it. The back houses the Moto mods connector pins at the bottom while on the top is a big round protruding dual 12 MP cameras that feature Monochrome and Depth effects.

The modular design hooks up Moto Mods which are the hardware components like cameras, rechargeable batteries, speakers, and projectors, that can be magnetically docked at the back of the phone. The Moto Z2 Force comes with a TurboPower Pack battery Mod worth 3,490 mAh capacity.

No wonder the construction is rock solid which won’t break easily, it’s no surprise that the design is pretty much identical to the Moto Z2 Play, but now with the addition of the shatter-proof glass screen protection, it’s almost indestructible. Unlike other top-class phones, the Moto Z2 Force is only spash resistant eventually missing the IP67/68 certification for water-proofing.

The front houses a fingerprint scanner that works for gesture-based navigation. In addition to the gestures, the Moto Actions has a number of gestures such as chop twice for the flashlight, twist for the camera, you know it if you are familiar with moto phones. Some users may miss the 3.5 mm jack, but the provided USB adapter converts the port to 3.5 mm which shouldn’t be a problem. The USB Type-C port operates at version 3.1 standard i.e. faster data transfer than most phones, if not all. The SIM tray provided is hybrid and only one 4G connection is usable at a time, second SIM will be moved to a 3G connection.

From the competition, the Moto Z2 Force stands out by its ShatterShield feature that is rarely found on the smartphones. Motorola’s 4-year guarantee states that the screen is unbreakable if dropped from a 5-feet height on a hard floor without any drama. The only drawback of the screen is it gets scratched which likely is inferior to the scratch-resistant Gorilla Glass protection found on many phones.

The display is a 5.5-inch POLED with Quad-HD resolution (2560 x 1440 pixels) featuring the traditional 16:9 aspect ratio. No, it’s not a bezel-less type display with the fancy 18:9 aspect ratio, the Moto Z2 Force has large top and bottom bezels which makes the phone look a little old-school.

The display is essential for outdoor use, it benefits from its high brightness and a deep contrast, the viewing angles are good enough. It offers the usual stock display enhancements like the color mode. 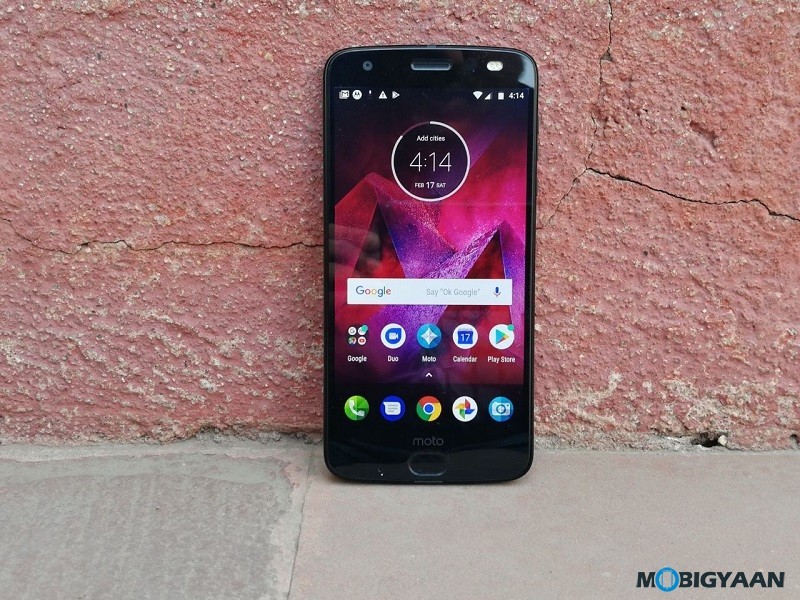 On the software side, it no more runs on Nougat, Android 8.0 Oreo straight out-of-the-box. The Moto Z2 Force offers the Android Oreo version 8.0 with stock features which Motorola phones are probably known for. The last security patch installed on it is dated 1st December 2017.

Speaking about the software traits, there’s nothing new in the software other than the stock Android Oreo features and camera optimizations which will be covered in the upcoming camera section. The Moto gestures are already there at the time of Moto G5 Plus.

Refer to our previous reviews of Moto phones to know more about the software. As a flagship, the Moto Z2 Force is powered by the high-end Qualcomm Snapdragon 835 octa-core SoC consisting eight Kryo 280 cores clocked at maximum 2.35 GHz. The Snapdragon 835 competes with the Huawei Kirin 970 and Samsung Exynos 8895.

The 4 GB RAM variant isn’t launched in India, the RAM is bumped to 6 GB (LPDDR4X-type) to compete with the OnePlus 5T. The Moto Z2 Force has only 6 GB RAM variant in India. Graphics are handled by Adreno 540 GPU for graphics-intensive tasks and gaming. Current Android games that demand high graphics won’t have a problem running on the device. Overall the GPU is very good for gaming on the phone. Gamers will surely fancy the Moto Gamepad Mod, a handheld gaming console joystick that snaps with the Moto Z2 Force.

There’s only one storage variant i.e. 64 GB with support for a micorSD card on SIM2 that expands up to 2 TB. A standalone microSD would have been a better alternative than providing a hybrid slot, but compared to the competition, the OnePlus 5T misses out on the microSD card slot and that gives a plus one to the Moto Z2 Force.

Anyways, the storage performance of the storage is merely similar to the ones that occupy a UFS 2.1 storage. It’s certainly better than OnePlus 5T, and at par with the Honor View10, Sony Xperia XZ1, as well as Samsung Galaxy Note8. Our test indicates speeds over 700 MB/s (read) and over 200 MB/s (write) turns out that it’s faster than many phones.

For its RAM performance, the A1 SD Bench scores a 7,410.99 MB/s copy speed which is approximately closer to the phones that are mentioned above. To stack up against the rivals, Motorola has put two cameras on the phone featuring True B&W which is a rip-off name for Monochrome. The camera onboard offers two 12 MP sensors on the rear side that takes Bokeh shots, scans objects with its Object & Image Recognition technology and a few other camera traits you can find in the depth mode. The camera supports laser autofocus and dual-tone LED flash.

The front 5 MP camera has a wide-angle lens which is good for group selfies. It is also backed up with a dual-tone LED flash that takes care of the low-light selfies.

The dual main camera equips a Sony IMX386 sensor with a f/2.0 aperture. The final output is a combination of RGB and Monochrome sensor that captures a colored image and a B&W image with the intensity of light respectively. It also enables better low light shots with this kind of setup. The dual cameras on the Honor and Huawei smartphones work in a similar aspect.

The camera features interesting effects, for example, the Depth mode adds a bokeh effect in the background which later enables you to adjust the focus in the foreground or background. Moreover, the Depth editor can replace the background with any sort of images saved on the device.

In addition to the True B&W effect which is actually Monochrome effect, the editor also enables you to select a color. The image goes Black and White while the main subject continues to be focused and displayed in color.

During daylight, the Moto Z2 Force takes good and sharp images but weakens in the low-light conditions. Images tend to blur when there’s less light due to the missing OIS. The cameras on the Honor View10 and Sony Xperia XZ1 has better low-light results.

The front 5 MP camera takes decent shots. I believe it’s the same camera that initially used on Moto G5 Plus or the Moto Z2 Play, but with a wide-angle lens and dual-tone LED flash to support low-light selfies. It is surprising to know that Motorola has put a better front camera on the Moto X4 which sits just between the Moto G and Moto Z lineup.

The optional Moto 360 Camera Mod (19 MP) allows you to shoot 360 degrees photos and videos in 4K. It is a camera accessory and needs to be purchased separately. In terms of battery, the Moto Z2 Force paks a 2,730 mAh that performs just as average or slightly above. But when combined with the TurboPower Pack Mod, it boosts the battery runtime smashing the OnePlus 5T, Samsung Galaxy S8, and Sony Xperia XZ1.

The combined power of the Moto Mod offers a solid battery performance totaling a capacity of 6,220 mAh which you won’t find on any other flagship. The TurboPower Pack Mod can be activated from the notification panel or from the settings.

Speaking about how long it runs, the Moto Z2 Force lasts a day and a little more on average use with 6 hours of screen-on-time. Paired with the Battery Mod, it doubles the battery runtime. It supports fast charging with its TurboPower technology which takes about 100 minutes for charging the battery from 0% to 100%. Motorola has managed to put as much into the Moto Z2 Force, an unbreakable POLED display which is brighter than many phones, a flagship Snapdragon 835 chip for outstanding performance, dual 12 MP cameras for Depth effects and Monochrome shots, Android Oreo out-of-the-box for a futureproof OS,
the Moto Z2 Force is a great deal for Moto lovers.

The camera is undoubtedly good in strong lighting conditions but weakens in low-light scenarios. The camera on the Honor View10 and Sony Xperia XZ1 has better low-light results.

Although the good thing about the phone is the unbreakable display, perhaps, the drawback here is the plastic protection that is vulnerable to scratches. The battery combined with the TurboPower Pack Mod offers a solid battery performance. It does run better than OnePlus 5T, Samsung Galaxy S8, and Sony Xperia XZ1.

Moto Z2 Force is still a considerable option as compared to its rivals, the shatter-proof display is one of the reasons to recommend and its modular design which makes it a standout among others. The microSD support is a plus if compared to OnePlus 5T that leaves to be desired.

Here are the Huawei P20, P20 Lite and P20 Pro with small bezels and a notch