Moto G5 Plus Review – Camera Phone on a budget

Moto Gs are always aimed at the midrange smartphone market and no doubt they are great at what they offer. Motorola recently launched the Moto G5 Plus which is the 5th generation of the Moto G series smartphone with one of the key features highlighted as 12 MP f/1.7 dual pixel rear camera. The camera hardware seems very close to the flagship Samsung Galaxy S7, so is it that Moto G5 Plus has the best camera on a budget? What about the other aspects? Is it worth the price? Let’s find out in the Moto G5 Plus review. Moto G5 Plus got smaller, it boasts a 5.2-inch display and all-metal design. Wait, not exactly full metal unibody, it has a diamond-cut aluminum finish back while there are rounded edges made from plastic. Since the design is now metallic, Moto G4 users may find it appealing. However, it is not really surprising for those who have used a metallic phone in the past.

Motorola has reworked the design to focus on the soft curves which make the phone easier to hold. It’s quite thin 7.7 mm and 155 grams light in weight. It does feel solid but slippery due to its sleek backplate. The overall design has a nice finishing and adds a premium flavor.

On the camera side, the Moto G5 Plus has a 12 MP f/1.7 dual pixel camera utilizing the Sony IMX260 Exmor RS Sensor which was seen in the last year’s flagship Samsung Galaxy S7. The camera supports dual-tone LED flash and 4K video recording. The front side has a 5 MP f/2.2 camera with screen flash and has the ability to record slow motion videos at 480p. Not much difference here when you compare the specifications with its predecessor Moto G4 Plus. I remember when Honor 6X almost doubled its specifications when compared to its old gen. Honor 5X. The camera on the Moto G5 Plus is a noteworthy followed by its gesture Home key used for navigation.

The right side has power key and volume control. They do feel very light and offer a good feedback. The top has the combo SIM Tray which holds two nano SIM cards and a Micro SD separately. The phone supports 4G network and VoLTE calls.

Motorola still decided to keep Micro USB, not the Type-C port. Furthermore, there are two microphones, one at the bottom and the other alongside the rear camera. You will also find a 3.5 mm headphone jack, but no earphones are bundled.

Moto G5 Plus is accompanied by a 5.2-inch Full HD IPS display with a resolution of 1920 x 1080 pixels. The display is covered with a Corning Gorilla Glass 3 but there is no 2.5D curved glass on top. A 1080p display on a 5.2-inch size screen reflects sharp pixels. The brightness levels are decent but do not expect much from it.

The display albeit is not AMOLED, it still uses its Moto Display trait we saw on their flagships. With Moto Display, you can see your notifications at a glance when you pick the phone up. The display enhancement has two color modes – Standard which displays realistic color, and Vibrant mode that displays enhanced colors and saturation. Moto G5 Plus offers pure Android experience with Android 7.0 Nougat out of the box. This is one of the things I like on Motorola phones. While others are still playing around with the Marshmallow version of Android, Motorola offers the latest Android updates and patches.

The software has all the quirks and perks from Android 7 Nougat including the Multi-Window, Quick Reply, and more. To know what’s new in Android 7 Nougat, check out the 5 Best Features Of Android 7.0 Nougat You Should Know. Motorola offers gesture-based controls like Chop Twice for Flashlight, Twist To Open Camera, Swipe to shrink screen and a few more. The best thing I find is its Home key which also has a fingerprint embedded on it. The specialty of this gesture key is that this one key will help you navigate and do all things without much fuss, unlike where other phones still using the three navigation keys.

The Home key works like this, swipe left to go back, swipe right to visit recent apps, and tap once to go to homescreen, tap and hold a little to lock the phone, and tap and hold longer to access Google Assistant. You can unlock the phone with its super fast fingerprint scanner, just that it doesn’t work when you have wet fingers. The mid-range phones are getting more and more powerful, Moto G5 Plus is powered by a Qualcomm Snapdragon 625 SoC combined with 4 GB of RAM and 32 GB internal storage as its top variant. Underneath the hood, there are eight Cortex-A53 cores clocked at 2.0 GHz highest. Of course, it does not compete with the current flagships but knowing that the Moto Z Play offers the same hardware, the Moto G5 Plus gains a value.

For a midranger, the Qualcomm Snapdragon 625 is a perfect choice, which balances the performance and battery life. Moto G5 Plus in our test performed well. We have not found any lags till now on the software interface. Apps and games run just fine. Hence, the kind of performance is justified for the price. There are smartphones offering similar hardware priced either lower or higher than Moto G5 Plus. So, the G5 Plus sits right between them. The benchmarks we gathered are mainstream. Most phones in this category usually show similar numbers. AnTuTu scored well with 62,422 points. Geekbench 4 scored 772 points (single-core) and 3,627 points (multi-core). The Adreno 506 GPU gave a score of 2,033 points on Geekbench 4. Quadrant Standard Edition scored a nice 19,356 points. The Moto G5 Plus runs most games well, however, games that require heavy resources may not run smoothly. The gaming performance is decent. Asphalt 8 runs just fine. We also ran Fatal Fight, Mortal Combat X, Roll the Ball, Ninja Arashi, and Mario Run. All games played well without any lags.

Games Tested on Moto G5 Plus We didn’t find any heating issues with the Moto G5 Plus. The temperatures are under recommended levels.

Moto G5 Plus has least internal storage, it offers a 16 GB internal storage that expands with a Micro SD till 128 GB. The higher variant offers a 32 GB storage along with 4 GB RAM. While the rivals are offering a 32 GB and 64 GB storage options, Moto is still stuck with the low 16 GB onboard storage. It could be a great value phone only if Moto had provided a 64 GB storage instead of 32 GB. We performed storage benchmarks to see how fast is the storage. Unfortunately, the benchmarks show average results. The worst is the write speed (both sequential and random) which is close to what ₹10,000 phones offer. On the camera side, the Moto G5 Plus equips a 12 MP dual pixel camera (Sony IMX260 Exmor RS) with a large f/1.7 aperture. The megapixels appear to be lower than the average 13 MP cameras you see on most budget phones, but the camera actually does a great job capturing photographs. A larger aperture (f/1.7) allows more light to be captured especially in low light conditions. The front equips a 5 MP f/2.2 camera that can capture 480p slow motion videos.

You can open the camera quickly by twisting the phone twice. 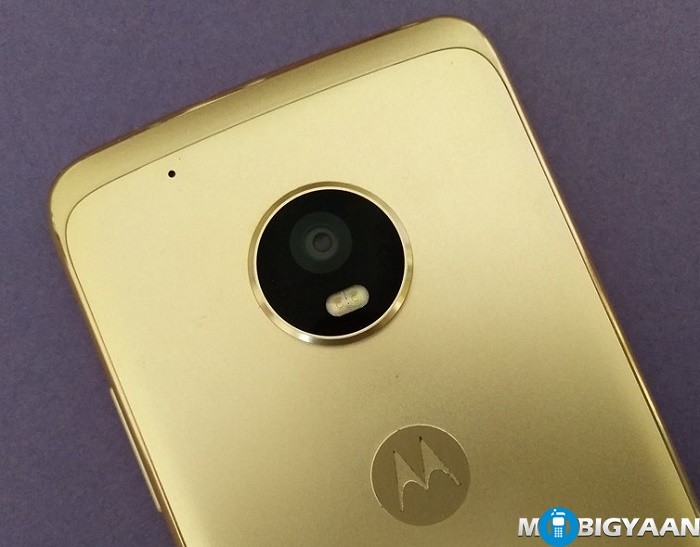 The camera app is quite stagnant, provides basic camera features. You can enter the Professional mode and Panorama from the bottom right camera icon. By looking at the camera specs, there’s plenty of room for the camera to offer other features but Moto has kept it simple.

It captures 4K videos at 30 fps and 1080p videos at 60 fps and that seems great in terms of the videography. Further, it captures slow motion 720p videos at 120 fps. Pretty close to OnePlus 3 camera features. The Moto G5 Plus is already ahead in the game. The camera performs utmost in the daylight, the results are surprising and there is no doubt, for this price you get a great camera. It has faster dual pixel focusing, the colors are accurate and there are plenty of details captured. With its wide f/1.7 aperture, it captures more lights giving the object better colors and details.

The downside is the camera, although performs well when there are more incoming lights, fails to capture details in low light, it snaps grainy images that slightly appears blurry. Take a look at the camera samples taken from Moto G5 Plus camera.

As the Moto G5 Plus is powered by Qualcomm Snapdragon 625 CPU, it should put less stress on the battery. Our tests are based on the 4 GB RAM variant Moto G5 Plus. The battery performance was mostly average or a tad higher than that.

But we know that a 3,000 mAh battery capacity is common on most devices priced at under ₹10,000. Moto G5 Plus could offer a little more battery power but, we can’t deny that it offers fast-charging technology that will charge the phone within half an hour. So, when in doubt, plug the fast charger and quickly charge the battery.

Users with high-end usage will find the battery a little underpowered. However, the battery standby time is good. For users who are using it less obvious will gain more battery life. We stressed the battery with numerous tasks with Wi-Fi, Bluetooth, and 4G data always on along with dual SIM option and no MicroSD. The results turned out to be average, we got 4.5 hours screen-on-time with a full day without charging. On moderate usage, you’ll get around 1.5 days with the same SOT.

It seems Moto G5 Plus is not the right fit for this price, there are other competitors that offer more, but it still feels reasonably made. It has cleaner software experience, more than average camera leaving its competitors behind and a gesture key which will eventually turn the tables. Lastly, it offers an NFC and a fingerprint scanner that works fast and accurate. Better for you if you’re upgrading from any previous Moto G-series phone. Just that you will lose the Moto G3’s water-resistant ability with this one. Otherwise, it has the all the quirks and perks a user needs on a smartphone.