There is no doubt that Sony has been using the same design over and over and the Xperia XZs looks a little identical to the Xperia Z5, however, exactly the same as XZ. The corners are round, there’s a 2.5D curved glass on top, the body is metallic and there are large bezels on the front. The curved design is an added comfort, there are no sharp edges like the Xperia Z5. You can easily hold the device in one hand.

The design is revamped though it looks beautiful, it still appears a little old school, especially in this generation where smartphones are going bezel-less and slimmer. Take OnePlus 3 as an instance, it has a slim single metal unibody and a tapered design which looks bold. And now with the Samsung Galaxy S8, the design language, starting from 2017, is going dynamic.

The good thing Sony smartphones offer is its water-resistant protection. The Xperia XZs is IP68 certified ensuring the device will live up if you take it into the water with a depth of up to 1.5 meters for 30 minutes. Sony has been widely known for its camera, and it managed to put a 19 MP camera in an 8.1 mm body.

The specifications are from the last year’s flagship devices like Samsung Galaxy S7 (Snapdragon 820 variant), LG G5, and OnePlus 3. There’s a Qualcomm Snapdragon 820 SoC with 4 GB LPDDR4 RAM and 64 GB internal storage that can be expanded with a MicroSD card. On the battery side, it owns the same 2,900 mAh battery we saw on the Xperia Z5. It runs on the latest Android 7.1.1 Nougat. 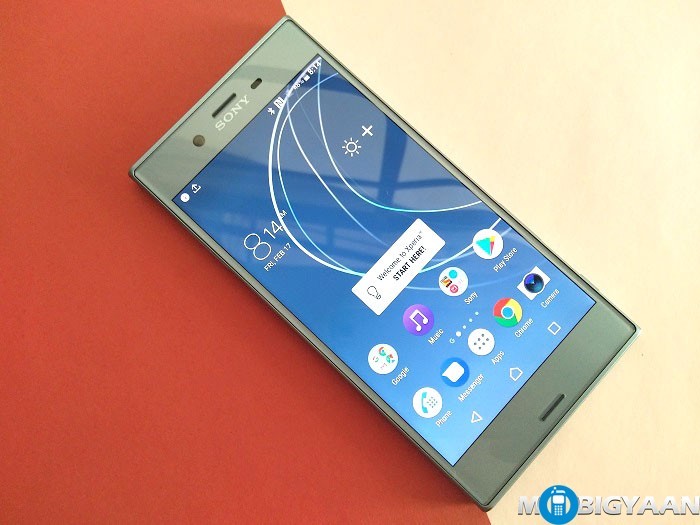 The Sony Xperia XZs uses a super bright 5.2-inch IPS screen with full resolution 1920 x 1080 pixels (424 ppi). It features TRILUMINOS and X-Reality technology improving the overall quality of the images. As for a fact that the display isn’t 4K, we need to agree that it caters very well in the battery savings.

The navigation keys are stuck inside leaving large bezels that might look ugly for some people. The buttons’ location are the same as we saw in the Xperia Z5. You get a dedicated camera key, a power button on which a fingerprint scanner is mounted, and the volume keys that can be used for camera zooming. Xperia XZs now comes with the USB Type-C port, two microphones on top and bottom) and a 3.5 mm port to plug-in your earphones. It supports 4G network with VoLTE support. The SIM tray holds two nano SIM cards both GSM. The SIM2 can be replaced with a MicroSD card. Bottom Has A USB Type-C Port

In our initial look, the Sony Xperia XZs, priced at ₹49,990, feels the same as Xperia XZ which was landed in India last year in September (now available for ₹39,990). In that case, if you like the Sony Xperia XZs, you can still get its identical XZ variant without the super slow motion functionality. The difference is the new camera sensor, the rest is all same.

We would love to review the device and tell you if its slow motion camera is really worth the shot. Stay tuned.