Vivo recently launched the Vivo Z1 Pro smartphone in the Indian market and now the company is gearing up to launch yet another smartphone. As per the reports, the Chinese company is planning to launch the Vivo S1 in India very soon.

The Vivo S1 smartphone was launched a few months ago in the Chinese market. However, the company has not yet revealed the launch date of the phone in the Indian market but the leaked image shows that the phone is “Coming Soon”. 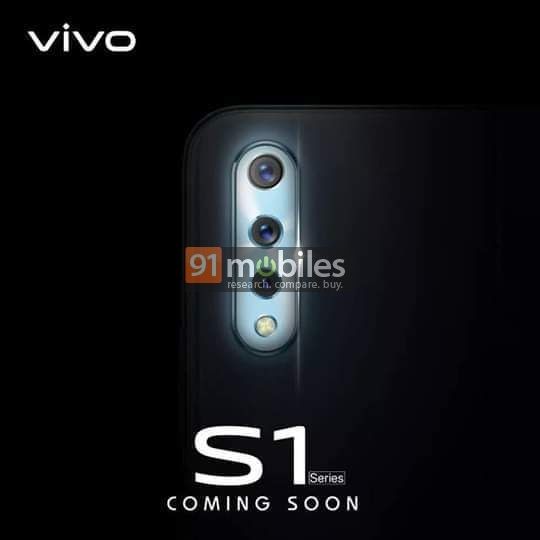 It is being said that the Vivo S1 is the re-branded version of the Vivo V15 smartphone, which is already available in the Indian market. So, this could mean that the Indian variant of the Vivo S1 might be different than the Chinese variant.

The phone comes with a 6.53-inch Full-HD+ notch-less display with an aspect ratio of 19.5:9. Under the hood, the device is powered by MediaTek Helio P70 SoC along with 6 GB of RAM. Since there’s no notch on top of the display and minimal bezels, the front-facing camera sensor is placed inside a pop-up slider. It has a 25 MP camera sensor with f/2.0 aperture but the Indian variant is said to come with a 32 MP snapper.

On the backside, it features a triple camera setup. The rear camera configuration includes a 12 MP main sensor, an 8 MP wide-angle lens, and a 5 MP depth sensor. There’s also a fingerprint sensor placed just below the camera module. The phone is powered by a 3940 mAh battery with 18E fast charging support.

It packs 128 GB of internal storage, which can be expanded up to 256 GB using a microSD card. In terms of software, the device runs Android 9 Pie OS out of the box with the company’s own FunTouch OS custom user interface.

Connectivity options on the device include Dual SIM, 4G VoLTE, Wi-Fi, Bluetooth, and GPS. It also comes with Vivo’s own voice assistant Jovi. There’s also a Game Mode, aimed at improving the gaming performance as well as experience.

How to run two WhatsApp accounts on Xiaomi Redmi 7A [Guide]