Xiaomi has launched its selfie-focused Redmi Y series smartphone in India this year, the Redmi Y3 is the successor to the last year’s Redmi Y2. Being a selfie-centric smartphone, the key highlight of the Redmi Y3 is its 32 MP Super Selfie Camera with support for AI Beautify 4.0 and AI Portrait mode. Other features include a glass finish design, a notched display, and a large 4,000 mAh battery. Here’s our review of the Xiaomi Redmi Y3. The Redmi Y3 boasts a glass finish design, unlike the predecessor which had a metallic back. The back offers a gradient color with a reflective design which looks amazing as compared to the Redmi Y2. Also on the back is a fingerprint scanner alongside AI-enabled dual cameras assisted by an LED flash.

The front side has a full-screen display with a Dot notch that carries the 32 MP selfie camera. The screen is covered with Corning Gorilla Glass 5 and 2.5D curved glass design. As far as the design is concerned, the Redmi Y3 has the latest design trends to offer.

Moving to the sides, the right side offers power and volume keys whereas the left side has SIM tray with a microSD slot dedicated. The SIM tray supports dual 4G SIM cards and dual VoLTE support.

On top, you will find an IR Blaster, a 3.5 mm jack, and a microphone while the bottom comes with a micro USB port, loudspeakers, and another microphone. A USB Type-C port would definitely give an edge in this segment. 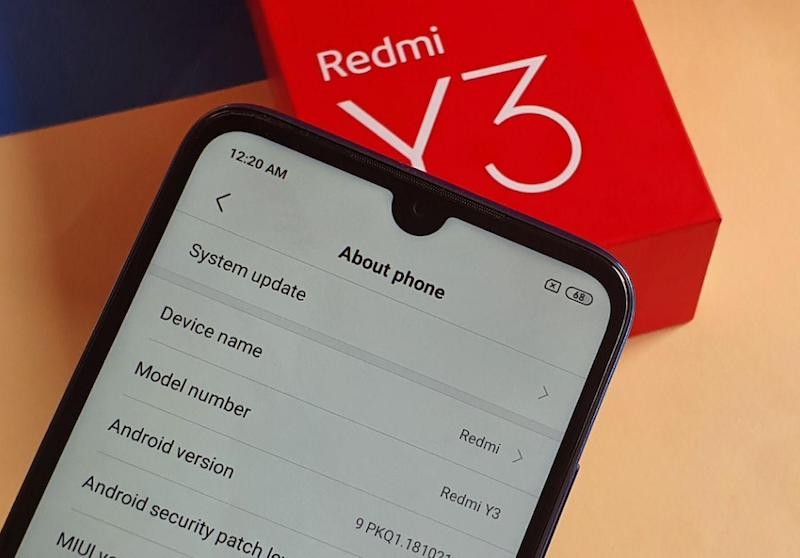 The Redmi Y3 sports a 6.26-inch display with a Dot Notch on top which carries the 32 MP Super Selfie Camera. The screen uses an IPS panel having a resolution of HD+ (1520 x 720 pixels). It seems the HD+ display is for the battery saving traits, lower resolution displays tend to consume less battery. The viewing angles are good and the colors are well balanced. The Redmi Y3 does come along with Android 9 Pie out-of-the-box with MIUI 10 on top. Speaking of the software, the MIUI interface has loads of features built-in that you can make use of. We didn’t notice any major lags on the device, the interface is clean and smooth.

When we talk about the pre-installed apps, the Redmi Y3 is bloated with apps and you may see ads running on them when in use. You may either ignore it or remove them from the device if unwanted.

To know more about the MIUI 10, head to our previous Xiaomi devices reviews with MIUI 10 in it. Under the hood, the Redmi Y3 packs a 14nm Qualcomm Snapdragon 632 SoC with octa cores Kryo 250 clocked up to 1.8 GHz. The chip is paired with up to 4 GB RAM and 64 GB storage which is further expandable via a microSD card on a separate slot.

Moving to the benchmarks, the Redmi Y3 scores 103,118 points in AnTuTu, 1229 points (single CPU), 3,988 points (multi-CPU), and 3,874 points in GPU benchmark. The scores are very decent given the price and should not be a problem for the average user. Playing games such as PUBG Mobile won’t be an issue, the GPU can handle games on low to medium settings. If you are a gamer who wants better graphics, go with a phone with a faster processor and graphics processor. The Redmi Note 7 is far better in terms of performance and gaming unless you are a selfie lower, you should stick to the Redmi Note 7 if choosing among the two.

Compared to the predecessor which has a 16 MP selfie camera, the Redmi Y3 doubles the pixel count and it is notably a huge jump in the camera department. The front camera also comes with an 80-degree field of view for taking group selfies and a feature named ‘Shake-free Selfie’.

To see how good the Redmi Y3 take selfies from its 32 MP Super Selfie Camera, we got some samples to share with you alongside the samples taken from the rear camera as well.

There’s no doubt the camera is amazing, the selfies turn out to be very good selfies, the photos clicked using the 32 MP camera are crisp and full of details. To capture selfies in 32 MP, you need to select 32 MP option from the camera menu on the top.

You can easily get more than a day battery life on above moderate usage, the Redmi Y3 has a decent battery backup. This is due to the HD+ display and the power-efficient Snapdragon 632 CPU which puts less burden on the battery.

Take a look at the battery test table below which shows how much the apps consume the battery in a certain period of time. The Redmi Y3 is the first smartphone to sport a 32 MP snapper on the front side as far as this segment is concerned and of course, it’s value for money. The Redmi Y3 has a decent package to offer especially if you are a selfie lover on a budget, for those looking for a phone with a great selfie camera at a lower price tag, the Redmi Y3 is recommended.