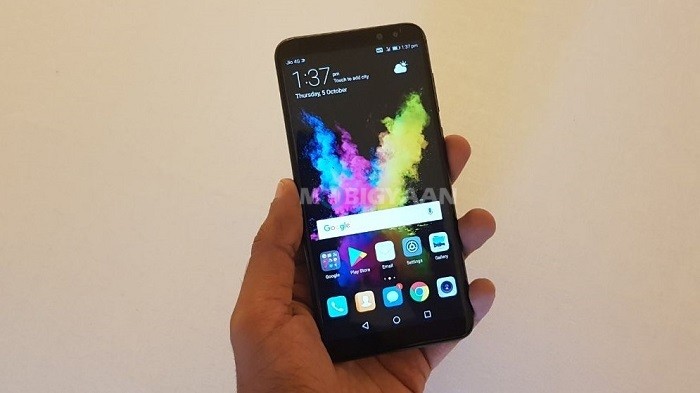 The Honor 9i isn’t any new smartphone, rather, it’s just a rebranded Maimang 6 that Huawei launched in China last month, and the Nova 2i that was launched in Malaysia earlier this week. The Honor 9i boasts a uni-body metal construction and has a screen-to-body ratio of 83% which helps keep the overall footprint of the smartphone relatively small while cramming in a larger screen. Speaking of screen, the Honor 9i sports a 5.9-inch FullView display that has a resolution of 2160 x 1080 pixels and an aspect ratio of 18:9. Well, as the bezels are smaller, there’s no fingerprint scanner below the display. It’s now moved on to the back.

Having said that, another highlight of the Honor 9i are the quad cameras. Yes, it comes with four cameras. Two at the back and two on the front, which means you can also take selfies with Bokeh Effect. The dual camera setup on the front consists of a combination of 13 MP and 2 MP snappers with Toning Flash, and, the one at the back has a pair of 16 MP and 2 MP sensors with LED flash.

Speaking of the innards, the Honor 9i is powered by Kirin 659 SoC which is coupled with 4 GB RAM and backed by Mali-T830 MP2 GPU. It runs EMUI 5.1 based on Android 7.0 Nougat, and, comes with support for gestures like drawing ‘S’ to take long screenshot, double-tap with one finger for normal screenshot, and, double-tap with two fingers to activate screen recording.

The Honor 9i, like many other smartphones, also supports 4G VoLTE, and, keeping this entire package running is a 3340 mAh battery.

“Today is an extremely important day for us in our India journey so far. We are thrilled to launch a phone which can be termed a global first, as the Honor 9i is the only phone so far to boast of two dual cameras and FullView FHD+ display. As frontrunners in bringing breakthrough technology as well as great features at attractive prices, we remain committed to bringing best-in-class devices and services to our users in India.” said Mr. Peter Zhai, President, Huawei India Consumer Business Group.

Honor 9i Price in India and Availability