Samsung has launched a new Galaxy M series in India and we have the Galaxy M20 that lies in the midrange segment. The Galaxy M20 has higher specs as compared to the Galaxy M10 which is an entry-level budget smartphone launched alongside. Here’s our hands-on with the Samsung Galaxy M20.

The Samsung Galaxy M20, like the Galaxy M10, is a budget smartphone, but comes with higher in specs, the CPU, the camera, and the battery are an upgrade. The M20 mainly competes with the likes of Xiaomi Redmi Note 5 Pro and other similar smartphones.

The main highlight of the phone is the notch, there’s a so-called Infinity-V display that has a waterdrop-like on the top which offers full-screen experience. It has a 6.3-inch Full HD+ TFT display with a resolution of 2340 x 1080 pixels covered with a scratch resistant Dragontrail Glass on top.

About its design, you won’t find a metallic or glass design like it’s competitors, the build is glossy plastic altogether and doesn’t surprise when there are phones with a metallic build such as the ASUS ZenFone Max Pro M1. The back of the phone carries a fingerprint scanner whereas the Galaxy M10 doesn’t hold one. 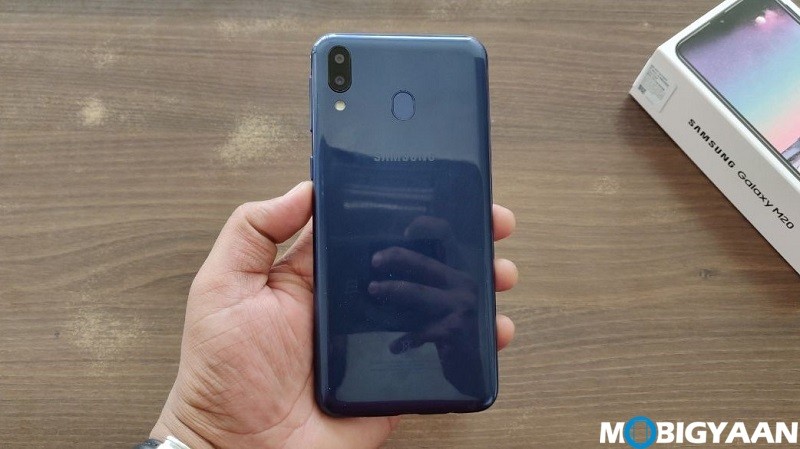 Talking about the processor of the phone, the Galaxy M20 packs an Exynos 7904 octa-core SoC instead of the inferior Exynos 7870 SoC found on the Galaxy M10. As compared to the Qualcomm chips, the CPU performance of the M20 lies between the Snapdragon 625 and Snapdragon 636.

The Galaxy M20 comes in two variants, one is 3 GB RAM with 32 GB internal storage and other is the 4 GB RAM and 64 GB internal storage. The storage can be expanded via a microSD card on a dedicated slot with up to 512 GB. It runs on Android 8.1 Oreo out-of-the-box with Samsung Experience 9.5 interface.

For imaging, the Galaxy M20 features dual cameras onboard, 13 MP + 5 MP in which the 5 MP is the wide angle camera. On the front end, you will find an 8 MP camera for selfie needs. The camera supports Live Focus, Stickers, Beauty, Pro, Panorama and other camera features offered by Samsung. 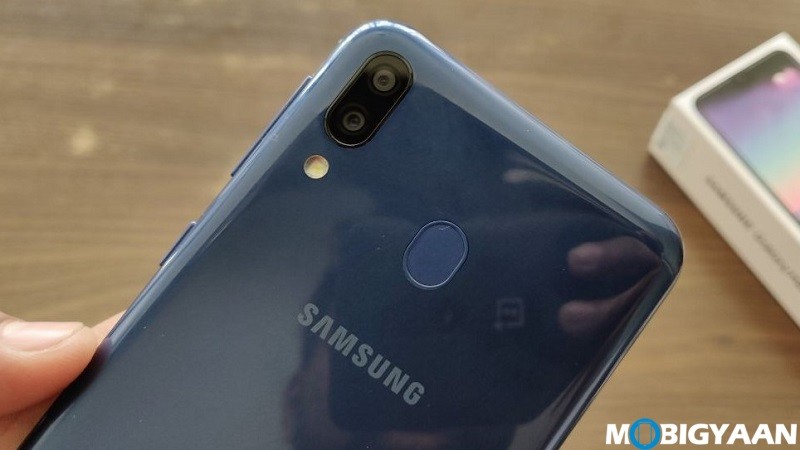 Another major highlight of the phone is the battery, the Galaxy M20 packs a large 5,000 mAh battery with support for fast charging. According to Samsung, the smartphone goes from 0 to 100% in 150 minutes which translates to 2 hours and 30 minutes for a 5,000 mAh battery.

The Samsung Galaxy M20 sports a triple slot tray on the left side in which you have the option to put dual 4G SIM cards and a microSD card separately. The right side offers power and volume keys while the bottom has surprisingly a USB type-C port with 3.5 mm audio jack, loudspeakers, and a microphone. The second microphone is at the top for noise cancellation.

The price for the Samsung Galaxy M20 starts at ₹10,990 for its 3 GB RAM and 32 GB storage variant while the second variant is currently priced at ₹12,990 for 4 GB RAM and 64 GB storage. It’s available in two colors – Charcoal Black and Ocean Blue and exclusively on Amazon India as well as Samsung India official online store.

What do you think of the new Samsung Galaxy M20? Share with us under the comments.

Vodafone ₹1699 plan launched for prepaid customers: Here are all the details