Xiaomi, one of the popular budget smartphone makers, has now launched the 4th generation handset of its Redmi series – Redmi Note 4 in India starting at ₹9,999. Redmi Note 4 is the successor of the previous generation Redmi Note 3 which received a lot of impressions due to its high-performance hardware with an extremely competitive price that sold over 3.6 million in sales in 2016 according to Xiaomi. We now have the midranger back with a few upgrades. Take a look at our hands-on with Xiaomi Redmi Note 4. 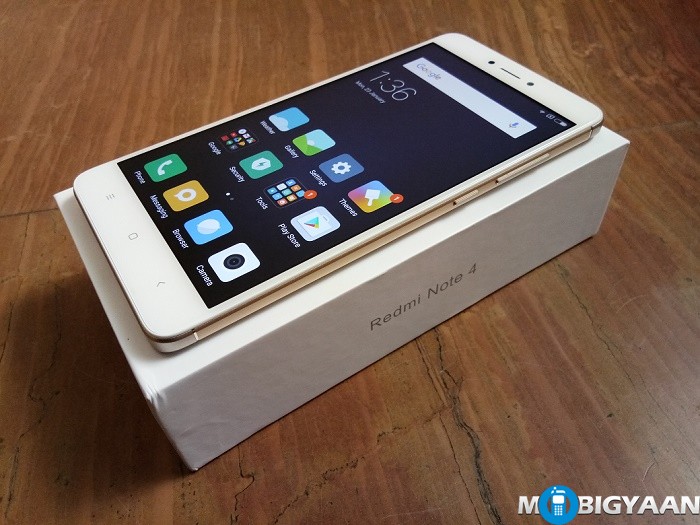 The looks have evolved, Redmi Note 4 uses a similar metal chassis from its predecessor but now with separation lines on top and bottom which are anodized glossy aluminum. Xiaomi didn’t sacrifice the premium design and kept the metallic body.

The edges aren’t sharp but tapered. They are rounded off to give a unique feeling while holding. The handset is 8.3 mm thin and weighs 165 grams. It somehow felt a little heavy when picked up, but considering it has a large battery, it was much expected.

The overall design is built solid and appeals to the eyes, thanks to the glossy separation lines. The front 5.5-inch screen is covered with a 2.5D curved glass and this is the first Redmi smartphone to feature a 2.5D design. Further specifications include a 13 MP camera on the back, 5 MP camera on the front, 4,100 mAH battery, a fingerprint sensor at the back. There are total three variants, one is with 2 GB RAM and 32 GB storage, the second is 3 GB RAM with 32 GB storage. The last one being the top-spec is 4 GB RAM and 64 GB storage which is available at a sheer price of ₹12,999. We are having the 64 GB variant for the review. The design isn’t particularly changed overall, the buttons and camera placement are intact, only the speaker is moved at the bottom which solves the speaker blockage issue. I still like the old curvy design, though. Anyways!

I would love if Xiaomi offers a Type-C USB port, but it looks like it’s reserved for its premium devices like Xiaomi Mi 5. Some of its rivals such as Coolpad Cool 1 Dual has started offering USB Type-C port.

Moreover, the phone is 4G and supports VoLTE calls. The Hybrid SIM tray can hold two SIM cards or one SIM and one MicroSD. MicroSD can be expanded up to 128 GB.

Upon turning on the device, you will be greeted with the MIUI 8.1 which is a custom OS from Xiaomi based on Android 6.0.1 Marshmallow. Xiaomi has told that an OTA of Android 7.0 Nougat preview will be available soon. And that’s pretty much exciting for us considering there are very few devices that run on latest Android Nougat update.

How do you like the new Xiaomi Redmi Note 4? If you own a Redmi Note 3, do you think it is worth the upgrade since the base price is kept the same? Here’s what we have to say about it. We’ll come back with the full Redmi Note 4 review.