Mobile Data in India got a lot cheap this year, and, we all know who should be thanked for this. Increasing competition has brought down the mobile data rates in India. As a result, not only people have started using the Internet more, but, the number of people using the Internet has also increased.

How to block Internet access to specific apps in MIUI 9

Step 2: Under the Security app, scroll down and tap on ‘Data usage‘. This will show you the total amount of data that’s being used by you in the current month. Below that, tap on a label that says ‘Restrict data usage‘. 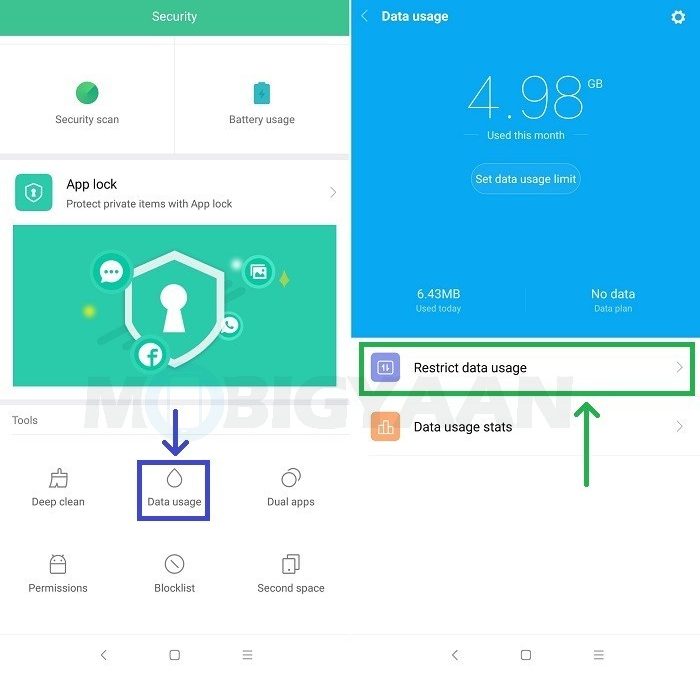 Step 3: Tapping on ‘Restrict data usage’ will present you with a list of the apps that are installed on your smartphone. You can also see two white-colored tick-mark icons in green circles. The first one icon is for Mobile Data and the second is for Wi-Fi. These icons appear in front of all the apps so that you can block Internet access via Mobile Data or Wi-Fi on per-app basis. If the icon is green, it means that the app is allowed access to the Internet. If it’s red, it means the Internet access is blocked. That said, if you want to block Internet access to all the apps at once – be it via Mobile Data or Wi-Fi – you can tap on the green-colored icons that are located at the top. Once you tap on them, they will turn red in color.

Also Read: How to open apps in Split Screen in MIUI 9 [Guide]

However, be careful that you don’t end up blocking Internet access to any apps in the Systems tab, unless you really know what you are doing, and, unless it’s a Google app like Gmail or YouTube.

Also Read: How to change default apps in MIUI 9 [Guide]

Well, we hope you were able to block Internet access to specific apps in MIUI 9 after reading this guide. For more, you can head over to our ‘How-To Guides‘ section.