7 cool things you can do with Android smartphone with Tasker, an Automation App

If you are an Android user, you must be aware that the level of customization offered by this OS is unparalleled. You can make the phone do what you want with some tinkering around. Sometimes, you need root access if you want certain features on your smartphone. But, there are many things you can get even without having to root your smartphone.

There are a variety of apps with which you can not only get features of a different version of Android on your smartphone, but, can also automate certain processes. Speaking of automation, Tasker is the only name which comes to mind. With this app, you can get greater control of your device, sometimes you may need root access and sometimes not.

If rooting a smartphone isn’t your cup of tea, we show you some cool things that you can do with Tasker without having to root your smartphone. Before we proceed, let us tell you that Tasker is a paid app which can be downloaded from Play Store. However, you can also download the trial version from here if you just want to check it out.

7 cool things you can do with Android automation app Tasker Keep screen on while reading on certain apps Smartphones these days have become bigger than they were some years ago. A phone with a screen size of 5 or 5.5-inch is common. Big screen phones are great when it comes to watching videos, playing games or making video calls. However, they are also great for reading. There are many apps available on the Play Store which would satisfy the reader in you. While smartphones are good for reading, we are often annoyed when the screen turns off while we are reading something with utmost interest. Of course, you can change the screen timeout on your smartphone, but, it’s applied to the entire device. Well, with Tasker, you can keep the screen on while reading on certain apps, let’s say Quora. This way, the screen will remain on while that specific app is open, but, the general screen timeout will be applied when you open some other app. Click here to see how you can keep screen on while reading on certain apps using Tasker.

Automatically play music when you plug in earphones Increasing amount of available storage on smartphones has made it possible for us to carry our music library with us so that we can listen to it whenever we want and wherever we want. People often listen to music while working out in the gym, travelling or studying. If you have ever traveled through public transport, you would have noticed many people listening to music with earphones on. Well, if you are a music lover and couldn’t wait to start playing music as soon as you plug in earphones, you should use Tasker. With Tasker, you can automatically launch the music app and play music immediately after you plug in the earphones in your smartphone. Click here to see how you can automatically play music when you plug in earphones. We all use smartphones and sometimes forget to switch it to silent mode or lower the volume of its ringtone when we are at an important place. Imagine you are at your workplace and suddenly your smartphone starts singing Eminem’s lyrics. A moment of embarrassment, right? The same can happen in a meeting or during a lecture if you are a student. Well, if you are someone who often forgets to lower ringtone volume at your workplace or during college lectures, you can use Tasker. With Tasker, you can automatically lower the ringtone volume during specific hours. Click here to see how you can lower the ringtone volume automatically during specific hours using Tasker.

Put your phone in silent mode by turning it upside down We often make use of the volume rocker to silent the phone when we receive a phone call. Well, there are many smartphones though which let you silent the phone by turning it upside down. If you happen to own a smartphone which doesn’t come with this functionality, you can use Tasker. Click here to see how you can put you phone in silent mode by turning it upside down.

Lock your smartphone by shaking it 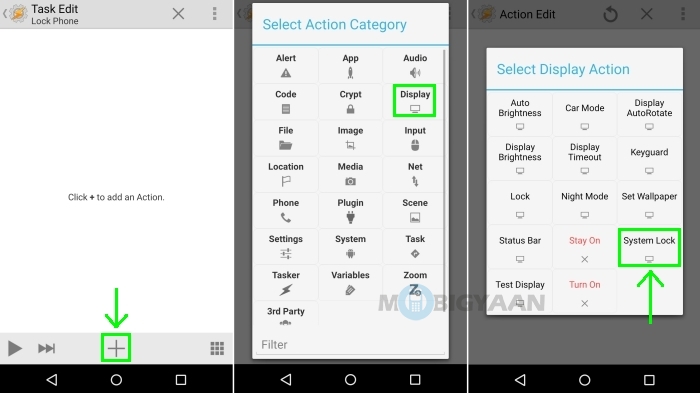 Well, that’s it. These are some cool things you can do with Tasker without breaking much sweat. Now of course, these were some simple things, but, to do some advanced stuff, you will need root access to your smartphone to be able to utilize Tasker’s automation prowess to its fullest.

If you have used Tasker in the past and done something cool, do let us know in the comments below and we too will give it a try.