It’s no surprise for us that the upcoming Android smartphones will emerge with a notch. After the Apple iPhone X, the Android phones have taken the path of the notch-enabled displays. ASUS ZenFone 5, Vivo V9, HUAWEI P20 Pro are some of the recent entries this year and we are sharing the list of Android smartphones with notch display launched in India. Check them out. The first Android smartphone that came to India with a notch is the Vivo V9, the selfie phone with glass body all around. Vivo V9 is almost similar to the iPhone X design with vertical dual camera setup, the front FullView display with a notch at the top that holds the 24 MP selfie camera, sensors, and an earpiece.

Vivo V9 boasts a 6.3-inch Full HD+ display using the new 19:9 aspect ratio display standard. Other than the display, the Vivo V9 is also a selfie phone with a 24 MP selfie camera priced at Rs 22,990 in India for 64 GB storage variant. HUAWEI has unveiled its flagship with three cameras on-board, the HUAWEI P20 Pro is the phone with a notch as well. The HUAWEI P20 Pro is considered as one of the top Android smartphones competing with the Samsung Galaxy S9+, Apple iPhone X, OnePlus 6 and others in the segment.

There’s an OLED display with a notch up top that carries a 24 MP selfie camera. The notch is way small as compared to the iPhone X eventually offers more screen space. Not only the HUAWEI P20 Pro, but you will also find the notch on the HUAWEI P20 and HUAWEI P20 Lite as well.

What sets it apart from the rivalry is the triple cameras on the rear side (40 MP + 20 MP + 8 MP) concealed in a stylish 3D glass body. Packed with Kirin 970 with AI features and running on EMUI 8.1 based on Android 8.1 Oreo, the HUAWEI P20 is the only smartphone as of now in the top end premium category that offers a notch. 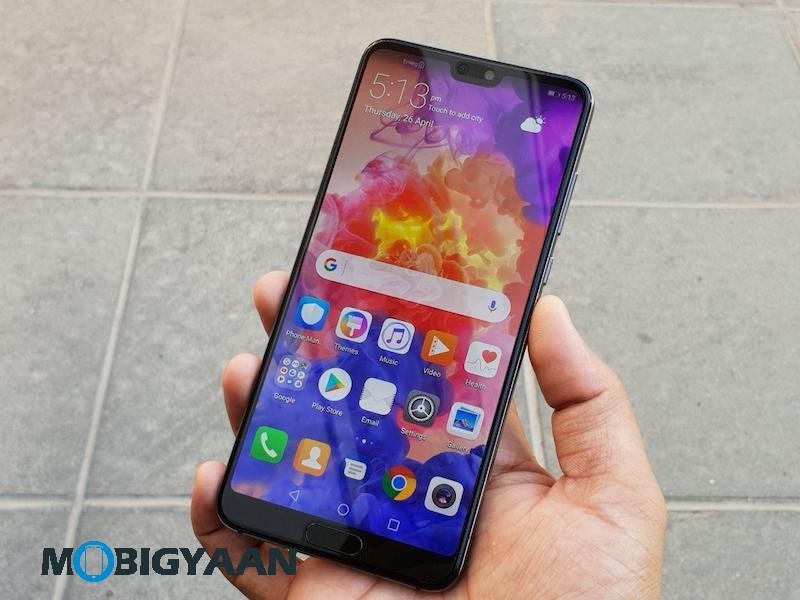 OPPO F7 is also among the notched display phones, featuring a 6.23-inch 19:9 FullScreen display with a resolution of 2280 x 1080 pixels. The main highlight of the phone is the notch at the top that carries a 25 MP camera for stunning selfies. The most anticipated smartphone of the year, OnePlus 6 is the flagship killer featuring a 6.28-inch FullView notch display. Aside from its hefty specs, the OnePlus 6 offers a Full HD+ AMOLED display with an aspect ratio of 19:9 and a notch at the top. The notch is smaller than the iPhone X notch and holds the 20 MP selfie camera, earpiece, and sensors.

Talking about the specs of the OnePlus 6, the internals includes a fast Qualcomm Snapdragon 845 SoC paired up to 8 GB RAM and 256 GB storage. The dual camera at the back is a combination of 16 MP + 20 MP with features like 480fps slow motion and 4K video recording. The price starts at $529 for 6 GB RAM and 64 GB storage. The affordable variant of the higher end HUAWEI P20 Pro and HUAWEI P20 is the HUAWEI P20 Lite which provides dual cameras instead of three and glass design. It is also plagued with the notch on its 5.85-inch display and it’s the cheapest smartphone to own a notch as of now. Specs are mostly similar to the Honor 9 Lite, Honor 7X, and Honor 9i. With that being said, more Android smartphones will come with the notch. You can share the ones that you know in the comments.